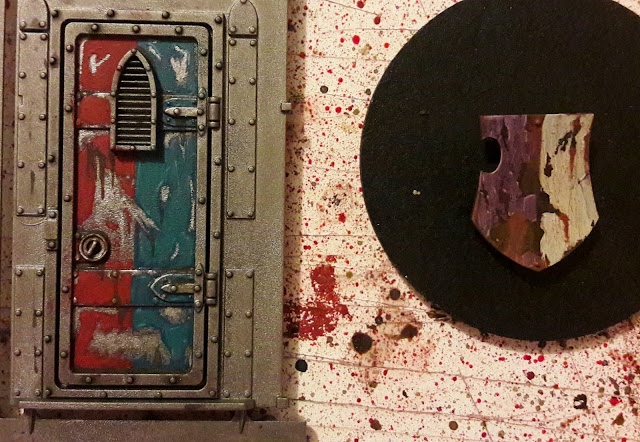 So! With the release of Fogebane I have 2 boxes opened in my flat with the mechanicus taking their place on my ever swelling to-do pile! I am keen to have this army look quite beaten up and spend a lot of time (too much time one might say) on their bases for a really characterful army.

I'm not a huge fan of the painted on chipping damage myself, I will be making use of it for the Sons of Wrath (when I can be arsed) but I wanted to have a go with the old chipping methods that are described on the interwebs.

The main problem with this is that they require and airbrush according to every damn tutorial I have watched, which is many. I'm not a big fan of airbrushes, I find that they homogenise the painting style of people that use them and have quite a samey quality. That said if I had the spare money and space to use one for the very few things like this then I would get one. As it is, I cannot justify the cost nor do I have a safe space to use one.

With that in mind I wanted to try using AK interactive Heavy Chipping Fluid by painting the fluid on AND crucially, painting the layer of paint over the top of it. As you can see at the top I have a couple of example that I did on some spare bits lying around. 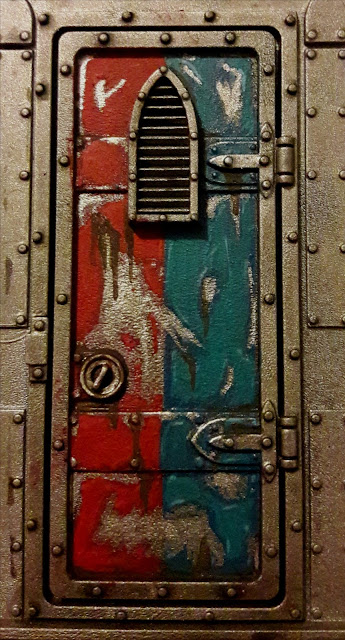 This door was sprayed leadbecher and washed with nuln oil before I sprayed it with matt varnish. After the varnish I applied the AK interactive. Then I painted one side khorne red and the other side thousand sons blue. After that dried I applied water over the top of the paint then waited for it to work its way through.

Then... I attacked! With a tootpick... I didn't have a spare toothbrush to hand as it was. After I had sated my paint rage I lacquered the door in dullcote, let it dry, and then painted all the additional layers and highlights on top.

You can paint on top of the AK interactive, but you have to have almost zero paint on the brush, otherwise it starts too remove the chipping fluid immediately. Patience is key and a virtue in this regard.

The chipping fluid itself tends to pool together, something about its viscosity and the varnish prevents it from being painted on in a seamless layer, so multiple applications were required. I think this issue would be absent when applying thinly from an airbush (le sigh). 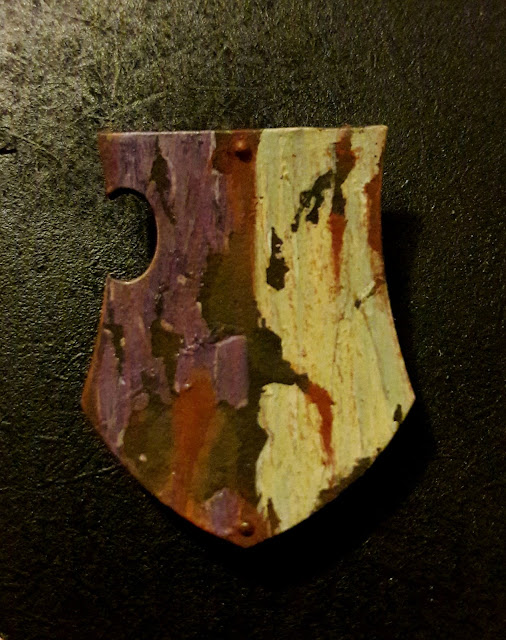 With the shield, I wanted to have a look at a rustier type of chipping/weathering. I primed the shield black and then painted browns and oranges on the shield, too conservatively I think as it was. I could have gone for brighter tones which would have saved additional work later on.

I also decided to see how it would work if I painted all the paint on apart from the final highlights before I started the chipping. So, after the varnish I applied the chipping fluid, let it dry, and then painted all of the purple and cream paints on top (with the same caveat of patience and little water).

I then chipped away after some water with a toothpick and sealed it with lacquer. After sealing I highlighted the chips and added traditional rust effect.

I'm happier with how the shield turned out to be honest, though I don't know if that's a factor of the colours or the rusted nature of it.

I think a certain amount of the effect is just ensuring you get the chips in the right places, which I don't think I did with the door. The shield has less of a problem with this as it looks like it would take a battering from all angles.

I'm happy that I can achieve this effect without an airbrush. BUT I am keen to try out hair spray instead of the AK interactive chipping fluid. I think this will give me a more consistent later over the under paint before I apply my top layers.

Honestly, the biggest issue I had was actually applying the chipping fluid. Whilst painting over it required patience and thought, it wasn't all that difficult in the end, just don't use water and apply very slowly and in thin coats. Patience!

Any thoughts would be greatly appreciated to distract me from my thesis and despair....