With wrath we come, for we are it sons, and by our hand you shall burn, 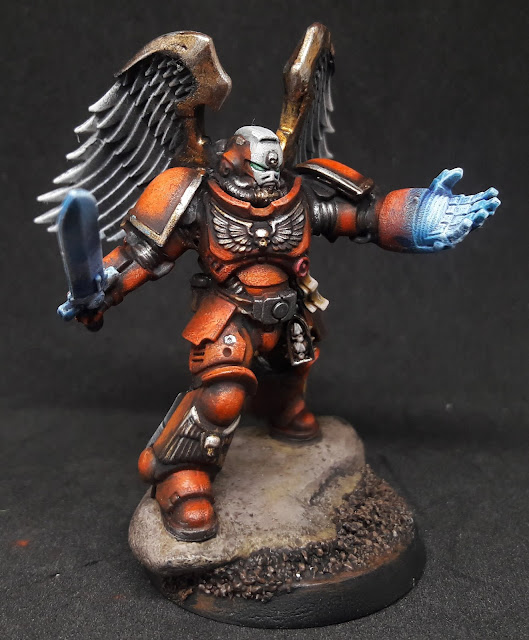 Hello and welcome to another day in the mess of my mind. In today's episode of mediocrity we are going to delve into the game I played vs Winters Seo's Admech. If you haven't watched the battle report then you catch it through this link here. Be warned, if you proceed too far down this post you will be subjected to spoilers.

To give people some space in case of accidental spoilers on long monitors I'm just going to recap the list that I played with. This list is just north of 1750 points as its all I had at a standard I was happy to put on the table to play with. 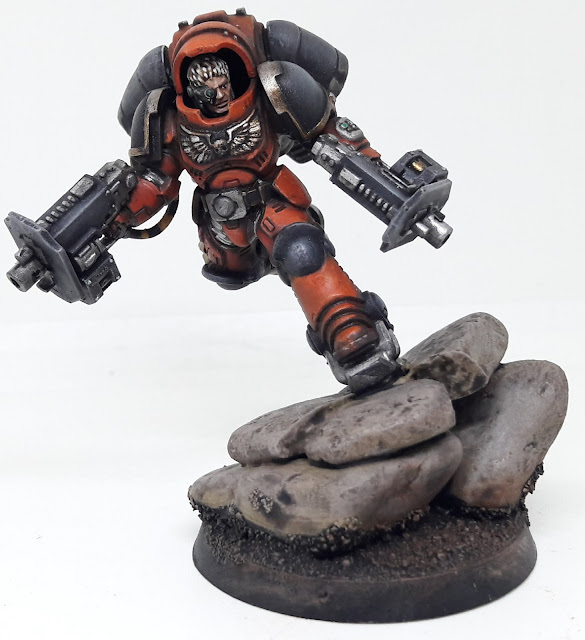 So, overall a relatively low body count and, overall, a relative lack of mobility. This army hinges on a critical alpha strike. The ability of both HQ's and the 12 Inceptors to sit off the board is crucial in directing a precision strike that wipes out key targets.

Obviously the Captain and Lieutenant provide their re-roll of 1s for wounding and hitting, vastly increasing the efficiency of damage output for the 72 shots that both squads of Inceptors can put out. This coupled with the additional -1AP on wound rolls of a 6 makes them incredibly efficient at rinsing squads at T5 or lower. The S5 of the assault bolters puts you in a middle spot where you will very rarely wound on 6s but equally very rarely will you wound on 2s.

We saw this go off perfectly in the game vs Winters' Admech wiping units out left right and centre. Additionally the mobility of Inceptors give you real flexibility in terms of object scoring, which did come into effect through the game. Finally, they also have the fly keyword, meaning they can effectively tie up weak combat units, like the dune crawlers, yet retain their shooting efficiency afterwards. 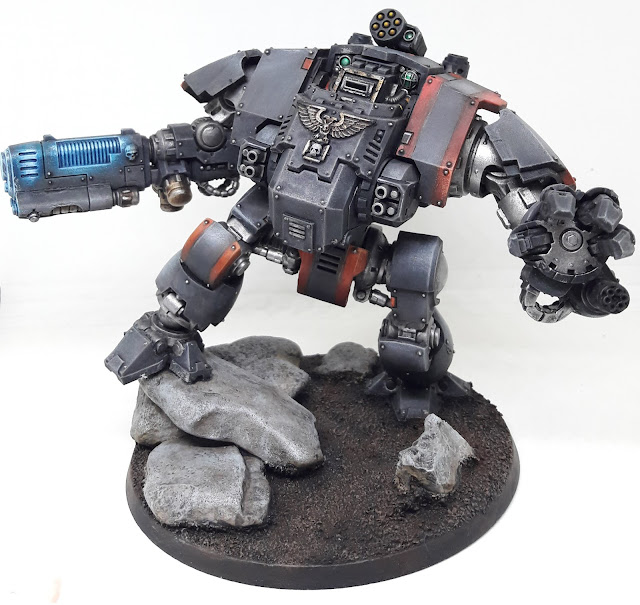 The Anvil - Redemptor and Hellblasters

With the Inceptors off the board, the fury of the opponents army will come down on the remaining elements turn 1, should I go second. This is the biggest weakness of the army, however this is somewhat mitigated by cover for all infantry units, coupled with the generally longer range weaponry of Primaris Marines. 30 inches allows you to sit 36 inches back, move up 6 inches and still touch the enemy units. Line of sight block terrain will aid in defence at this point.

The Redemptor dreadnoughts, if caught first turn by a well built army, will go boom and bye-bye. I would argue they are by far the weakest link in this army, suffering incredible vulnerability to dedicated anti-tank fire. Line of sight will mitigate this somewhat, but any -4AP weapons will burn straight through their armour, where infantry in cover would still retain a 6+ armour save.

That said, going first vs Winters allowed them to bring their prodigious firepower to bear. I personally think the heavy onslaught gatling cannon is a better choice for the main gun arm. However, in this particular army, the higher strength and AP of the plasma cannon makes up for the general lack of anti-tank weaponry on show. The Inceptors already excel at massed mid strength fire so it's pointless to double down with the Redemptors on that role.

The Fury of the Ancients Stratagem was one I employed every turn the Redemptors were alive to benefit from it, and that makes overcharging the plasma that much safer and more reliable. However D6 shots in 8th, for me, does not cut it in a competitive environment, and set shot numbers are much much better for planning strategy around. 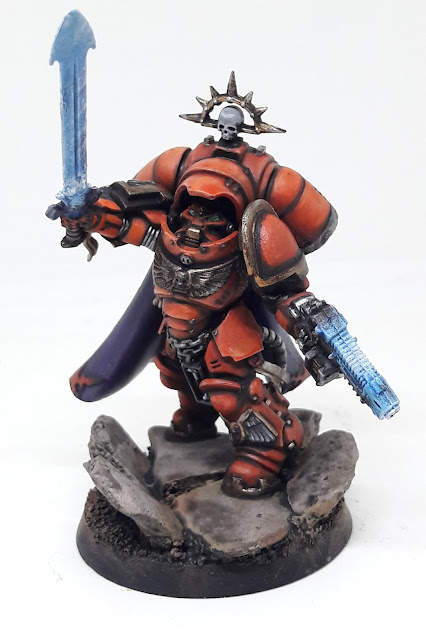 Winters and I actually discussed our lists beforehand, as we always do, in case balancing is required to make the game more fun. We actually discussed changing Winters' list to make it a little softer, as he was convinced that given first turn he would blow me off the board, and given 2nd turn I would't do enough damage.

Whilst confident in my army list, this was my first game proper with them and I wasn't sure how well they would perform. Obviously, they performed well, VERY well!! The constant in your face threat of the Inceptors performed as hoped, both in damage output as well distraction carnifex qualities. Allowing the rest of my force to slowly move up and lay down fire as it did so.

If I had wanted to crank out more pain, I should have used Bolter Drill on a squad of Inceptors too, but by the time I thought of that I had already done such a crippling blow I thought it would be a dick move...

Below is how the army will look next time I face Winters (coming soon) against The End of All Things - his Deathguard Army I have been painting. 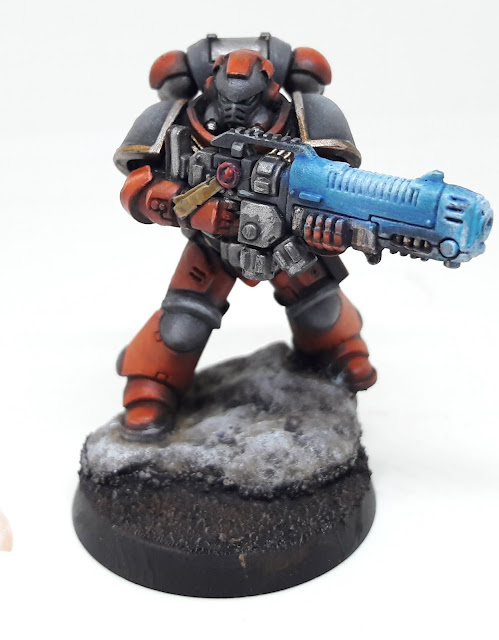 The squad of Plasma Exterminator Inceptors adds additional weight to the alpha strike, allowing me to pump 6D3 plasma shots into higher toughness or save units, overcharging with the re-roll 1s to hit coming from the Captain. The Primaris Ancient is more a function of points than strategy, but he will sit by the Hellblasters, allowing them to fire again on a 4+ when they perish.

I would describe this army as mid-tier competitive, by which I mean I think in a tournament setting it will win between 40-50% of its games. Closer to 40% though. Below are some thoughts on improving the army in a purely competitive sense, whilst still retaining a degree of the character of it.

Despite this being a predominantly Primaris army, to up the competitiveness of it, I would drop all the Intercessors and put in 5 units of 5 scouts. These would put out more fire at 24 inch range AND have 10 more bodies on the table. Primarily though, they are there for deployment shenanigans to prevent enemy deepstriking, bubble wrapping and screening the Redemptors and Hellblasters. This should also help claiming objectives in the early game.

I would drop the Ancient completely and take a regular marine Lieutenant barebones. This would allow me to take the Inceptors in an Outrider detachment, netting me an additional command point, AND provide the hellblasters with re-roll 1s to wound, which is more valuable than being able to fire 50% of the time when the hellblasters die.

I would probably drop the Redemptors if I wanted to go super super more competitive, but then that dilute the army to much from its original form and I like the miniatures too much! Not sure what I spend that 400+ points on though.... Perhaps a knight errant if I could squeeze some point out somewhere else...

So, I will ALWAYS run these as Imperial Fists, because that is my fluff and I won't compromise on that for competitive sake. However, if I were to build this list anew, purely with competitiveness in mind, then I would definitely take Ravenguard. It would allow that much more survivability for the units that start on the board, due to the -1 to hit.


And that is that for today!