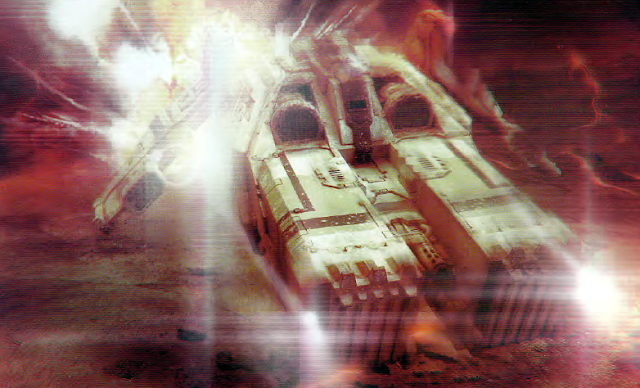 Ever wanted to ram a flying Tetris piece full of death into the enemy? Then perhaps you should consider the Caestus Assault Ram! For the record I pronounce it "k-aye-stuss" As that follows more rules of latin pronunciation than other alternatives I have heard. This bugs me for some reason despite it being utterly unimportant. Similarly I pronounce Cegorach as "Say-go-rack" for the same reasons.

Anyway... on with the review!

The ram has the following (impressive) profile:

It is also a flyer with the hover mode option AND it is also a tank and a transport. The tank rule allows it to ram despite being a flyer. Pretty nifty eh! The transport capacity is explained under a special rule Misericord as explained in the next section.

Overview - Excellent start to the unit, but its needs something juicy to really justify that 305 points base cost.

The Ram comes with four special rules. Two of which are assault vehicle (well duh) and also deep strike, though given the size of this thing, unless you are on an apocalypse board you best be very brave to do that! The other rules are as below:

Misericord - This defines the transport capacity of the Ram as 10 models, restricted due to the compensating mechanisms in the reinforced hull for the shock of collision. The Ram may only transport models in power armour, artificer armour AND terminator armour. Terminators DO NOT count as bulky in this vehicle. So you can take the full 10.

Caestus Ram - When conducting a ram attack you can roll two dice and pick the highest for determining if it was a penetrating hit or not AND you can add +1 to the roll on the damage table. Thus being able to explode things with a ram! If that was not enough, you also have a 5++ against damage on the front armour of the Ram including against any damage inflicted due to being rammed or ramming yourself. Tasty.

Overview - The ability to take a full terminator compliment, a 5++ save on the front AND major bonuses to ram damage make this a beast to be feared before you add any weaponry to it.

The Ram comes with some decent weaponry and standard gear:

This will kill most anything infantry you pop it on if it hits, unless they have a decent invulnerable. Not so handy at destroying resilient vehicles due to armoured ceramite, but will take medium vehicles and building down with aplomb.

A nice and accurate horde clearing weapon doubled up so you can machine spirit the Magna Melta at the target ahead.

Armoured Ceramite - Immune to melta as many vehicles are in 30k!

Machine Spirit - Oddly listed under wargear rather than rules, but allows you to multi target and that is ALWAYS good.

Extra armour - more armour than you started with. Thus extra.

Not a great deal of options here. Frag Assault launchers are pretty much a must have for obvious reasons. An auxiliary drive is nice, but at the cost you have already and considering the durability of the Ram I would decline to take it.

Finally you can also swap out the Havoc launchers for Missile Launchers with frag and krak grenades. Yes this gives you access to S8 AP3 shots, but I don't think it is worth the swap compared to wound saturation with the twin linked havocs personally. 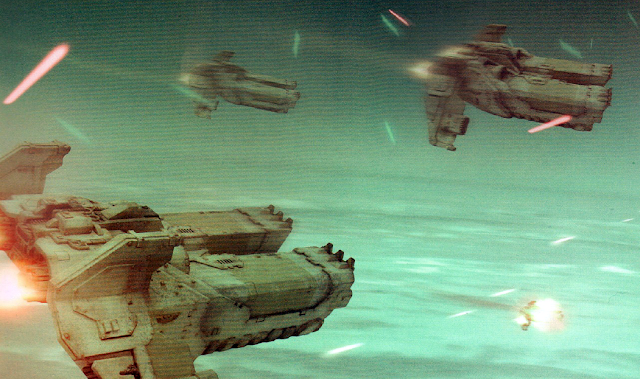 With the assault launchers you are looking at 315 points for the Caestus assault Ram PLUS whatever you put inside is likely to equal or exceed that cost, so you have up to 750 points in one blob in reserve... This predicates the Ram for proper sized 30k games, by which I mean 2500+ points. Otherwise it is a little too much - eggs in one basket as an approach.

Similarly I would try to build in some reserve shenanigans to your list, e.g. a Damocles command rhino, to give you extra power to bring on the Ram exactly when it is needed. Skyfiring aspects of the enemy become priority one to take out for your ground troops on turn one.

The Ram works excellent well when you have designed a truly complimenting force around it. Unless you are playing super high points levels then this will invariably become a focus point of your army, even with tactical marines in its still potent and still pushing towards 450 points and that is wasted on the tacticals in my opinion.

If you aren't going to assault from an assault vehicle I don't see why you would take it. But releasing a 10 strong unit of red butchers from it? Thats just murder...

If you take the Ram I think you should go big with it, build ground forces that can take out flyers well and aid you in getting the ram on, additionally try not to skimp on bodies too much so you can present big psychological threats to your opponent with the threat if the Ram coming in from reserve,

Overall - I think at 30k points level this is a very competitive unit, but it does almost drag the focus of your army to it, so if you want one just to fit it in here and there I'd say leave it alone. Unless you just want to buy and paint one to have fun obviously! Winning isn't everything by a long shot.