The Burning Horizon - The Crimson Octio 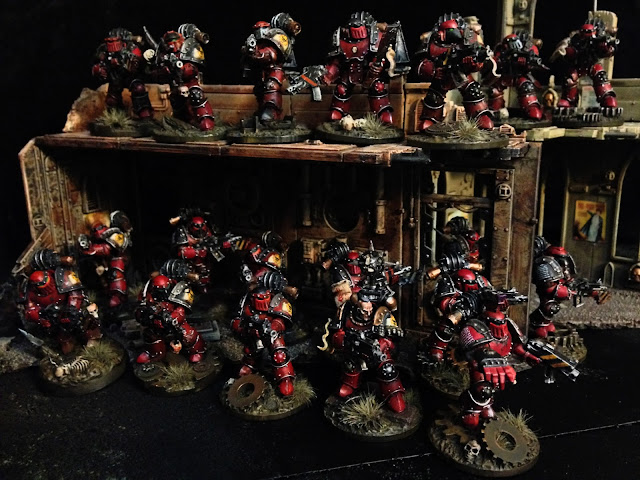 It was a long march back to the drop site, made all the longer by the absence of Octio’s Rhino and Land Raider transports. Forty leagues south from here the loyalist auxilia had exacted a heavy toll on The Horizon’s armour. Now those same auxilia were nothing but frozen corpses, their bravery already forgotten, merely another bloody stain on the altar of the Ruinstorm.

Hail stones the size of heavy caliber shell casings clattered unceasingly into the column of marching astartes. Whether it was the destruction of the planet’s geothermal sites or the futile detonation of atomics by the desperate loyalist garrison, Jeho knew not, yet the weather of this once temperate world had altered significantly. 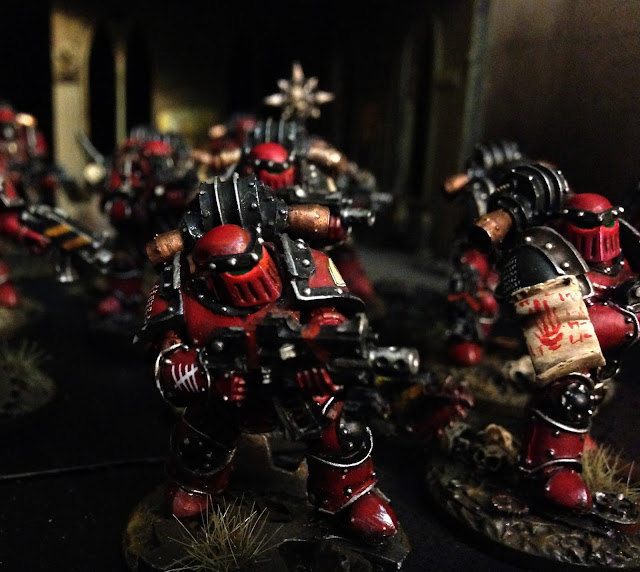 In a matter of hours, the temperature had dropped violently and visibility was virtually zero. A hail stone had already cracked Jeho’s visor, exacerbating the already dire state of his vision sending shimmering static across his tac display. His patience was being sorely tested this day.

Flexing armoured fingers to ward off freezing servos, Jeho muttered a prayer to the great annihilator, a solemn psalm of esoteric verse that gave thanks for the victories bestowed upon The Burning Horizon that day. He reminded himself that this storm was but an inconvenience, a respite for the surviving loyalists of this world in which to ponder their ultimate ends. 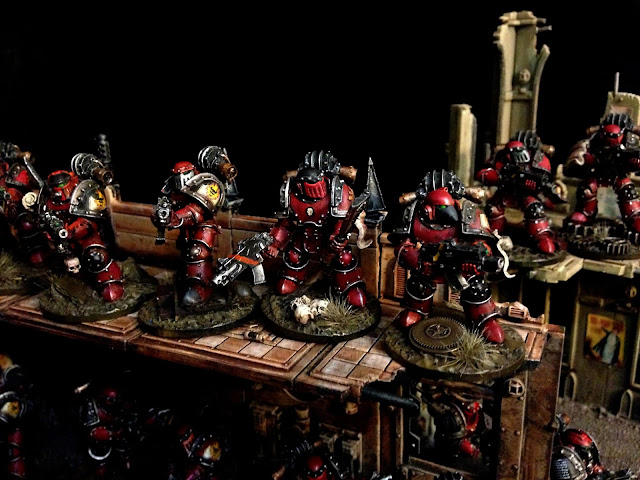 Jeho would be glad to return to the drop site, there he would make offerings and attend a dark communion with his surviving brothers. Soon after, the Octio would sally forth with the rest of the reinforced Horizon and crush the life out of whatever resistance was left out there.

Jeho smiled. Yes, there was much to reflect upon and be thankful for. Perhaps even time for a little silence, contemplation and study too.

Then he noticed Mordecai. 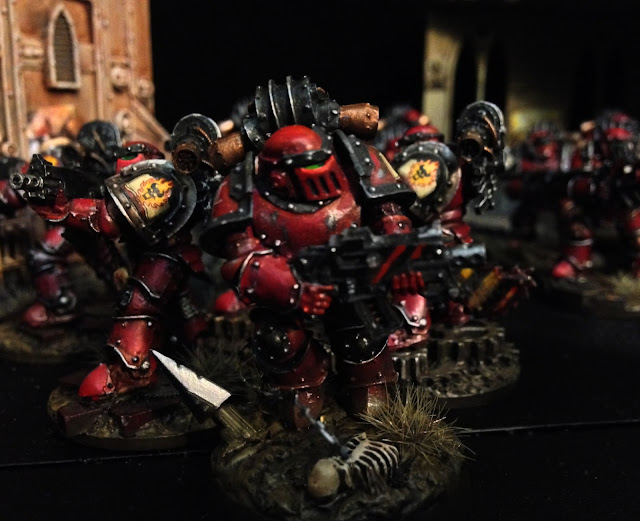 Battle disciple Mordecai had been trudging forward for hours much like the rest of the Octio, his backpack generator rising and falling with each deliberate tread. Now the legionnaire’s step faltered in a curious fashion that made Jeho’s gums itch and the muscles in his shoulders tense.

Something was wrong. Mordecai’s crimson armour was… was it quivering? Jeho thought fleetingly of the armour-flesh of the Serrated Suns, those amongst the legion who had bonded with the beyond itself to become Gal Vorbak. No, this was somehow different. 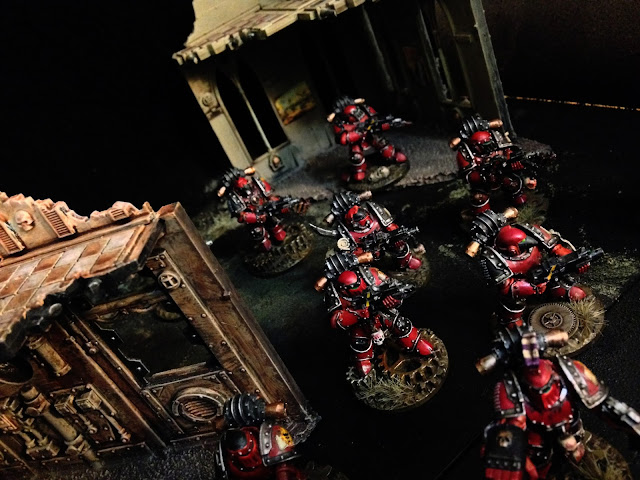 Jeho tried to speak, to warn Mordecai, but his tongue had become too leaden to form words. Stranger still, now Mordecai’s armour seemed to be shifting, wrestling with an invisible force. Violently it began to twist grotesquely, popping rivets and scoring rivers of fractures across the ceramite. Jeho recognised the signs too late.

With a concussive crack Mordecai died. A hideous lump of ceramite and astarte suddenly fused in front of Jeho, held suspended above where brother Mordecai had stood a heartbeat before.
The field broke, dropping the remains of Mordecai in an ignominious crash of gore and plate. The shock wave of equalisation butted Jeho to his knees as a flatline screamed his brother’s departure from this world. The vox clicked open as Jeho snapped off a quick burst from his bolter into the whiteout. 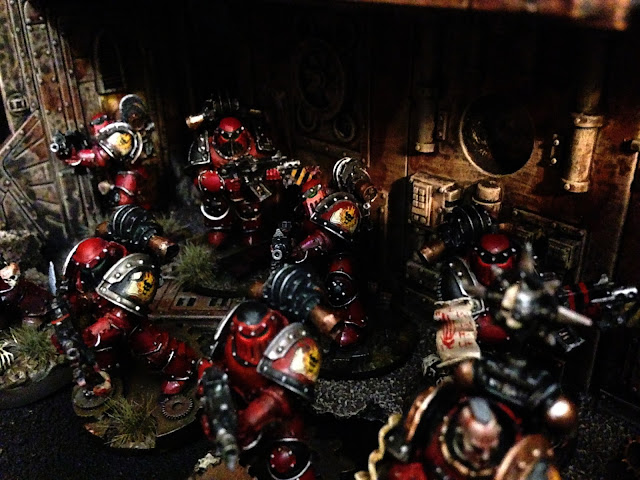 ’Craven whoreson bastards, we are ambushed!’ Reth'nol was at Jeho’s side, bolter braced tightly against a studded pauldron firing blind bursts at intervals.

‘Targets Reth’nol,’ voxed Jeho, blinking through several filters on the infra visor to no avail, ‘tell me where the bastards are lurking?’ 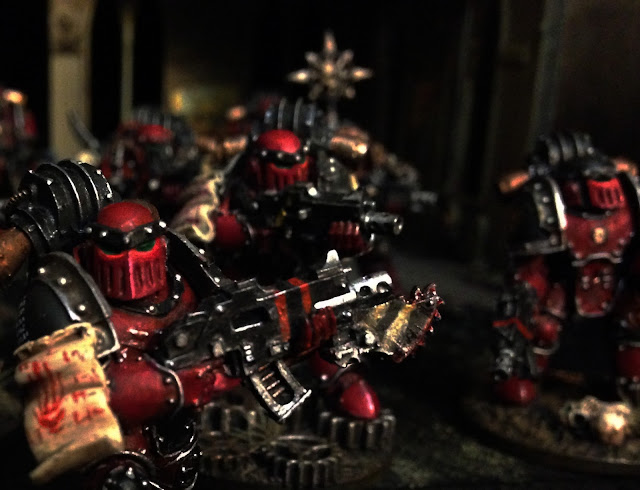 ‘Xiacto, Auspex?’ Reth’nol swept the white out with fire, the recoil hammering against his vambrace.

‘Nothing. Not a damn thing, it must be the atmospherics or- ’

Incoming bolt rounds whined overhead and detonated amongst them. A shot smacked hard into Jeho’s grieve, staggering him in a shower of shattered ceramite. Combat stims flooded Jeho's bloodstream, stifling the trauma even as another flatline screech told him that Xiacto had been less fortunate. Spitting a curse, Jeho righted himself and resumed firing bolts into the storm. There was only one course open to him now. 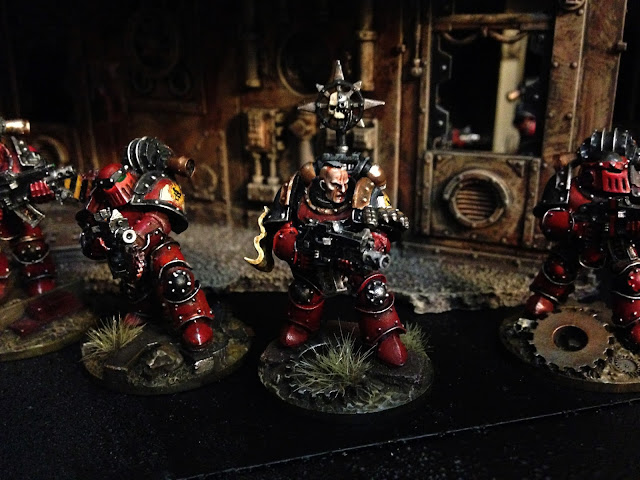 ‘Octio, divide! Su’tal, push up and find these scum.’ Already the squad was on the move. ’Reth’nol!’  Jeho flinched as a bolt glanced his helm, ‘You’re with me!’

I hope you enjoyed this second instalment of Ed's Burning Horizon, both in background and beauty.

Email ThisBlogThis!Share to TwitterShare to FacebookShare to Pinterest
Labels: The Burning Horizon