Today I'm going to have a quick run through the builds that I will be playing Death Company with and discuss the tactics that I would utilise with these builds along with their respective strengths and weaknesses. I'm not going to profess that I am an expert on any of this subject matter so if you disagree with something I say, please do comment below with your opinion as its always good to see how someone uses a unit differently (just try not to state your opinion as fact if you don't mind!). 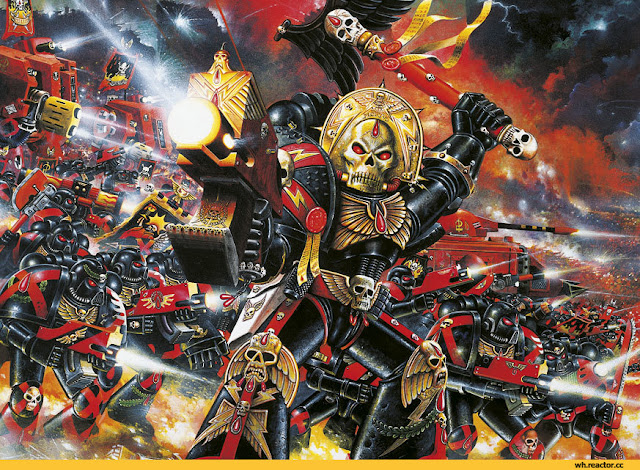 So the list I am about to describe is more of a "fun" army build that utilises unique aspects of the Blood Angels with a focus on the Death company and their ability to be inherently tooled up ba***rds of destruction.

Firstly, I will be using the Baal Strike Force detachment in the Blood Angels codex. This is because marines are the most common army to encounter out there, so with all things being equal (such as weapon skill and strength without any special weapons) that additional point of initiative (providing you didn't perform a disordered charge) means you will strike first over almost all other marines and at the same time as almost all Eldar. This means that you will be facing less attacks back from marines and that you will actually get your chance to hit the wily xenos scum before dying. Obviously any I1 weapon like thunder hammers ignore this benefit.

So in this 1850 point list I will be taking the following:

Elite - Lemartes, Guardian of the Lost

Now obviously this has 2 very expensive units that are the heart of the army and they will make or break any game you play, it also focuses on these units being led by the buffering Astorath and Lemartes, but I will discuss that later in the tactics section.

So this army relies heavily on two things. The first of which is the two large death company squads surviving, both to get into contact with the enemy, but also that anything swinging before initiative step 1 doesn't kill of those thunder hammers and power fists first and secondly the storm raven turning up in a timely fashion of sorts.

The Death Company squads have fire power to thin out cover camping squads (albeit at strength 3 but there are 4 of them which makes up for it) and take on 2+ armour save (if within 6 inches) and obviously you need to direct these to their targets as appropriate with the infernus pistols going for either mech or terminator equivalents. The flamer squad can still deal with 2+ saves and mech thanks to the thunder hammers and power fists but softening something up with shooting is always a big bonus. Hug cover and get in the enemies face as fast as possible, these guys belong in combat not being shot at.

Raphen's death company are designed to hide and claim objectives, they are too small to be a threat and will die very easily to sustained fire power, so keep hidden and score points is the name of the game.

Cassor the damned can run in the Storm raven, he is an absolutely superb mulcher of elite units for 2 fantastic reasons. Firstly he can put out 6 attacks on the charge (3 base + 1 for 2 x CCW and +2 for rage) and these will instant death anything that is T5 or lower because they are S10 (maxes out at 10) or S13 on the charge with furious charge EDITED following Westriders points in comments :). So multi wound models will fall beneath his wrath leaving only invulnerable saves to keep them alive. Secondly, he is a character. This allows him to challenge anything initiative 4 and strike at the same time, or anything initiative 5 on the charge because of the detachment. He is a character slayer and can bag you vital points or kills because of it.

The Baal predator is used to manoeuvre the enemy around to avoid its flamer templates and thus aid in the Death Company squads getting into combat as they are hugging cover and closing as rapidly as they can.

Finally we can consider the benefit of Astorath and Lemartes. Both of these guys have zealot, so you will be re-rolling all failed to hit rolls in the first round of combat. This is huge with death company and will allow you to deal out a huge amount of hits immediately. Astorath also has Liturgies of Blood which allows the unit to re-roll failed to wound rolls in the first round of combat. Whichever squad you decide to place him with, they will murder everything. Astorath hits at I1 but will instant death anyone not eternal warrior on a to wound of a 6, but he only has a 4+ invulnerable so is susceptible to instant death himself. Lemartes is a great horde thinner with his +2 strength AP 4 6 attacks on the charge. 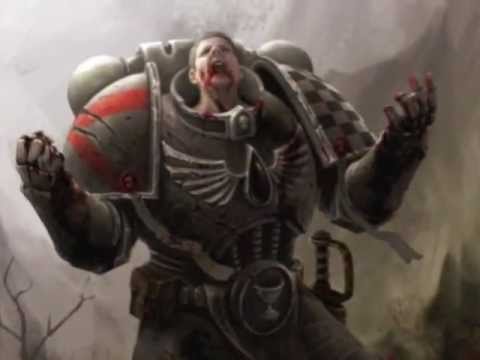 So this list has an actual "competitive" focus about it, though I frame the word in quotation marks as the events I attend are, in general, fairly heavily comped and so not really a measure of true competitive meta as they actively encourage a more friendly environment that doesn't ban Win At All Cost (WAAC) lists but certainly limits and frowns upon them.

That being said this 1850 force can deliver a lot of nastiness itself if played well. It also relies on the Baal Strike Force Detachment though this takes advantage not only of the extra point of initiative but also the extra elite slot that it grants allowing you to really max out on the Death Company goods.

So as you can see, a much more balanced build that repeats the same squad build 4 times (with the exception of one infernus pistol) incorporating both duality and redundancy across the army. The one big glaring omission in this list is any ground to air or air to air attacking capability, but this is a deliberate choice and has thus been equipped appropriately as I will discuss below.

This army does away with any mechanised vehicles beyond the drop pod and relies entirely on multiple threats with jump packs moving up the board as fast as possible to engage the enemy.

The captain is quite expensive but comes with a few handy trinkets. The most important of these is the Veritas Vitae that allows you generate an additional warlord trait from the strategic table. So you can have two from that table if you wish or chance your luck on two different tables. A good roll can be a game winner. He also has Valour's Edge, an at strength and at initiative AP2 power sword, however this is strength 5 and initiative 6 on the charge in this detachment so it can be very good. The shield is for survival and the melta bomb allows him to tackle armour as well.

The Death Company Squads are tool kits. Ignores cover templates? Check. Melta gun? Check. AP2 weaponry at x2 strength for 2+ saves and armour? Check. Power sword for at initiative AP3? Check. 7 other guys pumping out 35 attacks on the charge at strength 5 PLUS the possibility of hammer of wrath attacks? Mother flipping check all over that.

Four of these squads ensures that either you will lose a few from all or maybe one whole squad. Remember these guys have Feel No Pain so they can shrug off a lot of Strength 7 or lower shots a third of the time enhancing their survivability. Utilise the cover and punch everything to death.

Raphen's Death Company have exactly the same role as described above.

Cassor the Damned now comes in a drop pod on the first turn, he is designed to be an angry distraction in the backfield, maybe score an objective first turn BUT also don't forget he has a meltagun (12 inch range so 6 inch for melta) and so can help take out some armour in the enemies back line as well.

As mentioned in the build section, this army lacks any anti-flier capability unless they are in hover mode. But the point of this army is to be engaged in combat thus preventing them being shot at. These guys have a 12 inch move and up to a 6 inch run on the first turn and if the enemy has moved towards you or has been forced to as they need to claim maelstrom objectives then a turn 2 charge (or if you're lucky a turn one charge if you went second) is very much achievable.

Null deployed armies like a Nemesis Strike force will hurt this army but then you should be facing off against an equally elite army so it balances itself somewhat as long as you take down the Dreadknights early on.

Anyway, well done if you have made it through the wall of text to get to this point! I do appreciate anyone reading all the way through my drivel on tactics in a game that I play narratively more often than not but I do attend tournaments on an at least once yearly schedule and don't do to badly at them (that's a lie!).

I would love to hear anyone else's experience of using Death Company heavy lists or just shared tactics for relatively small elite armies as well, I love to swap and debate ideas, just be friendly about it (partly because I can be very slow sometimes...).

Let me know if you enjoyed this article and if there are any other tactics either as part of my armies (past and present or even future) or just general theory hammer tactics that you would like to see.

Thanks as always and