Today I'm going to keep up my return to Legiones Astartes review and cover the Legion Whirlwind Scorpius. The Scorpius armament was an experimental design going through field testing at the outbreak of the Age of Darkness which limited its procession to a full production run and I think all enemies of the Imperium are somewhat glad for that fact!

The Scorpius sits on a nice rigid frame of 13:12:10 armour with a BS4 and 3 hull points. So much so standard to be perfectly honest. In terms of cost it comes in at 3 melta bombs over the 100 and if you take all its upgrades which are not numerous then you will hit the lofty heights of 140 points. So it is never going to cost the earth to fit this into your army. Unlike Whirlwinds in 40k, you cannot take these in squadrons (or at least in my Crusade Book you can’t I don’t know if this has been updated in subsequent books).

Overall not much to say here so we’ll just crack on with the equipment this little bugger packs. 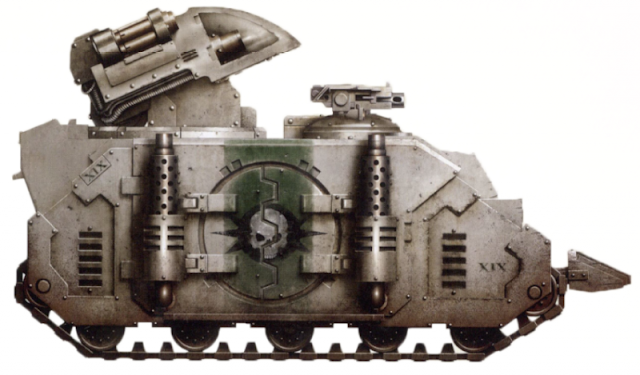 The Scorpius comes with (unsurprisingly) the Scorpius Multi-launcher. This weapons has the following profile:

The Rocket Barrage special rule means that any turn that the Whirlwind Scorpius remains stationary then the Scorpius Multi-launcher can fire with a Heavy 1+D3 profile. Meaning that you will potentially drops up to 4 small templates down on the enemy! Very nice.

As standard the Scorpius comes with a searchlight and smoke launcher as well as twin-linked bolter. In terms of additional equipment the Scorpius can also take a hunter killer missile, a dozer blade and extra armour. Of these the only one really worth taking is the extra armour, with ignoring a shaken result ensuring you can still fire your main weapon.

Overall the Scorpius is a pretty stripped down machine compared to other options that the Legiones Astartes have with only 3 additional options that are themselves nothing exciting! But with its main weapon and low cost that really isn’t an issue. 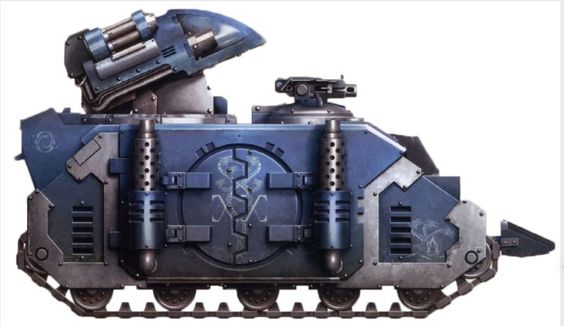 The main principle with the Scorpius is that you want it to fire often and many. This principle require you to move the vehicle as little as possible so deployment of the Scorpius is arguably the most important decision you will make. I would personally keep it centre forward as much as possible to make the best of its 48” range.

Sitting too far back will be unlikely to keep you out of range of any army but units that are more vulnerable to the S8 AP3 barrage may be able to skirt its attacks.
Line of sight is always helpful with blast weapons but ultimately with the potential to fire indirectly with 4 small blasts it isn't too vital, particularly if you have relatively large targets (area wise) to engage.

However, I have personally faced this beast a couple of times now when playing practise games with my mechanicum, and this was a perfect illustration of how it can be lacklustre in its performance. With such small squad sizes as I have with 3 being the largest, the small blast really struggled to hit with even any kind of scatter. And the bigger targets in my army such as the Thanatar have a 2+ save to compensate.

Overall given its cheap cost and potential for damage against 3+ saves squads AND the strength to wreck low level transports like rhino’s, the weakness of suffering against small elite armies is not one I would consider too much. Against most armies the Scorpius is likely to pay dividends for a tiny investment points wise!

Addendum: I am aware that you can buy an upgrade for the Scorpius that grants it the ignores cover special rule, I’m not exactly sure which rules supplement this comes from so if anyone could lay that out in the comments I will copy paste your info into the post.

EDIT: Regarding the Ignores Cover, that is a Legacy of Glory from Imperial Armour Volume Two - Second Edition.
It's the Battle of Keylek upgrade for 35 points or 75 points for Super-Heavys. All the blast weapons of a vehicle gain Ignores cover.

As far as I am aware it is something that isn’t necessarily allowd as an upgrade in all comp’d tournaments, but if you have the option to take it and the cost is not exorbitant than it would make the Scorpius an even tastier prospect.