Deathwatch Marines as 30k BlackShields - A side Project 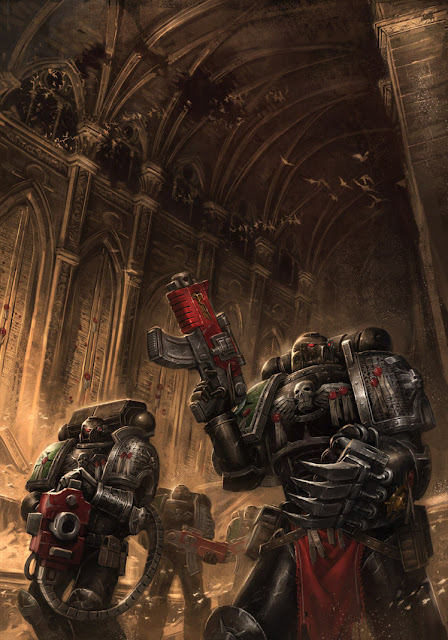 I just thought I'd touch upon a new side project (to add to my many) that I'm going to be starting in the coming month. This is to make a Deathwatch themed force but make use of actual rules so that I can play them in games without using the characters from the box set.

This stemmed from the boxset rekindling my love of the Deathwatch look. Though I have to say the models in the game are far to chapter unique for me. I have always envisaged the Deathwatch as removing every notable mark of your chapter from you on induction apart from the chapter emblem on your right shoulder. Whereas the board games miniatures are all very identifiable as their own chapters. They look great but not Deathwatch enough for me!

Anyway I impulse bought one of the metal Deathwatch upgrade kits and have been pondering what to do with it. I've now decided to make a small Black Shields force from Horus Heresy Retribution book. For those that don't know the Blackshields were Astartes during the Horus Heresy that rebelled against their legion, either through disgust, such as traitor legon marines that remained loyal, but also just astartes that hated both sides equally with disdain for how they sunk to great lows to win.

This will only be 11 models with 2 basic troops and a HQ but I want to put lots of effort into making them look very cool with a tonne of special weapons! The fluff for these guys is that they were from traitor legions and they turned black shield to defend humanity. Following on from the horus heresy they were stripped of all previous heraldry and inducted into the deathwatch for life. These 11 are the only few who have remained, hidden from the imperium, with no record of their existence known except by the highest level of the inqusition.

They exists only to serve and to die.

Anyway, just thought I'd let you on in the whirring and clicking of the cogs in my mind :)