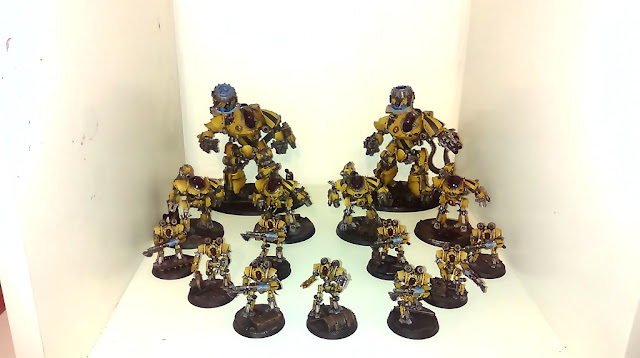 So the weekend just gone I took my mechanicum force (pictured above without the HQ as the pic quality is better) to my local clubs tournament called Vanquish! Its a 1750 point tournament that is always comp'd. This year that comp was to restrict you to a CAD only OR a codex specific detachment (e.g. realspace raiders for dark eldar). So no formations, plus not LoW or Super Heavies. I have to say I loved this format, as you were still allowed many many forgeworld goodies so the variety was still super high, but I found games were easier with less rules to remember essentially!

Anyway, with my best intentions I only captured pictures of my first game, but I will run through my other 3 fairly quickly. Sadly I only played 4 out of my 5 games as I was really unwell on day 2 and had to leave early to lie down. The fact I turned up was only because I fancied my chances in the painting competition! Otherwise I would have just stayed at home I was so nurgle infested...

Game 1 was against a tremendously nice guy, who I think won most sporting opponent which doesn't surprise me! He was called Paul and he had a beautiful army!!! It was speed freaks and unfortunately for him I got first turn and being Dawn of War everything was in range and I popped most of his transports first turn... but we had a great game, but maximum points for me, first time I've ever achieved that at this tournament! Have a look through the pictures below and you'll see how pretty his orks are! The red is lovely. 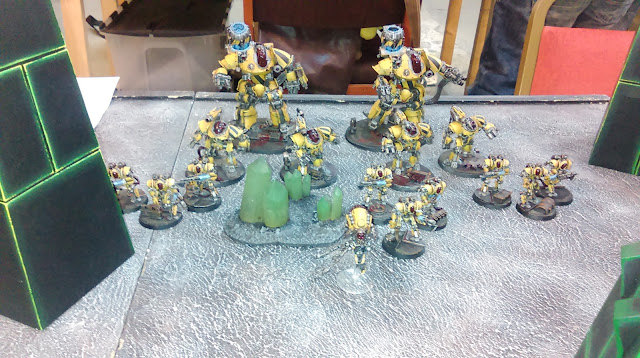 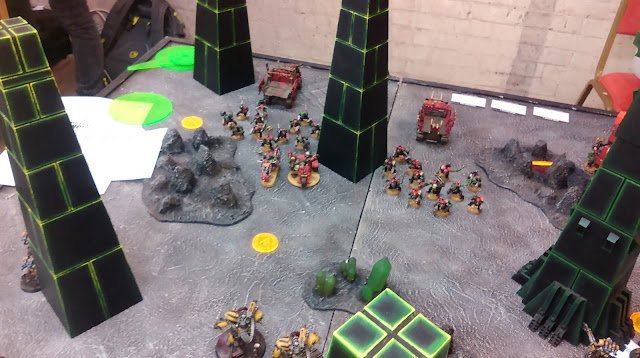 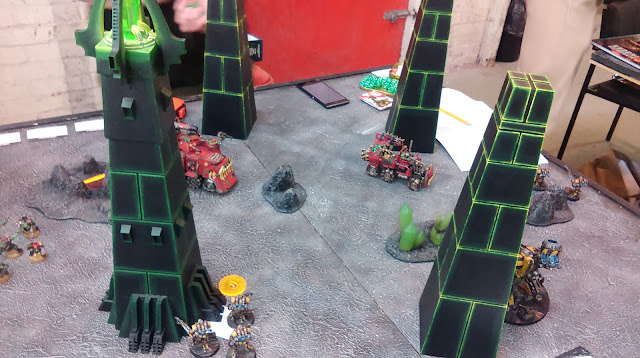 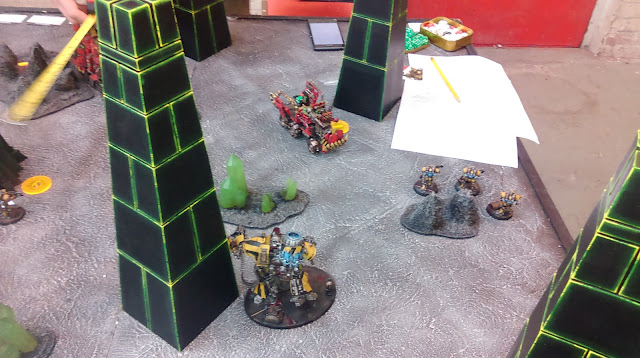 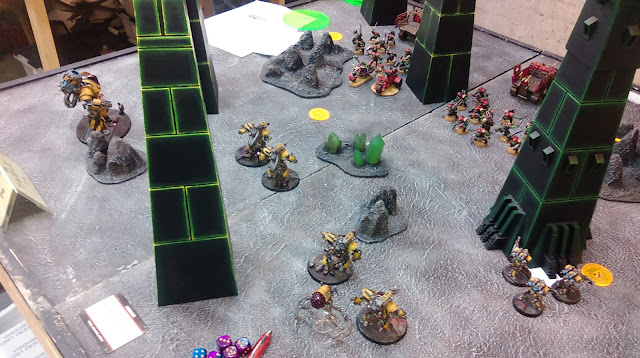 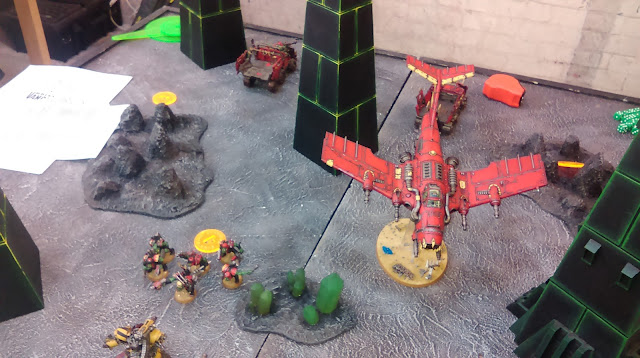 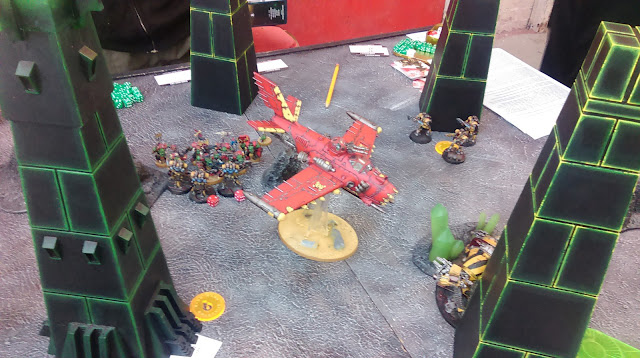 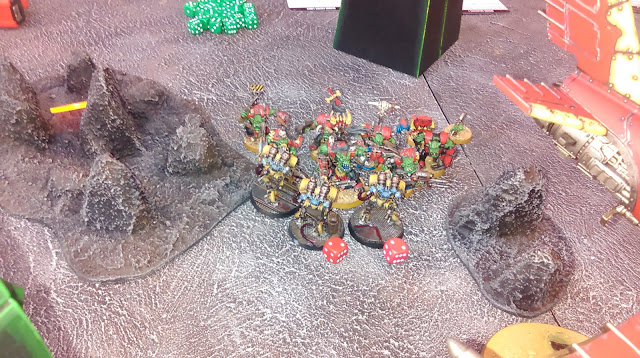 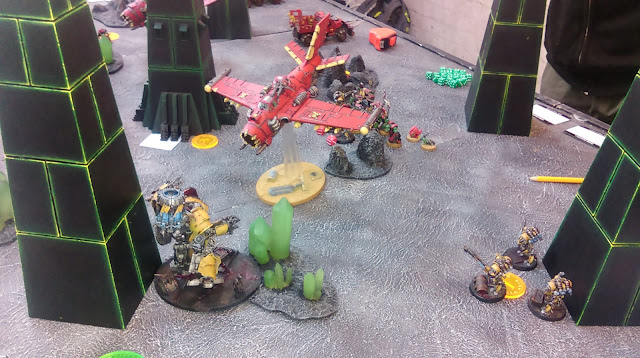 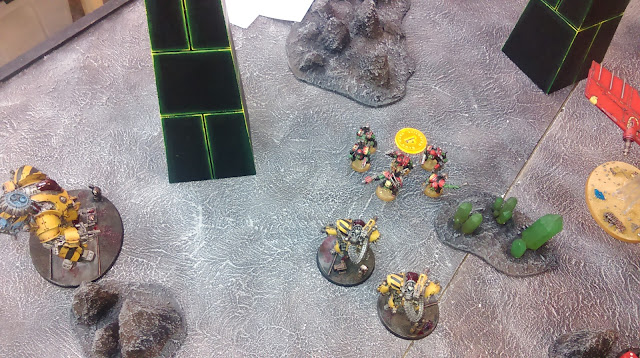 So despite a maelstrom game as an opener, I was off to a strong start.. But with Suiss pairing that meant a hard second game and so it proved to be...

Game 2 was up against a chap called Ross who was one of the first people I met at my local club a couple of years ago. A thoroughly nice bloke who is a very good player. He brought White Scars and we were both nervous about facing each others armies, with what seemed like a good counter for each others build oddly!

In brief Ross had several squads of bikes with grav guns, a sicaran, a thunderfire, a storm talon, a squad of multi melta bikes, a chapter master with shield eternal and some scouts as I recall. I did manage to make a bike squad run away turn 1 off the board, but Ross in turn took down a thanatar with some excellent rending scout sniper rifles!

Unfortunately for me the dice turned on me (failing 3/5 3++ for my warlord while Ross' chapter master tanked nearly 20 in a row!) coupled with some excellent tactical play from Ross. It was  a very blood affair with only about 500-600 points of our armies combined left on the table, but a maximum points win for Ross! Back to my usual territory!

Game 3 and the last game of day 1! I faced a Tau list that was new to the owner and not terribly optimised. Charles was his name and he had horrendous luck! He managed to take his riptide down to half wounds for me with gets hot rolls!

Top of my head, he head farsight with a fusion crisis team, another crisis team (all deep striking), a riptide, a sky ray, a hammer head with rail gun, long strike with the stubby looking gun, fire warriors in a devil fish and a squad of infiltrating kroot.

Charles got second turn and when his crisis teams came down the dice were not with him. Farsight scattered to sit on his table edge and after taking a pummeling from my battle automata he rolled an 11 on his leadership and they ran from the board. I felt awful for him! Of all the crisis suits and drones that arrived on his turn 2 only 1 suit with 1 wound was left after my turn 3...

Charles couldn't build steam from that unlucky run of rolling (seriously he rolled so many 1s!) and I took another maximum win. So 2-1 on Day 1 with a good haul of tournament points!

Game 4 and day 2. I had been very sick at work that morning and looked like death as many people remarked. My opponent had an excellent Ork army that was beautiful and I regret not taking pictures of it. I can't remember a great deal of this game, except that an ork Warboss had a relic with instant death on a to wound roll of a 6 that polished off a thanatar! It was quite a tight game until I had 1 very bad round of shooting and he took it from there. Thoroughly nice bloke whos name escapes me sadly.

I felt terrible that I couldn't give him my full concentration but he was every inch the gentleman about it.

So Game 5 I forfeited and left after lunch before it began. but during lunch the armies selected by the judges for the painting competition were laid out and all players could vote. Out of a field of 60 I was selected along with 9 others for voting.

To just get to this point I was incredibly chuffed! The standard of armies is always high at Vanquish and this was no exception. I managed to snap some pictures of most of the nominees as you can see below: 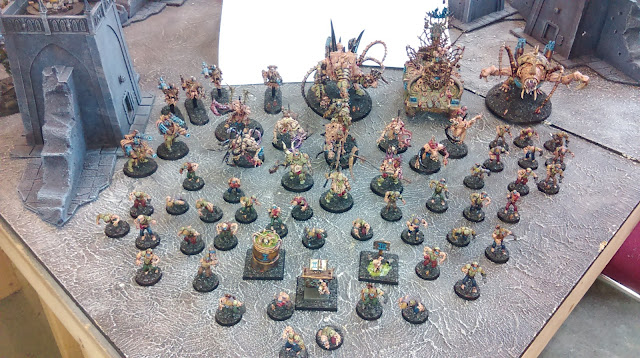 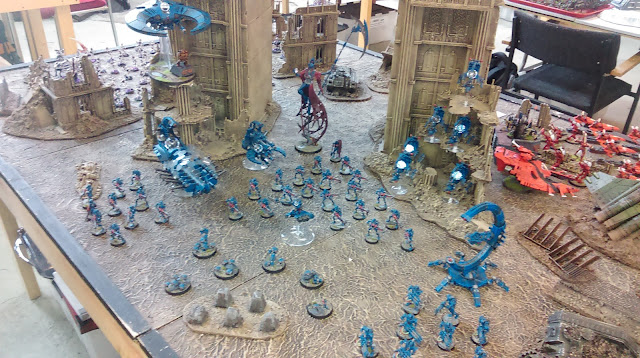 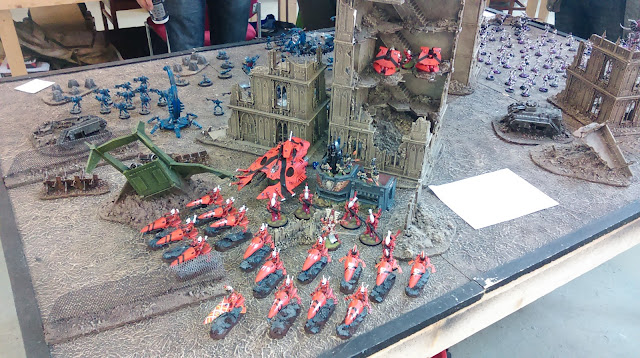 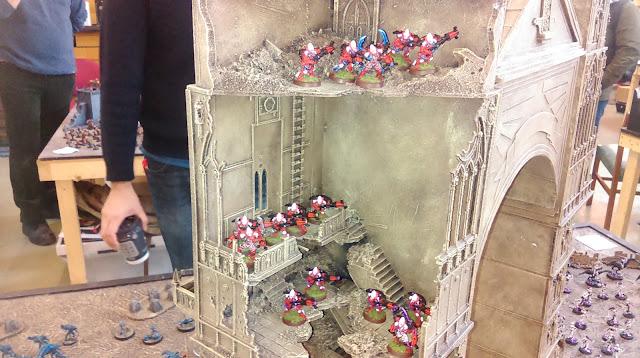 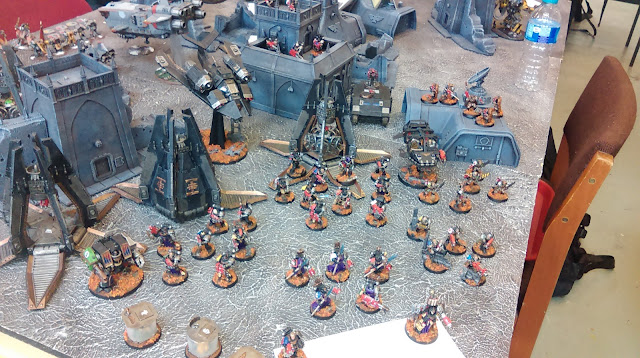 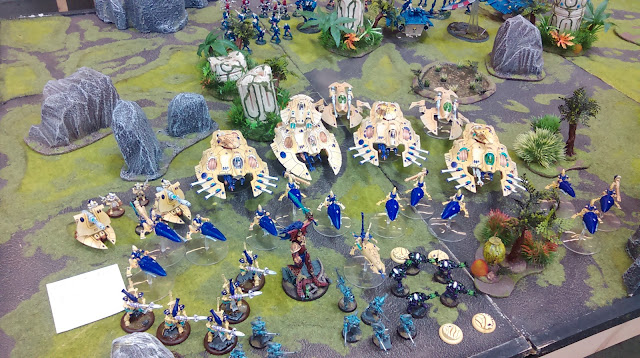 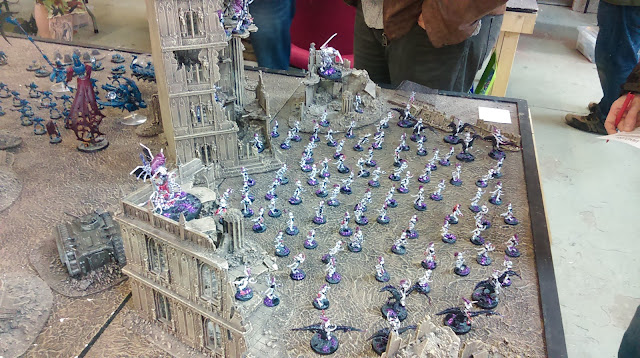 Crowds stopped me getting to the others but there were another Eldar army and a beautiful space wolves army as well.

The eventual winner was the stunning Nurgle army that also took best painted at Vae Victus the 750 point tournament I attended in february. Here as then he got my vote and his brothers deathwatch got my second vote as they were beautifully converted!

BUT! I came second!!! Joint with someone else but as I left I'm not sure who. Apparently we had the same primary and secondary votes and we were only 5 votes behind first. One of my To-Do aims on my 40k Addict list was come top 3 in a painting competition which I thought very unlikely. But I am chuffed to bits to have achieved it!! I really am!

Got to say this was my best performance tournament wise as well. I think I garnered 32 tournament points this year compared to 22 the year before. I don't know where this placed me, but definitely higher than last year! I look forward to seeing my ranking as if I come in the top half with a game handicap essentially I will be very happy indeed!

To round this off I will just once again say, as I did last year, that we at Bristol Vanguard are damn spoilt for table quality. The terrain and the organisers who help make and store it are just sublime. here's a few pretty pics of tables before game 1 started to have a look at :) 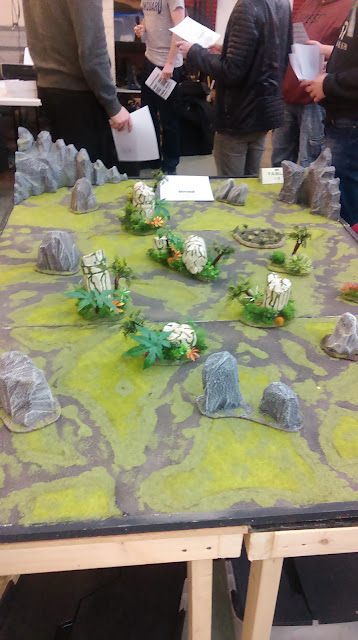 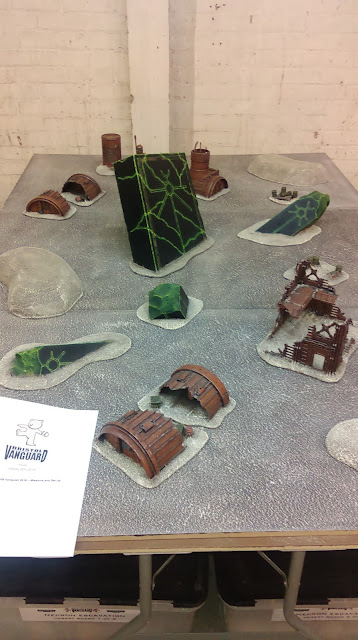 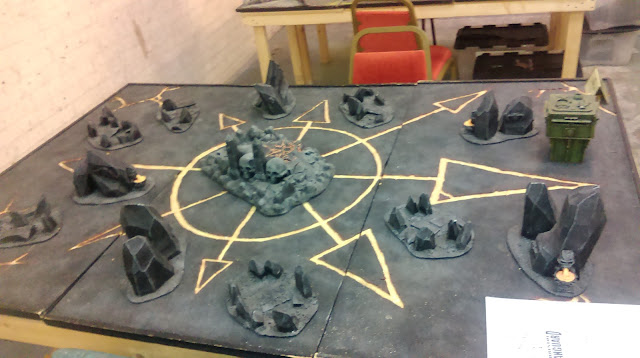 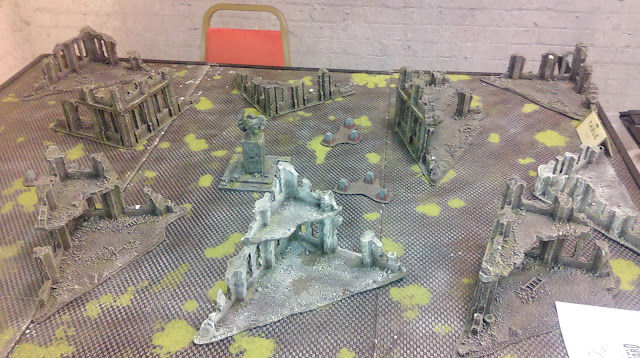 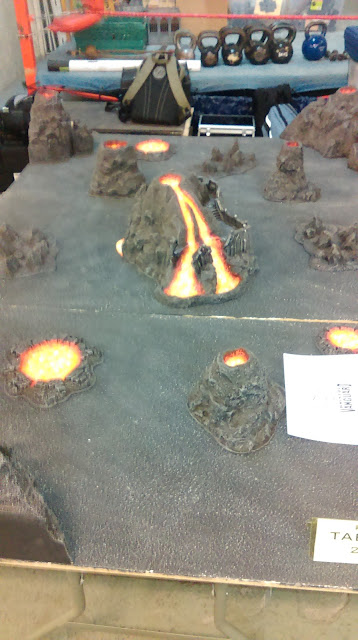 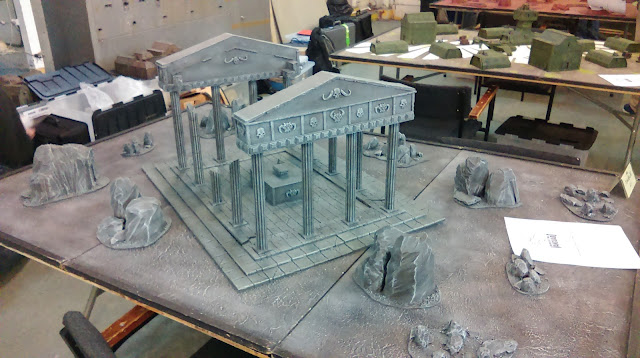 I hope you enjoyed that little round up and rest assured normal posting will no resume. Back to Emperor's Children reviews tomorrow :) I will also get some decent pictures of my Thanatars up with the HQ asap too!