As you can see, I have the obligatory 8th edition picture up, so you all know I mean business! There have already been several excellent posts looking at the changes we know are coming in 40k, From the Fang, The Burning Eye, Warpstone Flux, StandWargaming to name a few. Plus if you visit Faeit212 you'll find the latest updates on information as it comes out, or of course the new shiny Warhammer Community website.

So instead of cycling through all these changes, as they will come whatever my opinion, I have decided to look at the armies represented in 40k and what this means for me and my collections. Regular visitors will know that I was bought the Triumverate of Ynnead not long ago, and I painted up the Yncarne quick sharp. This had spurred me on to start an Eldar army of Ynnari, avoiding as much filth as possible with the what was the then Eldar Codex.

My motivations for this army have swung massively to indifference right now... Fortunately I have only the Triumverate and 10 Wraithblades to speak of for this foray into the Ynnari so I won't be losing out on much hobby capital.

The BIG change coming regarding 40k for me is two-fold.

The Warhammer Community team have given us absolute clarification that their will be multiple force organisation charts to build your army with. I can't help but feel this was adopted in some way from 30k where you have different force orgs representing different styles of armies, these alternate charts allow extra heavies or lords of war for example. 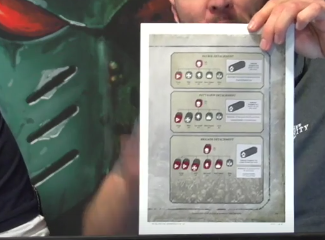 This appears to be coupled with command points that reward particular thematic use of the force organisation charts. I am, predominantly, a player of fluff and theme. There are several armies in the 40k universe, that as much as I love, I would never collect. This is mostly due to the limitation of formations or troop choice, making it very difficult to actually present the theme that I want to convey.

I am very much hoping that with such a multitude of force orgs (I believe they mentioned something in the region of 14 different charts), there will be greater scope to theme your army according to armies within the lore.

IF this is the case, I would be very, very tempted to start something like an Ork army or perhaps the Militarum Tempestus. This also brings me to the second point...

The Codex is Dead. Long Live the Codex.

I LOVE that they are resetting all rules to zero. This will go a long way to helping a relatively "balanced" meta appear. Yes, something will be stronger and abusable to a degree. But they seem to have been very hot on closing as many loop holes as possible when it comes to power gaming and death star combinations.

Rather than a codex being released and either failing to fit the meta by being underpowered or overpowered, OR by being quickly left behind by a new edition or new releases, this resets all armies to 0. It also promises that each new codex equivalent will not have been developed in a vacuum, but with relative consideration to its context within the other armies.

This, as much as the thematic force organisation charts, excites me to start looking at the lesser collected armies. Not only will they hopefully have more ways to be played, but they will be coming from a position of equality (as much as is possible) with the other armies in 40k.

Obviously I can't fully answer this till the rules come out. But I will be buying them all on drop and perusing each army, and one will be picked to start a serious foray back into 40k. And I do have my favourites. Currently at the fore of my mind are:

I'm not going to set up a poll, but if you have any strong opinions on what you would love me to collect, either from the above or elsewhere then do let me know in the comments. Though bear in mind, I'm unlikely to paint any of them in canonical colours :P

That's all from me and my thoughts on 8th edition so far. I don't expect I will have much else to say till its release, which I eagerly anticipate!