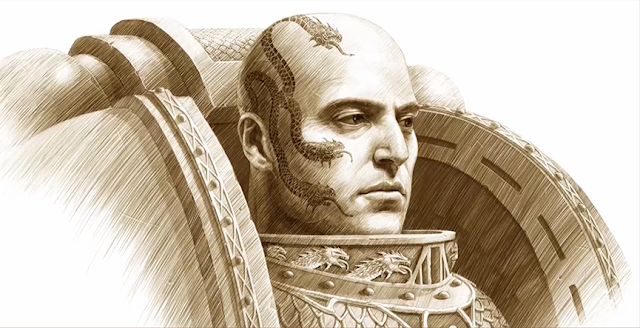 Today I'm going to review two of the Alpha Legion's special characters. These are Armillus Dynat and Exodus. The other remaining characters are the Primarch himself Alpharius Omegon and Autilon Skorr. I will go over Skorr in my next post as he is likely to be my warlord in most games with my Alpha Legion so he will get a whole post detailing tactics and synergy around his rules. I will also go over the additional consul type that you can take as an Alpha legion, the saboteur in the same post.

Armillus Dynat (picture above) is the Harrowmaster of the Alpha Legion, essentially top dog below the Primarch and he wants you to know it! I would rate him as better than any customisable character you can build for the Alpha Legion as his wargear, special rules and importantly points cost are all extremely competitive.

However much like everything with the Alpha Legion, you need to truly consider his rules and how they synergise with the rest of your army. His abilities can be absolutely wasted in the wrong army.

Armillus has praetor level stats but has an extra wound making him a T4 four wound 2+/4++ HQ as he has the standard iron halo. In addition to his impressive stats he also has 4 special rules:

Jealous Command: Must be Warlord unless Alpharius is Present

The Harrowing: This special rule is the real deal. It allows any Alpha Legion unit to re-roll sweeping advances and add +1 to the vehicle damage table WHILST in the opponent deployment zone.

Weapon Mastery: This allows Armillus to pick and choose which weapon he attacks with for each individual attack - fantastic given his wargear (see below).

In addition to his special rules Dynat has a thunder hammer, a power sword, phosphex bombs, a cognis signum, venom spheres and krak grenades. The combination of the hammer and sword allow Dynat to effectively take on marines at initiative and AP3 or to buff his strength to 8 and his AP2 but strike last.

Phosphex bombs are 6 inch ranged strength 5 AP2 one use only poisoned (3+) grenades that you can adjust the scatter of by 2 inches after normal scatter provided it covers more models and also turns that area into dangerous terrain.

Bizarrely, beyond grenades Armillus has no gun. HOWEVER I think this is deliberate as it means that every round he can use his cognis signum to grant +1 BS to a single unit within 6 inches. This could be absolutely devastating if he is next to a Sicaran venator and you really need a tank to explode! Equally you can apply it to a squad of veterans with meltaguns or a 20 man squad using Fury of the Legion (allows bolters to fire twice including rapid fire so 4 shots each within 12 inches but can't fire next turn). I feel his lack of a ranged weapon is because of this personally, or just happenstance!

Overall: I really really like Armillus Dynat (plus his model is lovely), he has the staying power in combat to take on pretty much any generic character and a lot of named ones but keep him away from any of the big hitters. However you NEED to plan your army around his special rules. He naturally engenders himself towards an Alpha strike list (Irony!) such that you are immediately in the enemies deployment zone and are able to take full advantage of the Harrowing special rule. Drop pod Based units using the orbital assault rite of war would make perfect sense with Armillus.

Given that you have the Alpha Legions Mutable tactics on top of this, depending on whether you are facing a mech heavy or infantry heavy army you can adapt your rules choice to reflect this. If mech heavy then pick tank hunters as your mutable tactic and deep strike in and blow those tanks up with your +1 on the damage table and your tank hunter re-roll.

If infantry heavy then choose counter attack and deep strike in. You will have more attacks if charged giving you a better advantage of winning combat and taking advantage of the sweeping advance re-roll as well.

Alpha legion is all about Synergy and Armillus Dynat is a good example of how you have to take that word seriously with this legion to prevent your lists becoming a mish mash mismatch of special rules that don't fit together. 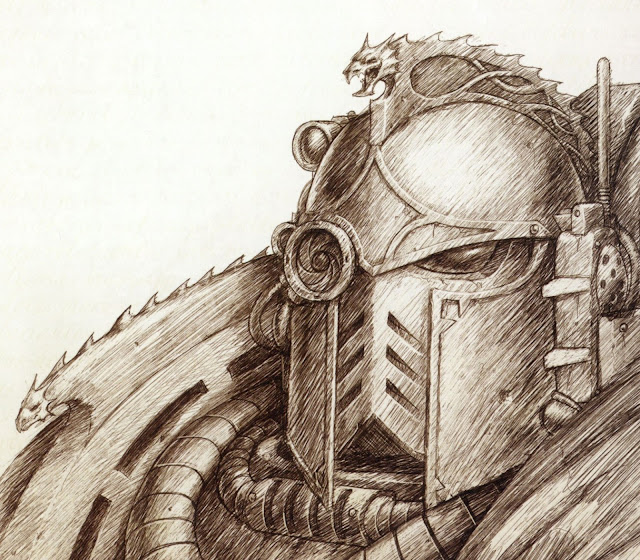 Exodus (above) is most probably the codename for a single specialist killer within the Alpha Legions ranks. A ranged master of death that has some incredible abilities that you can utilise to pick off snowflakes and special weapons.

A toughness 4 with 3 wounds on a 3+ save does not a tough character make! However Exodus has a list of special rules as long as your arm to help with this He has infiltrate, scout, move through cover, acute senses, and he is wearing cameoline for that +1 improved cover save. All of this obviously sets him up well to stick to a good piece of terrain providing him with an adequate cover save and a good view of the battlefield. He also has a nice BS of 6.

You will need to make good use of infiltrate and scout to make the most of his 36 inch ranged gun whilst making sure he is not too exposed to the enemy. Potentially he has excellent viability as a controlling force with his fire lines affecting enemy movement.

Exodus has two special rules unique to him and then his glorious piece of wargear The Instrument, find out more below:

Lone Killer: Can never fulfil the compulsory HQ slot. At a cost of just over 100 points (by 3 meltabombs) he is cheap enough to squeeze into normal tournament lists (1750-1850) along with a cheaper HQ but he become all the more effective in an army above 2000 points where he can really compliment another HQ and the force as a whole.

Assassin's Shot: Any to hit roll of a 4+ allows Exodus to choose who his shot hits. Obviously this can allow you to pick out sergeants and weaker independent characters but the real utility of this special rule is picking off those pesky special weapons like suspensor web missile launchers and melta guns.

This weapon has two different profiles. It can be fired as either:

Which is great at plinking wounds of squads with the 4 shots, ignoring Solar Auxilia saves and having the potential to rend against 2+ saves.

Or it can be fired as:

This shot is excellent at taking wounds off larger creatures with 3+ saves where the extra strength helps greatly (looking at you mechanicum) or injuring sergeants. With rending always a possibility this can really ruin someone's day if they fail that crucial save!

Overall: As a character I love Exodus, he fits the feel and ideology of the Alpha Legion particularly well. Unnamed and unknown and utterly replaceable while being incredibly lethal. However I feel that his rules, whilst good, aren't enough to make me really want him in a force. I think that anyone who is aware of his capabilities will be sure to pick him off soon and he is unlikely to have a cover save adequate to really protect him and ignores cover AP3 isn't all that rare these days (or those days I suppose in the 31st millennium...). To use him effectively requires you to have a well designed army which FORCES your opponent to very quickly apply target priority. For this reason I actually think Exodus and Armillus Dynat in an Alpha Strike army go very well together.

Your opponent would then have to address the danger in his own deployment zone very quickly which should hopefully allow Exodus to do his business very well.

In my next Alpha Legion Article I will go over Autilon Skorr as well as the Saboteur Consul Unique to the Alpha Legion. I will give you a brief overview of how I intend to use Skorr as my Warlord and a few sample lists I have been working on. After that I will get around to covering the special weapons and units of the Alpha Legion, before finishing up with the big daddy that is Alpharius Omegon.

I hope you're enjoying this little series, but any advice on how to improve these types of articles is always welcomed :)