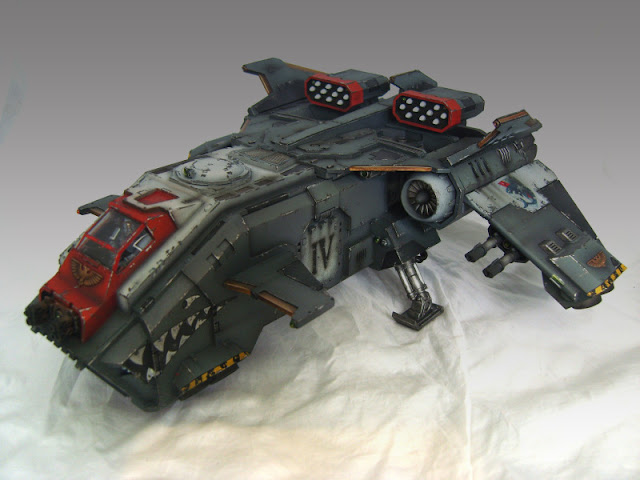 Taken from BulldogUK's Photobucket because its awesome, all rights lie with BulldogUK!


Upon request I am going to review the Storm Eagle today and that will be followed later this week by the Primaris Lightning Strike Fighter as well. So without further ado lets get into the nitty gritty!

On the bare bones of it the Storm Eagle is a 12 AV all round flyer with 4 HP that has a carrying capacity of 20 for none-bulky models and applying the normal restriction for carrying bulky models. The Storm Eagle can carry very bulky models as far as I can see which would be vital in taking Primarchs, though I haven't checked any FAQ's to see if this has been amended, in my book (the basic crusade book compilation) it just list the capacity as 20 with no restrictions beyond the norm.

Crucially the Storm eagle has access point on both sides, the front and the rear of the craft, giving maximum flexibility when it comes to dismounting your squads. This is coupled with the fact that the storm eagle is an Assault Vehicle, so you can load up your nasty close combat squad, drop them off by the enemy and watch them wreak havoc in the back lines!! Just be careful that the squad your assaulting isn't hiding Alpharius....

Like the Fire raptor, the Storm Eagle also has deepstrike if you want to be a flashy bastard and cut it close to the wind!

Equally it also have machine spirit if you need to clear out a couple of targets in a turn.

Overall A solid flyer chassis with durability and an incredible transport capacity attached to an assault vehicle, essentially this is a storm raven on steroids in the 31st millennium!

The Storm eagle comes with some decent equipment as standard and has some excellent options available to it. It comes with a hull mounted twin linked heavy bolter, four tempest missiles (S6 AP4) and a hull mounted Vengeance Launcher (first in line for cool names obviously).

The vengeance launcher is a 48 inch range S5 AP4, heavy 2, large blast weapon. Obviously suffers a little bit from its AP4 but that will still work wonders against much of the none space marine units available in 30k and a plethora of units in 40k if you are using it in that setting. The heavy 2 fire rate will really let you lie these pie plates down on blob squads of solar auxilia or fearless blobs of adsecularis covenant, ignoring their armour saves as standard.

In terms of upgrades it has the ubiquitous availability of armoured ceramite, extra armour and a searchlight. Armoured ceramite is a MUST on this flyer more so than any offensive crafts you field. This is due to the expense of both the flyer and more importantly the squad inside! It would be sad to skimp on this and then be brought down by a melta that mulches half of your 20 man squad in a fireball!!!

Offensively it has a plethora of upgardes, each with different levels of desirability.

The heavy bolter can be swapped for a twin linked multi-melta or a single missile launcher, and the tempest missiles can be switched for either hellstrike missile or a pair of twin linked lascannons. The hellstrike missile being ordinance as Westrider pointed out in the comments of my Fire Raptor review will, rules as written, cause all other weapons to snap fire. So particularly on this flyer just ignore them as an upgrade that isn't worth taking. I would think similarly about the missile launcher, despite being cheap at 5 points, you could give a sergeant a melta bomb which would probably do more damage back overall.

The multi-melta and the lascannon have merit as considerations (being 15 and 40 points respectively), however I would really only ever consider the multi-melta personally. With the addition of lascannons on top of armoured ceramite, your TRANSPORT will be edging towards 300 points alone.

Overall it is important to remember that this is not a gun platform, and the real cost of this flyer must be taken as the flyer PLUS the squad cost.

The key aspects of using the Storm Eagle are really summarised above in the final sentence of the equipment section. You have to be acutely aware that the primary purpose of the Storm Eagle is to deliver a unit to the right place at the right time. Until you have done that I would ALWAYS jink to keep this flyer alive. This is also a unit that more than most will benefit from reserve modifiers, ensuring you can bring your flyer on OR keep it off so that the unit it carries is kept safe and delivered exactly when it needs to be.

With a capacity of 20 you can fit a lot of hurt in here, and the more expensive that unit is the less inclined I would be to give this flyer any upgrade beyond armoured ceramite. Conversely if you are transporting a 20 man tactical squad to take advantage of a well timed Fury of the Legion shooting attack whilst camping an objective, I would be inclined to give the Storm Eagle the lascannon upgrade such that it has real duality after dropping off its cargo, with the vengeance launcher and heavy bolter taking care of hordes and the lascannons targeting armour or snowflake character/units.

Overall the Storm Eagle will depend a lot on the list you have placed it in and the abilities of the commanding general. When used to its greatest efficacy it will tear the heart out of the enemy from a well timed squad drop that can then shoot and/or assault from it. But I feel it is all to easy to misjudge and waste its potential.

Certainly I do not think I am up to the task at utilising this vehicle to its fullest capabilities.

As always, I hope you enjoyed this article and my thoughts on it! Please feel free to share this as you see fit with a link and if you want to read more please comment with suggestions or give me a +1 and subscribe :)