Blood Angels - are we that bad? Part 1 of a retrospective musing - HQ. 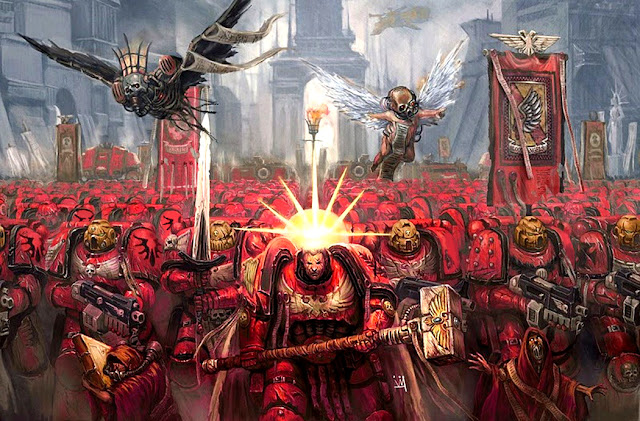 So today I'd like to do Part 1 of a look at the Blood Angels Codex going over the HQ choice. Obviously there are plenty of reviews out there, but in the context of the new Space marines codex and the impending Dark Angels codex many people have been up in arms about both Space Wolves and Blood Angels. The obvious points of contention here are the disparity in points costs for common units (e.g. vanguard veteran power weapons) and even base stat lines (e.g. scouts WS and BS). These are all valid concerns and too a certain extent I'm not going to argue that we received a bit of a crapping on...

Aside from these disparities I'm going to go over the codex and hopefully show that these disparities alone do not mean we have a bad codex. I actually think it is a very well written codex and remains a mid level of competitiveness if that is your thing. I'm not going to pretend that it competes with eldar and decurions shenanigans but I think it holds it own just fine and combined with the Shield of Baal supplements (which was a whole lot of love more than many other codices got and essentially fills our formation quota lacking in the codex.) it has great flavour and battlefield punch.

Added to this we are not Dark Eldar (no lord of war and utterly, literally utterly useless units), Tyranids and Orks (difficult armies at the best of times with limited competitive builds and units requiring excellent generalship), Chaos Space marines (well,,, lots and lots and lots - caveat still to be updated), Sisters of battle (.......). And if you look historically at codices that have been left behind such as the previous Dark Angels Codex I laugh at anyone that wants to argue that the gap in power to the Blood Angels Codex from the current crop is similar. It isn't, it just isn't.

The Blood Angels have their pride bruised and their feathers ruffled but they are still alive and kicking and I hope to go over the Codex sections 1 at a time to illustrate some of these elements. But I am still hoping for a FAQ-up to fix some bits :P

So what do we have in the HQ department then:

First off lets count this shall we... 6 unique character HQ's (7 including Shield of Baal) plus the 2 x generic unique characters sanguinary priest and Librarian Dreadnought HQ, that alone is nice to have compared to say Salamanders/Ravenguard/Imperial Fists with... 3 between them (maybe 4 I can't remember off the top of my head.) The point is we are individual beyond just red marines still. Now to actually look at some competitive options.


Astorath the Grim, Redeemer of the Lost: Essentially a 3 wound beast of a chaplain with a 2+/4++ that synergises so damn well with Death Company (who are still the boss) granting re-rolls to hit and to wound in the fight sub-phase, every fight sub-phase, not the charge, EVERY fight sub-phase. Yes his axe is unwieldy compared to say the Emperor's champion's sword. But honestly how many axes don't have unwieldy? I'm not an expert but the only one that springs to mind is in OUR codex on OUR LoW Dante! (Who is also boss). Also has adamantium will (Warlord Trait) for protecting your Death company from Pyschic attacks.

Verdict: Stick him in a jump pack unit of Death Company as the striking blow of your force and he will wreck face. He's not a point and click Lysander but he costs 165 points versus 230 points. He's 15 points cheaper than High Marshall helbrecht who only has an AP3 power sword versus Astorath's 2+. I know who I'd bet on.

Mephiston Lord of Death: Adamantium will (Warlord Trait), psyhic hood and mastery level 3? Psychic beast that can make himself strength 10 so is capable of ripping through tanks and insta gibbing many things even without force activated on his sword (wording just says his force sword is strength 10 no mention of force being activated. Also has toughness 5 and a 2+ save for 175 points. Only let down is lack of an invulnerable save or eternal warrior. His transfixing gaze (roll 2D6 and higher than opponent leadership hits on 2+) is a nice bonus to his already good stats and price.

Verdict: Tigurius is 10 points less. has 1S and 1T less. Has a lower save (3+). Doesn't have adamantium will. Doesn't have furious charge. Doesn't have transfixing gaze. Doesn't have warp charge 1 - I am strength 10 - I will rip your landraider to pieces power. An excellent choice for the psychically engendered.

The Sanguinor The Golden Angel: He doesn't have independent character and he costs 200 points. BUT he is a 2+/4++ eternal warrior WS8, S5, I6, W3, furious charging, fear inducing, jump packing, AP3 master crafted sword wielding beast. Who also grants a 12" bubble of fearless to ANY friendly imperium army units around him (Warlord Trait) and any models within 6" add + 1 to their attacks. And he re-rolls tro hit and to wound in a challenge. He's not perfect but for the price he comes with a whole lot of awesome baggage.

Verdict: Mid level useful in a competitive list but with correct usage can murder many things particularly of the 3+ save variety. AP2 weapons will hurt but he has eternal warrior and a 4++ to shake the odd wound. Avoid AP2 fire and you are good to go.

Brother Corbulo Keeper of the Red Grail: 120 points with a 3+/5+ FNP. Has +1 initiative if Warlord. Also has 3 wounds for that price furious charge, a +1 strength rending chainsword, an ability to allow the re-roll of a single seize roll, scatter roll, reserve roll, to hit roll, to wound roll or to save roll per game. Only once but maximum tactical utility. That vindicator needs to hit that blob of centurions? You got it. Bam. Also grants +1 WS and +1 I to units within 6".

Verdict: A very solid support HQ, particularly if you are running a beat stick like Dante for example. Excellent force multiplier if positioned correctly and might just make that crucial difference with a re-roll.  Strongly recommended for a support roll.

Verdict: For 15 points more than a similarly kitted out Captain you get a mastercrafted hammer, counter attack and reserve roll manipulations. If there was a relic which granted that for 15 points? EVERYONE would take. A solid quite nice and fluffy character.

Sanguinary Priest: Yes they are a single HQ choice now. And that is how it should be, it makes sense, I'm also not comparing this to the old codex but to the field it sits in right now. This fella brings FNP and + 1 to WS to the party all for 60 points with 2 wounds. You can also give him a jump pack if you want to give that WS buff to Death company making them even more potent.

Verdict: One of the best value utility cheap HQ's in any marine codex. There I said it. Perfect for low points value games as a single HQ or as a support HQ.

Verdict: Popular and rightly so. Personally I'd take Mephiston but his ability to drop pod turn one is a lovely tactical buff to him.

In the balance of fairness I'll go over the others very quickly.

Tycho of either variety: Nope. Nope. A big tall glass of nope. Not even from a fluff stand point his he ever worth taking as this badass sucks so hard compared to his fluff.

Librarian: Fine, as good as the vanilla equivalent. But take Mephiston. (Ironically I have 2 of these models as presents so they will be in my list). Not bad at all, pretty good but nothing WOW here.

Chaplain: Pretty much as above with the librarian but I would rather take a Sanguinary priest for 30 points less. Not bad but much like the vanilla version, there are just better options out there.

Techmarine: Does anyone take these beyond fluff and style and thunderfire cannons? I would genuinely like to know.

Captain: Again, bog standard. Some of the relics can make him pretty tasty but I think there is always a character I would take over him any day of the week personally. They all bring a lot of special rules that really enhance the army as a whole.

Well there we are! A quick retrospective of Blood Angel HQ's. There are so doozys aren't there? At least I think so and I hope I have convinced you guys that it is a packed slot with fluff, flavour and plenty of fight all combined. I think the comparison to Tigurius is one of the best I could come up with for me. The only real loser is Tycho, man they screwed him up so bloody much.

I will go over the Elites section when I have time to sit down and write, will be honest this post has taken a lot out of me! I'm just not a born writer...

Any comments questions or constructive criticisms (I will have only polite people on here please). Please leave a comment, I'd love to know if you agree or disagree.

As I said we have been crapped on with recent vanilla changes but we are definitely still a good codex with lots to offer.