Blood Angels - Are we that bad? Part 2 Troops 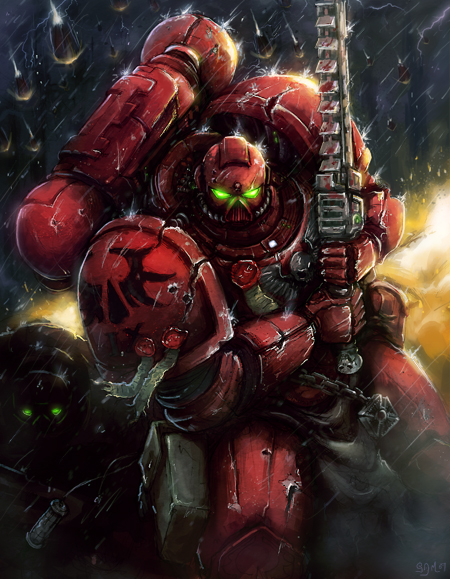 Hello and welcome back to the second part of my retrospective thoughts on the Blood Angels codex in light of the release and obvious disparities in the Vanilla marines codex. A short one today!

My aim in these article is to show that despite the doom and gloom naysayers all about, the Blood Angels still have a solid codex both fluff wise and competitively on the tablet top.

As I've said before, these articles are not going to argue we didn't get the slightly suspect and smelly end of the stick but just to give dues to the bits of our codex that are really good and are the reasons that you play Blood Angels. As an example a friend of mine was messaging me about the injustice of the scouts stat line, which is I agree, ridiculous. However his point was that now he can't run a scout army of Blood Angels.. to which I replied that yes you should be able to run scout Blood Angels if you want and have their stats in line with Vanilla marines, but at the same time I don't understand why you are running Blood Angels for a scout army? Surely the reason you play Blood Angels is so you can access their unique and fluffy units that makes them different from red marines?

That is just a personal bug bear of mine but I think most people will, to greater and lesser extents see my point. I'm currently swiping up cheap shield of baal death company kits so I can run a death company army. Its expensive in points and elite as hell but by god its as unique as the Sons of Sanguinius get and it'll look cool as hell.

So in this category I will cover the two basic troops options from the codex but also look at the unique Death company troop options that come in the shield of baal campaign set.

Tactical squad: So these guys are pretty much as standard as you can get with one exception. Flamers. Beautiful promethium fed flamers. As a 5 man squad these guys can rock a heavy flamer and 2 x gunslinging hand flamers on the sergeant. This provides a nice and cheap drop pod unit that can lay down some excellent ignores cover fire that can also really thin out horde armies.

Verdict: These guys are as good as they always have been in any space marine codex. The flamers give them a nice little unique something to flash on the table, but I do genuinely feel this belongs to the Salamanders remit and if its going to be unique to any chapter it should be unique to them. Still, I shan't complain!

Scouts: Well, yeah. These guys have nothing special going for them and they suffer an inexplicable lesser ability to shoot compared to almost all their loyalist brethren, Space Wolves excepted (I think..?). However, more inexplicably, they suffer a lesser ability to FIGHT, you know, for the blood crazed close combat chapter that specialises in fast hard hitting close combat, hand to hand, mano a mano style fighting tooth and nail stuff. Anyway, they are still useful as a tax if you want to just fill up on elites and such but this really should receive an FAQ in short order. Its an adjustment of 2 number and there is absolutely no reason for GW not to do it other than being lazy or being fearful of setting a precedent. I am inclined to believe it will be the latter that prevents them from doing it if they choose to leave them as is.

Verdict: Fine as they are but given how long in advance GW plans a codex (and I can't believe there wasnt some overlap between the vanilla being written as Blood Angels being finished) this should have been dealt with early and headed off. Le sigh.

Cassor the Damned: So Cassor is essentially a Death Company dreadnought with blood talons which are Sx2 AP2 close combat weapons, and these come with underslung melta gun and storm bolter. This build is 135 in the codex and 140 for this guy who occupies a troop slot. This is a steal and makes a full death company army viable. No dedicated transport options though!

Verdict: This chap is an absolute must if you want a full death company army taking up that valuable troop slot that he does for only 5 points more over the unnamed build. His biggest weakness is the lack of a transport option but I am getting round this by sticking him in the back of a storm raven. You could of course also buy a fast attack slot drop pod but I'm inclined to take the storm raven as air support also.

Raphen's Death Company: This is a funny one. 5 man Death Company squad with fixed options and no way to increase the squad size. The fixed options are a thunder hammer, a power fist, a power sword and an inferno pistol, with 1 squad member just vanilla with chainsword and bolt pistol. This comes in at 210 points, They also come equipped with jump packs I should note. This would cost 10 points less as a normal build squad so again you are paying a tiny tax to get that all important troop choice selection. The problem here comes in the weapon choice and squad size, they aren't really designed particularly well for any one role. However these guys and Cassor the Damned allow you to have a a full death company army, particularly if you take the baal strike force detachment (which I will cover later on) as this allows you to take 4 elites.

Verdict: This squad is limited and does lack a clear competitive focus, BUT you aren't taking it for that you are taking it so you are entirely black and red army of frothing maniacs. Personally I will hide them away and use them to either grab objectives (being a T4, 3+/5+ FNP objective secured unit) or I will use them to bust tanks with the power fist, thunder hammer and inferno pistol all contributing good damage to that end.

Overall, the troop selection is small but we have a nice addition to your choices with the Shield of Baal campaign which although not optimised builds they can still be effective and grant you a great deal of fluff based variety.

The real winner in the selection is the drop podding wall of flaming death with the trip flamer tactical marines which I think will and are a popular build for alpha strike blood angel armies. However the obvious losers are the scouts with their bizarrely diminished stats line that we can only hope is rectified with haste.

As I said above though, scouts are not why you take Blood Angels and my main grip with this category is that they allowed force org shenanigans around bikes becoming troops to stand in the vanilla codex. By that logic surely a unique Blood Angel trait would be a relic jump pack that unlocks assault marines as troop by paying a premium for the jump pack. I think that would have been fair and Blood Angel players all over would have been happy as Larry.

But that isn't the way the cookie has crumbled and ultimately, the troops aren't what make this codex great (and it is great) so next time we will go through the Elites which will be a big old post I think. Following that will be Part 4 with heavy and fast attack and finally I will do part 5 which will look at relics and detachments both in the code and in shield of baal Leviathan which really should have been in the codex.

In between that I hope to post some finished assault terminators and a WIP librarian as well!