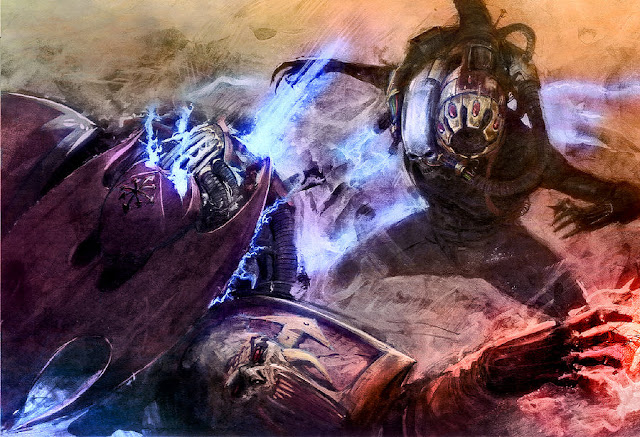 Taking a break from my review of the badass Blood Angels to bring you some assassin-y goodness.


I pre-ordered the assassin game Execution Force and have played precisely... 0 games with it... Ahem. But last night I sat down and managed to build and paint the Culexus to a standard I am happy with in a couple of hours. Its a brilliant model but due to the skin tight nature of its clothing it has a lot less fiddly detail than a terminator sergeant for example.

I wanted to paint it in slightly comic book style colours so I went for a dark blue highlighted body suit with red to set it off. I went for an antique-y look with the bizarre headset thing and then further practiced my OSL skills with the opening of the gun. I'm pretty happy with the OSL effect and how the model looks overall, I even think I managed to get a decent rust effect on the base!

The model has been based to match my templars as the Culexus is going to be their anti-pysker ace in the hole. The templars are set up to be very fluffy with big crusade squads and lots of hand to hand goodness and the Culexus felt like a natural and competitive match for their hatred of Pyskers.

Anyway here are some pictures, sadly the flash has washed out the metal bits, they have a lot more depth in person but its a grey day and flash was the only way to get usable piccies!

As a side note, how cool does his shadow look!?

In other news I will be  playing the first of a set of linked narrative games tonight. Tonights game will be the Scouring versus Orks. The lead in fluff for this game is a small Ork hulk crashing on to a planet that the Templars are currently investigating. We haven't met before so as well as the game I think we will work out the rest of the narrative but this should be a fun 5-6 games that incentivise me to finish my templars off as I now have all the models I need!

This will mean a slight break from painting Blood Angels but I will be getting back to them as I want to take them to Blog Wars 10, either as the archangels or as a whole army of Death Company. I have enough Death Company to make a 1250 point force right now I just need 5 more Death Company, a Stormraven and another Death Company dreadnought with a drop pod.

But I hope to get you some OK battle reports up in the future. If I am on my A game tonight I may remember to take pictures! But I'm pretty bad for that so a short synopsis might be the only thing you get from this first game.

Just a quick picture of my nearly finished lightning claw terminator sergeant. I was really pleased with this squad as they were made from the bog standard termies that come with Death Storm with just the claws and spare gubbins added to them from the Blood Angel Specific terminators set and they look great! Again I'm pleased with the hair on this one. He just needs basing but the rest of the squad need all the highlighting and layering doing, I just fancied finishing one of them off. Sometimes squad painting get so dull!!

I'm moving house this weekend and internet isn't going to be up till the 8th of July so this will likely be my last post till then, unless I get spare time at work to write the next part of my reviews.