Blood Angels - Are we that bad? Part 4 - Fast Attack and Heavy Support


This is my penultimate retrospective of the blood angels codex assessing how it work relative to the new space marines and hopefully convincing many people that we still have great unique units that can mix it with some of the best. We aren't the top tier dog codex but we are not a bad codex and I think its important to make this distinction. 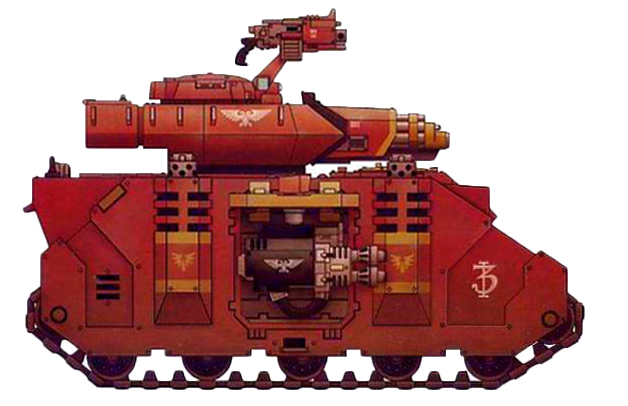 Today I will be dealing with the Fast Attack and Heavy Support options in the codex. Despite there being a wealth of options in these sections, this part of the review will be fairly short, as for the most part these are not significantly different from the vanilla codex, with only 1 unique option among the whole lot!

So before I look at the units (which are virtually identical though sadly lacking a bit compared to vanilla marines) I'm going to look at a key mechanic/wargear option of the blood angels which is primarily a "fast" component but also crops up a lot in the Heavy support section.

Example: The humble rhino can now carry its 10 troops 24 inches in a turn. That is 24 inches and if it survives it can move another 6 inches, disembark 6 inches and up to a 12 inch charge. The range of a rhino is massively increased in an offensive manner when given the fast rule. (Error - no charging from rhino)... But still, as an objective secured unit it effectively has a 27 inch range for grabbing objective (24 inch movement and be within 3 of the objective) or it can disembark a squad for a further objective grabbing reach!

As I said these come standard with some vehicles or are purchasable for 10 points for other vehicles. I think by and large they are great value for 10 points.

Dedicated Transports. This covers the humble Drop pod, Rhino, and Razorback. They are all functionally the same as vanilla marines except that both the rhino and razorback have overcharged engines. In the case of the rhino, the above example illustrates the benefit of being fast, whilst with the razorback the extra speed really increases the threat bubble of their armaments which can be used effectively to making firing lanes with less of the board safe from their reach, especially if equipped with lascannons against vehicles or heavy bolters against mid range infantry.

Assault squads. These guys are not better than the vanilla assault marines, but they aren't worse either. They just fulfil their role in a different way I feel. These guys are well equipped to drop pod in and flame the crap out of a unit, with a regular flamer and 2 hand flamers on the sarge providing ample horde killing goodness. However this does beg the question why not take a 5 man tactical squad with a heavy flamer and 2 hand flamers? (Double Error! I meant to say meltas and inferno pistols but was writing from memory like a fool, these guys can pop open most things on a good to middling day - still don't rate them as an assault units compared to better options though sadly). Assault squads doe have the benefit of furious charge which means that couple with a jump pack assault a squad of 5 will do 5 strength 4 Hammer of wrath attacks, and 15 strength 5 normal attacks which for a barebones 85 points is pretty good. Especially as if you have enough other threats they are likely to be ignored.

Bikes and Assault bike. As far as I can see there is little difference from vanilla marines. I have never found space marines on bike appealing aside from Ravenwing personally. From my standpoint I like the idea of the lighter scouts on bikes but not the full hulkers. These guys also have furious charge of course, which as I state in the assault squad section is a really nice buff on the charge compared to vanilla marines.

Scout Bikes. Exactly the same problem as regular scouts. An additional 1 WS and BS coupled with furious charge would make these an excellent cheap harassing unit but they just aren't worth taking compared to both vanilla marines and other units in the codex like assault marines. Skip unless you're theming a force I would say. As noted in the comments a good delivery system for locator beacons but I still don't like taking scouts in a BA force and there are great ways in formations or wargear to reduce scatter with more flavour. But if you definitely need that precision drop these would be a good way to go!

Landspeeder Squadon. Same as always and no different from Vanilla as far as I can see. The aesthetic of these guys has never appealed to me and I've never had interest in taking them so I'm afraid you'll have to look elsewhere for any useful comments!

Overall. Fast Attack is a solid section if a very unremarkable section in the Blood Angel Codex. It is almost exactly on a par with the Vanilla codex with overcharged engines really standing out as an excellent addition, but these become far more important in heavy support. Furious charged added to hammer of wrath attacks on bikes and jump pack assault are also viable options.

The main discrepancy here is not only scouts and their reduced stats but also the unfathomable exclusion of the stormtalon and land speeder storms. I see no reason why these shouldn't be available to Blood Angels, it just boggles me sometimes!!

So on the big guns as it were. There is a single unique unit in here that I will go over then I will round up my thoughts on the rest in a big jumble as for the most part they are all the same as vanilla or the benefits that Blood Angels gives the vehicles is the same.

Baal Predator. Coming in at 115 points I think this is 10 points overcosted, but its still a good choice. It comes with overcharged engines as stock and it has the option of the triple flame loadout for 135 points and I think that is as good as ever. Blaze up the fields of battle and toast everything in your way. I think if you aren't going for this option then the Dakk predator with assault cannons/heavy bolters is good for the same price but I think I would just take a regular predator and give it overcharged engines to take advantage of the extra range and firing 2 weapons at full BS after a 12 inch move.

Predator and Vindicator. Both are a minor bit more expensive than their Vanilla brethren but not horrendously so. The addition of overcharged engines however can really make them shine. A 12 inch move before firing that autocannon and still having a full BS heavy bolter on the spare? Top notch. Or even better a 12 inch move followed by the demolisher cannon giving it an effective 36 in range, invaluable in delivering that S10 AP1 goodness to the heart of the enemy. I think these both lift these tanks that little bit beyond vanilla ones, but you do pay for it with the upgrade and the base points being higher so its not a gimme by any means.

Whirlwind. These guys also benefit from being able to move 12 and still fire their ordinance regularly but I don't really see the upgrade being that worth it as they are not a terribly competitive choice anyway and they have excellent range. If you take them, take them stock but I would rather spend the points on other things. Saying that, cheap for what they are.

Devastators. Nothing much here part from not having access to heavy grav weapons. I don't like grav weapons I have to say. I think the concept is cool but they are taking place in a saturated special weapons lists and becoming all to easily available I think for weapons of such supposed rarity. Devastators are still good if you already take them but vanilla ones are better.

All landraider variant. Nothing really changed her compared to Vanilla, they all have their strengths and weakness but I genuinely love them all the same. They are such an iconic vehicle for 40k to me, I remember the current kit coming out and being blown away by it. They aren't the most competitive but they are bloody cool as hell!!

Storm Raven Gunship. Last but by no means least. Not unique the Blood Angels for quite some time now, but much like England and our inability to win the world cup we cans till lay claim to being the spiritual home of these great beast. There are no great differences to Vanilla but I love this guy and have recently acquired my own. There are few loadouts on this that aren't great and there are none that are bad. Buy one and enjoy making swoosh noises like I have :D

Overall. The Baal predator is a great unique piece of kit and I think it looks great equipped either way but my preference is certainly for the flame variant to remove stubborn cover hogging units. The overcharged engine upgrade is the next best thing in this section as it really lifts predators and vindicators to another level, if the base points cost was the same as the vanilla then they would be bloody brilliant. The devastators really lose out with no grav cannons but they are still a solid choice if you want a stationary force of covering fire.

Both of these sections suffer from being fairly vanilla in general but with such a glut of options in all other areas of the codex I can't complaint too much. No-one should have trouble making a decently flavour blood angel force. And if you aren't taking those unique units, quite honestly play vanilla. You play blood angels so you can wield their special snowflakes and smash other armies in the face so get to it!

My final instalment will look at our wargear, Lords of War and my pick of the detachments/formations from the codex and the whole shield of Baal supplement story.