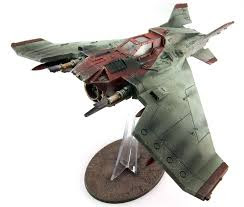 Following on from my Storm Eagle review yesterday, I was also requested to cover the Lightning Strike Fighter that is available as a Fast Attack choice to the Legiones Astartes. So today I will go through the  viability of this unit as a choice in your armies. This is a flyer that I really considered for my armies and I would ideally like one or two in the future.

After today I should have a string of actual hobby updates for you, provided I have enough light to take some semi decent photos! Anyway, on to the review!

The Primaris comes with the Agile special rule to increase its jink save by 1 thereby giving it a 3+ jink if required. It also comes with deep strike (you should know my opinion on this by now...), supersonic for some extra straight line speed (vector dance is always better) and missile barrage.

Overall in terms of its base statistics and special rules it is very much does what it says on the tin. Fast and nimble, but appropriately armoured for being so. The real interest in this flyer comes with its base wargear and the array of options open to it as an upgrade. Much more so than the Xiphon Interceptor the Primaris is a customisable flyer which can go from cheap to oh god I spent to many points on this, very quickly.

As standard the Strike Fighter comes equipped with a chaff launcher for a 4++ against missiles as well as an armoured cockpit to give you a chance of ignoring stunned and shaken results on a 4+. For the points cost, that these come as standard wargear is excellent!

The only standard offensive wargear on this flyer is a single twin linked lascannon. Twin-linked is always brilliant on flimsy chassis flyers as it gives you a little edge in the shooting phase after you have jinked to survive.

In terms of none-weaponry upgrades, the Strike Fighter has a couple of doozies I have to say. One of these is called a Ramjet diffusion grid. This means that enemy attacks against your side and rear armour count their strength as -1, effectively making the AV 11:12:11, which really ups the survive-ability of this flyer. Its also not too expensive for its effect coming in at 4 melta bombs.

Alternatively you could invest your point in ground tracking augries for strafing run and a +1 BS against ground targets, or you can take Battle servitor control (replacing the crew with a BORG) which grants the fighter Tank Hunter. These two in combination grant you excellent anti-armour against ground targets its unreal.

That's all of the none-directly offensive upgrades, and then (oh and how) we get on to the weapon upgrades that are available. These are juicy, if somewhat expensive.

The Lightning has 3 hard points which it can equip with individual weapon loadouts, so you can really mix and match here if you want too (not that I would advise that), and some of these are very hard to come buy with regards to some of their special rules.

Firstly you can add twin-linked autocannons/multi-lasers/missile launchers (with frag and krak) to a single hard point for 20-25 points for each choice. Not much to say here really, all these weapons can come on different chassis or units within a Legion list in 30k and I don't see why you would particularly want to add them on to a flyer that buy its rules is leaning towards anti-tank.

That being said, the multi-laser in particular is not a bad shout for a cheap and effective flyer. The ramjet diffusion grid and multilasers on all three hard points will put this flyer up to 215 points, but with the multi-laser rate of fire, jinking will still allow you to put out some hurt. Its an interesting concept if not one that I would really push to you.

You then have a lot of missile option. Each missile or bomb option either lets you equip two Heavy 1 missiles/bomb or one Heavy 2 bomb cluster, which essentially amounts to the same thing. So with 3 hard points you can equip up to 6 missiles overall or 3 clusters (that amounts to 6 shots). The available options are:

I see no reason to take Sunfury missiles on such a fragile chassis to see it die from gets hot rolls, definitely pass on this option. The Kraken penetrator missile synergises well with the battle servitor upgrade for tank hunter and armourbane so you WILL (unless you angered the dice gods) penetrate if you hit.

The Storm charges are OK, but unless you have severely clustered vehicles to target you're making a bombing run to strip a single hull point, personally I would pass on this one.

Phosphex Bomb Clusters. If there is a more beautiful thing in all of 30k I do not know it!! Bomb Cluster allows you to drop as many of these bombs as your flyer holds in a single bombing run. The first bomb scatters D6 inches (which you may move up to 2 inches as long as it covers more models with the crawling fire special rule) and then the remaining bombs scatter as per barrage rules with the blast marker flipping. So you have an incredibly accurate S5 AP2 small blast that can be up to 6 small blasts, and will wound on a 3+!!!! AND when its done its job it make the area dangerous terrain for anything with a toughness value (lingering death)....  HOWEVER if the flyer suffers a HP of damage and isn't destroyed then roll a D6, on a 6 the Lightning blows up (deadly cargo)!

Overall the lightning has more options than most other things I can think of as a single customisable flyer. This level of customisation accounts for the low starting price as you will invariable upgrade its defenses, pilot or add more weapons on to it. This make it very versatile as a unit choice, especially if you are a dab hand with magnets for the hard points!

Of all the weapon options, I would take either the Kraken missiles or the Phosphex bombs. This would depend on whether your army is lacking anti-armour or anti 2+ save/high toughness infantry. If you opt for Kraken missiles I think the ramjet diffusion grid as well as the battle servitors are well worth the points. I would probably only take 2 hard points (and therefore 4 missiles) however in this case to keep costs down.

With the phosphex bomb cluster I would keep the other upgrades minimal if any and instead concentrate on the ability to bring this flyer on in exactly the right turn. Knowing that any special unit they have will be prey to the bombs on this nippy bugger will be a powerful tool in its own right against your opponent, but if you can bring this on the turn after you've popped that spartan or that squad disembarked from the caestus assault ram or storm eagle and phosphex bomb them to hell will be sweet for you. And probably give sleepless nights to your opponent!! 2+ of these should do the job nicely and then you have a twin linked lascannon to plink shots at any armour. Survivability is less of an issue with this build as you are more of a one trick pony.


Overall the Primaris Lightning Strike Fighter is perfect at filling holes in your army with its high level of customisation, but for me this generally boils down to the kraken or phosphex build, with an honourable mention to the multi-laser. This is another unit that can sucker you into spending too many points on it. If you go over 220 you've gone too far. Under 200 is brilliant but 200-220 is the real sweet spot if you have the points to kit this out.