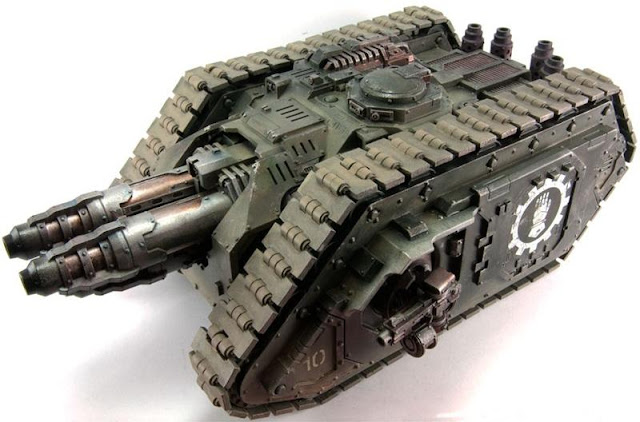 This has been a good weekend for me, mostly because it is the last weekend where I have to be up at 4.45am to go to work for a whole two weeks! The chronic experiment I am conducting ends on Thursday and then I will have 2 weeks off work, before I have to do the whole thing again for the second half of the experiment.

But in those 2 weeks, as well as going up north to take my gran to the cinema I will have plenty of hobby time as well, so you should see some real progress on some of my more immediate hobby projects such as my Death Company and Ravenwing (hopefully both will be completed with time to spare that can be spent on other projects!).

But for today I'm going to get back to Horus Heresy Reviews!! I will still be posting these reviews on my own blog, but I will only review requested units, or units that I am definitely using/buying or considering using/buying. However on SpikeyBits I will be reviewing absolutely everything from all of the Horus Heresy armies, as and when I have the time obviously!

Today we look at the first Lord of War choice I will review, and it is one I sorely want! The Legion Cerberus Heavy Tank Destroyer!!

This beast has 6HP on a 14:14:13 chassis with a marine standard ballistic skill of 4. It is obviously a super-heavy vehicle and comes with all the associated rules that super heavies have. This monster of a tank also has the special rule Reactor Blast, which adds +1 to any roll on the catastrophic damage table when it explodes!

These are really the only stats and rules that are pertinent here, with everything else coming in the equipment section! So a nice short one for you to read before we get into the nitty gritty.

Overview the Cerberus Destroyer has awesome armour, decent hull points (if a little low for a super heavy at near 400 point base cost and it will go out with a big big bang! But the real jam in this sandwich is its equipment loadout below...

As standard the Cerberus comes with Twin-linked Neutron Laser Battery, searchlight, smoke launchers... and oh yeah a FRICKIN' FLARE SHIELD! As standard! A flare shield reduces the strength of incoming attacks against the front armour of the Cerberus by -1 and -2 if it is a template or blast weapon (though this doesn't effect melee or destroyer weapons - then it would be broken). So as standard your 400 point beast is survivable and its weapon packs a serious wallop!

OK - its not a D slap. BUT its special rules are worth "only" having that strength 10. Firstly you can fire it up to THREE times! If this were a straight primary 2/3 it would be extremely OP at the price so I am pleased it is random, one shot is still enough to do some serious damage.

Plus Concussive will aid you against any gigantic monstrosity that works on initiative, though as this is a TANK DESTROYER, its a nice addition but not of primary concern. Shock Pulse however is the bees knees. Any vehicle suffering a penetrating hit from this weapon will be forced to fire snap shots for the next turn. This includes super heavies! So if you are facing any disgusting super heavy that fires template weapons, then 1 shot from this can render it impotent for an entire turn!

Feedback is its internal balancing tool, though its not heavy handed about it. If this weapons fail the penetration roll or fails to wound a target (saved hits do not count for this), roll a D6 on a 1 the Cerberus suffers a single hull point of damage. My issue with this is the wording of the rule. It doesn't clarify two things. 1 - do glancing hits count as successful, as technically they didn't penetrate, my guess is they count as successful but I could easily be out argued on that point I feel by an obstinate SoB. 2 - The actual rule reads "If a weapon with this type fails", now this makes me wonder whether you are intended to resolve each of the D3 shots separately, and if all 3 of them fail to penetrate you would roll 3D6, or if because it is a "type of weapon" you only roll if all 3 shots fail.

I'm genuinely a bit stumped by that one. I'm inclined to roll 3D6 if all 3 fail, purely to err on the side of caution, but I am happy to be convinced that its just 1D6!!

Upgrades include heavy bolter or lascannon sponsons, hunter killer missile, armoured ceramite (most definitely worth the upgrade, particularly if you are using this in 40k) and a whole host of pintle mounted options as follows: twin-linked bolter, combi-bolter, heavy flamer, heavy bolter, and multi-melta.

Overall the Cerberus Destroyer is designed for one thing. Killing tanks! Its almost like its in the name...

From the upgrades I would take a set of lascannon sponsons and armoured ceramite. That pushes this to around 450 points, but I think its worth it. The lascannons are their as some anti-armour back up when you only roll 1 on the D3 shots (or you want to take pop shots at other targets), and armoured ceramite along with the flare shield will keep this beast pumping out shots unless you get it locked in melee. All the other upgrades, are to my mind a waste of points. Remember that the big gun is TWIN-LINKED so you will be hitting far more often than not.

This is relatively simple to use as far as Lords of War goes. Positioning is THE key element with it. You need to have line of sight with the big gun to make use of it and this may leave you vulnerable to return fire somewhat but more importantly being charged by melta bomb wielding f**kers. Remember that melta bombs will ignore both the flare shield AND the armoured ceramite. Its +1 on the catastrophic damage table does increase the likelihood that you can take the squad down with you but lets not think about that!

You need to bubble wrap this tank, or use terrain to keep any threats well away from assaulting you. Other than that, any regular shots will really struggle to do significant damage to it, with S10 weaponry requiring 5's to glance on the front armour due to the flare shield. Plus if you have bubble wrapped the tank against assault you will nearly always get a cover save too! The only ranged threat you need to consider is D weapons. And if you can target any ranged D weapon wielding beasts, with the shock pulse rule you can cause them to snap shoot if they are on a vehicle! So have priorities in order in early rounds.

Overall the Cerberus does what it says on the tin. It can and will destroy tanks with disgusting efficiency. You are unlikely to see or use it below 2000 points (in fact in 30k you will never see it below 2000 points!) so your opponent may have something just as big and nasty. But with a roll of a 5 or 6 you can pump 3 shots into their nasty unit and have a good chance of taking it out. I'm not sure if their is any way to grant tank hunter or armour bane to the Cerberus but that would be DISGUSTING!