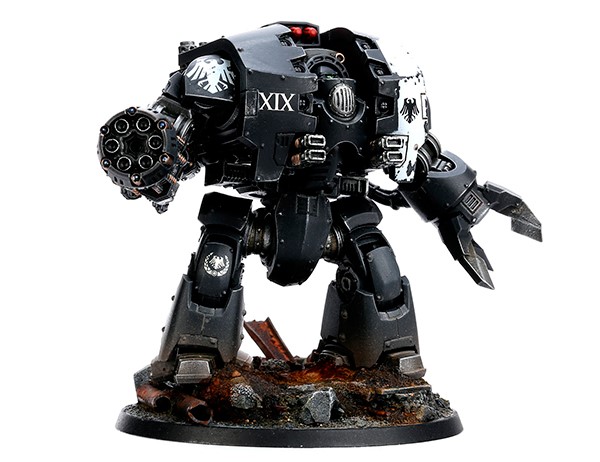 After receiving my 5mm by 1mm magnets from Heresy Miniatures (for a good price an' all) they then sat around waiting for me to go and buy a 5mm drill bit, which in hindsight I could have done whilst waiting for the magnets... But I did not! Anyway, now that I had both I got round to magnetising certain aspects of my Leviathan dreadnough for ease of storage/transportation as well as ease of painting.

Below is the model fully constructed (sans arms which are a project for tomorrow) on a mocked up base. I am making negatives at the moment with bits of plasticard and stuff lying on my desk that will be pressed into green stuff on the base to make a cityscape style base. The raised leg of the Leviathan will be smashing through a raised ledge.

The shoulders are also just blue tacked on at the moment as I am not sure how best to magnetise them till I have a detailed look at the arms. 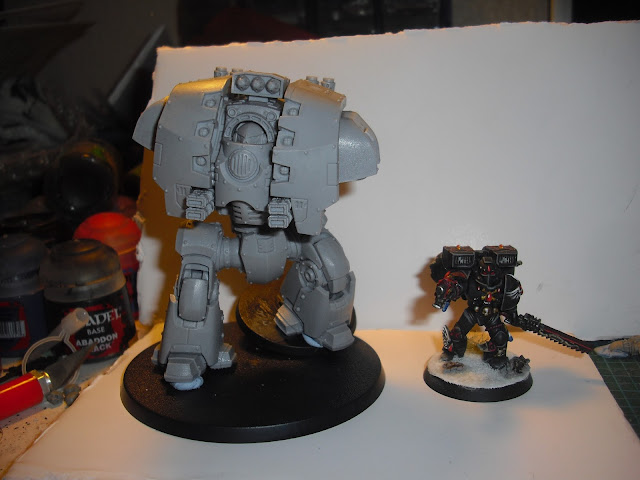 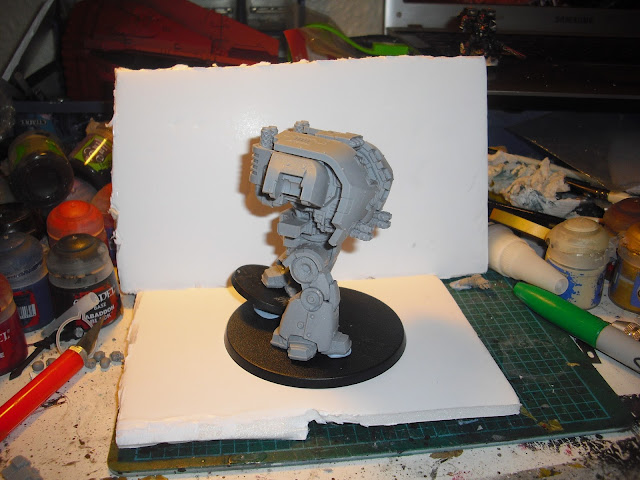 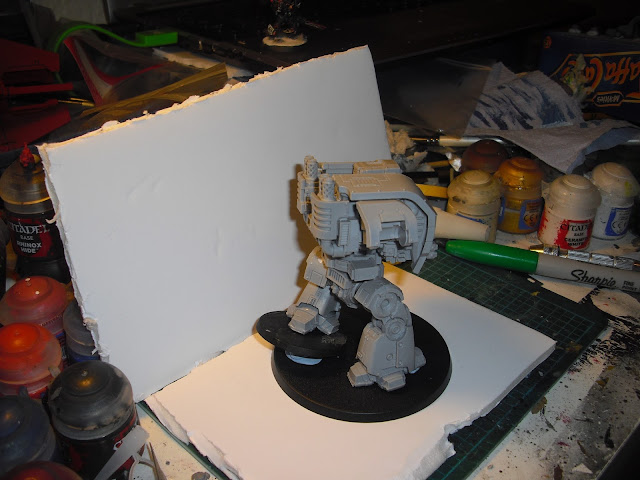 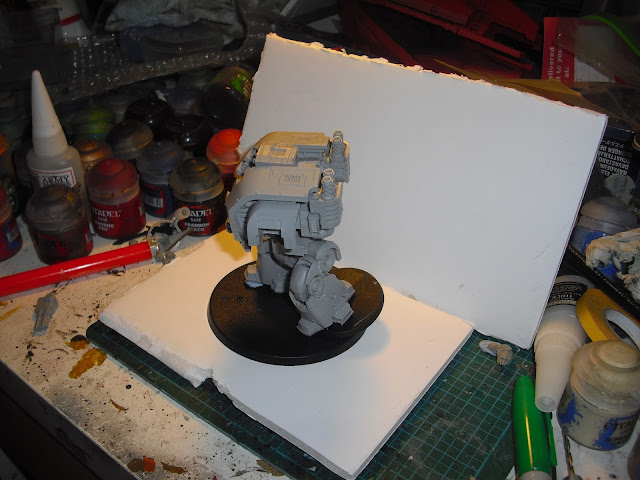 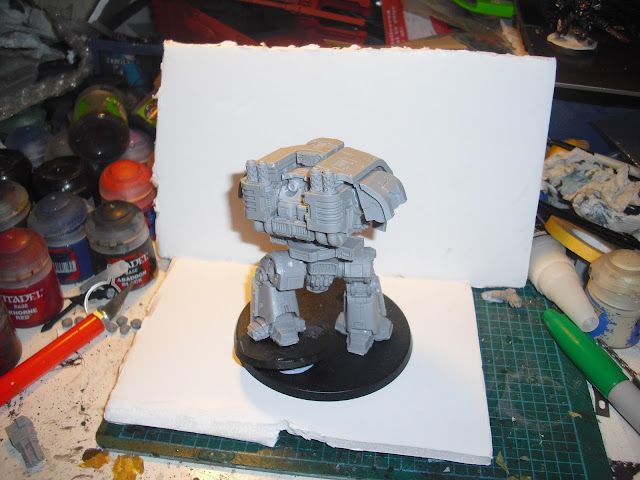 The Leviathan has the volkite chest weaponry equipped in the above pictures, these are the optional chest weapons over the standard heavy flamers. Below you can see the Leviathan disassembled into its constituent parts. You can also see from the very first picture next to my death company marine just how f**king huge this monster is! 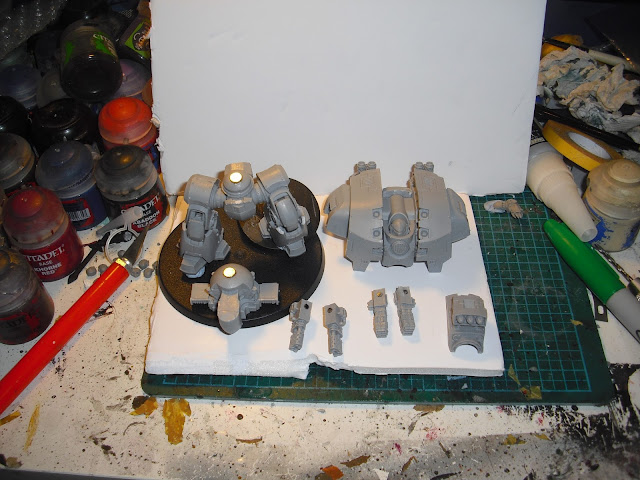 The whole legs assembly is glued in together. Annoyingly the right legs knee cap slipped without me noticing it so its glued lower than I would like, but its looks OK. You can see that the waist has a magnet which attaches the legs to the torso (see below for the connecting magnet picture). Below that is the abdomen, which is magnetised separate from both the torso and the waist. This was for ease of movement at the waist and ease of painting at the torso.

You can also see both heavy flamers and volkite weapons have 2mm magnets in to attach to the torso. The rest of the body is glued together apart from the top head piece with the phosphex launcher on it (bottom right) and the shoulders which are tacked on right now. 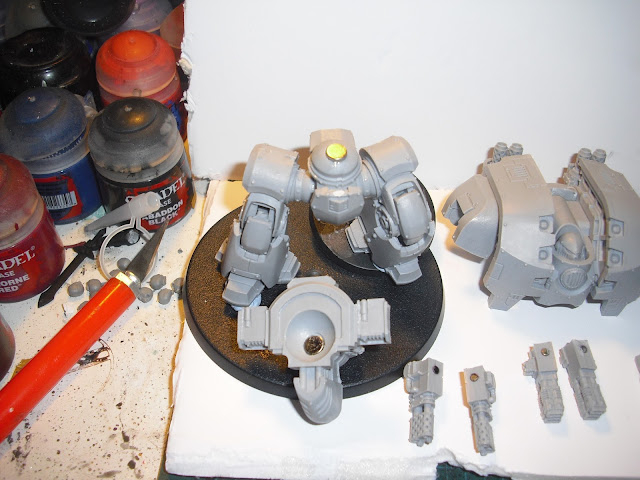 This shows you the magnet inside the abdomen which attaches it to the waist. 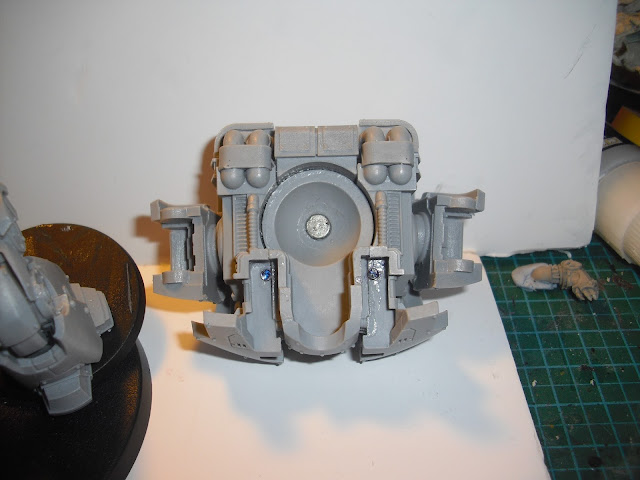 Here you can see the 5mm and 2mm magnets that allow the attachment of the weapon options and the abdomen to the torso. This particular attachment allows no side to side movement because it sit in a recess. All of the upper body movement in the first pictures is created from the waist to abdomen magnet. As I said above this section was magnetised purely to make it easier to paint. 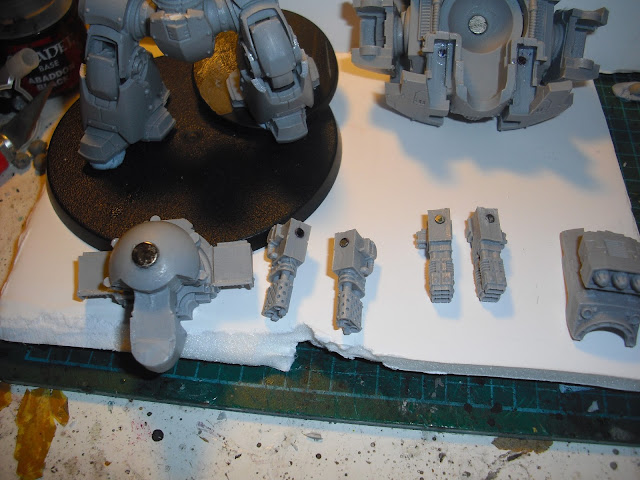 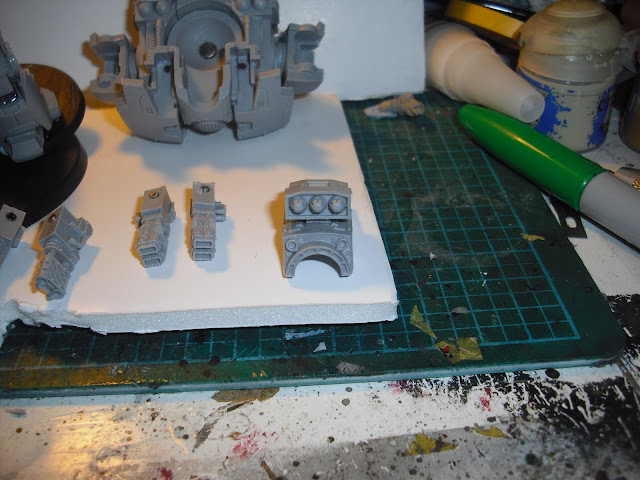 These are just closer up pictures of the magnetised weapons and the top of the torso. This sits in neatly without glue and has been left unattached again for painting purposes. It will be glued in once I have painted underneath it, in particular the head.

I hope that sheds some light on how and why I have magnetised the torso of this beast. I am pleased with the momentum in the pose as well, with it just avoiding the falling over look. Later this week I will have the arms magnetised and will probably have started making cuts into the model for battle damage. As frightening as it sounds!!!