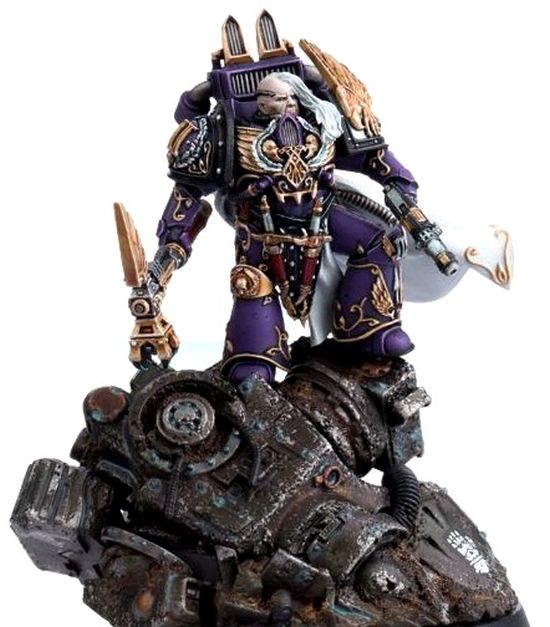 Today, we leave the loyal souls of Saul Tarvitz and Rylanor the Unyielding and descend into the worship of madness and pleasure. Lord Commander Eidolon (just for you Nick :P), always so condescending of the more reserved Captain Tarvitz, readily accepted his Primarchs descent to chaos and worship of their new patron - Slannesh.

Lord Commander Eidolon has artificer armour as you would expect, and iron halo for a 4++. Eidolon also has an Archeotech pistol (which is better than nothing certainly), a master crafted Thunder Hammer, frag and krak grenades and a sonic shrieker (-1 WS to your opponent).  Eidolon also has the option of a jump pack for an additional +20 points.

Ediolon obviously has independent character as well as Legiones Astartes (EC). In addition to this he also has Master of the Legion as you might expect as the exemplar of the EC. In terms of unique special rules he has three. Warlords Pride, Thunderous Charge and Death Scream.

Warlords Pride - Eidolon is always your armies warlord unless Fulgrim is present. He then also has a set Warlord Trait:Coordinated Assault - Eidolon and all friendly units within 12" add +1 to their charge distance.

Thunderous Charge - Any turn that Eidolon charges he strikes at initiative (6 on the charge! 7 in a challenge on the charge!) despite wielding a thunder hammer!

Death Scream - Eidolon's Sonic shrieker has an in built attack that is an assault 1 template S2 but also rending, pinning and one use only. Its ok as an additional attack that might pin your opponent before you charge but at strength 2 without poisoned or fleshbane don't expect too much.

Eidolon has some fantastic rules that buff his wargear tremendously and also fit in perfectly with the fluff of the EC. His price point with his jump pack puts him at 205 points which makes him expensive but good value when used correctly. I would personally go for the jump pack option as this allows you a lot more flexibility in positioning Eidolon for the charge.

This is the key aspect of playing with Eidolon, you NEED to get the charge off to take advantage of his I6/7 thunder hammer (and therefore S8) attacks. These will ID any toughness 4 models, factoring in his 5 attacks on the charge and the -1WS from your sonic shrieker, you should expect to be doing 2/3 wounds on the charge to a character. With a 4++ as the most prevalent invulnerable you might face you SHOULD kill a low-mid level multi-wound character in a challenge on the charge.

His warlord traits also plays into getting those charges off. I would go big with Eidolon and stick him in a Palantine Blade Squad with jump packs for some serious close combat power, though I would be tempted to add a primus medicae for FNP or another independent character to tank wounds on their invulnerable.

That's all for Eidolon today, next up in this Emperor's Children review is the Primarch himself Fulgrim.

After this series of reviews I will be attempting to do the entirety of the Taghmata Omnissiah codex, though I will intersperse that with Legiones Astartes reviews as well as a new Legion review. Stick in the comments which legion you would like to see next and I'll pick the one that gets most mentions :)