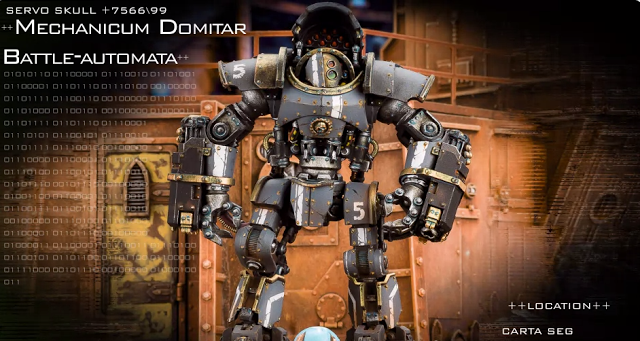 A review of the Domitar Battle-Automata which is on my mind today as I started cleaning the sprues up to build these guys last night because I wasn't in the mood to paint. Lovely models that should be very fun to put together and pose.

The Domitar is the bigger brother of the Castellax and shares much with it. It is a monstrous creature that can be taken in units of 1-5 and with a stat line to match as you an see below!

In comparison to the shooting focussed Castellax with a BS4 the Domitar is clearly intended for combat with a WS4 and a BS3 so you want to get it stuck into something as quick as possible. Additionally it also comes with Atomantic Shielding granting a 5++ versus ranged attacks and a 6++ against attacks in close combat. The Domitar also has an extra pip in strength bringing it to S7 though given its fist based armaments I'm not sure it matters all that much!

As with all battle automata poisoned fire and fleshbane will be ignoring its high toughness, BUT it has the Cybernetica Resilience special rule which forces successful poisoned or fleshbane wounds to be re-rolled. This is nice against fleshbane but HUGE against poisoned weapons with 4+ being the most common form of poison, so reducing those wound by half again on average!

Overall - The Domitar has much the same strengths as the Castellax but its has special rules and equipment that truly define it as a close combat dedicated monster as you will see below.

The Domitar has 2 very useful rules up its sleeve that truly engender it to close combat fighting. These are Crusader and Brutal Charge. Crusader is as the rulebook of course and just ensures that you have an extra level of mobility with these chaps that can not only help you get into combat but also help you sweep an opponent after you smash them (because you will).

Brutal Charge on the other hand is a Domitar specific rule that grants you D3 hammer of wrath hits on the charge rather than the usual 1. In a unit you roll once and multiple by models. Couple this with the native S7 of the Domitar and you will be wounding bike mounted space marines on a 2+ as standard, lovely!

The Domitar has two close combat weapon (the additional attack is already figured for in the profile above) so you will generate 4 attacks on the charge. This is not all that impressive with your WS4 but couple it with your D3 hammer of wrath hits then you can potentially put out a world of hurt with your Graviton Hammers.

Concussive helps ensure any T6 or eternal warrior characters you can take a wound off will be striking after you and wrecker helps you mulch down any fortifications, building or vehicles nicely. S10 is a god send here and will allow you to double out any T5 creature or lower.

Additionally the Graviton hammers force anyone that has charged you to count as making a disordered charge. This would strip away lots of bonuses beyond the additional attacks for charging such as +1 initiative in a Baal Strike Force detachment.

Finally the Domitar also has a single missile launcher mounted on there back with krak and ignis missiles. Ignis missiles are S5 AP6, small blast, ignores cover. Great against Orks but not much else!? You can however add flakk missiles for 5 points. Given you won't take many Domitars because of their near 200 point cost I would probably chuck this on for 5 points because yes.

Finally you can also upgrade the Domitar to have a search light and frag grenades. Take the frag grenades as you NEED them, to make this beast worth its points.

The Domitar on the charge will produce 1-3 S7 hammer of wrath hits and up to 4 possible S10 AP2 attacks will land. These will land at initiative 3, UNLESS you take them as part of a Legio Cybernetica Cohort (as I am) which will grant the monster I4! So striking at the same time as most miniatures and before any power fist wielding sergeants. Though it is worth remembering that they will generally hit you on 4's and still require 3's to wound you, so you still have fair survivability. Its power swords in abundance that you need to worry about as a weight of AP3 attacks WILL kill you.

The Domitar is a prime candidate for paragon of metal. This will grant the Domitar IWND for potential to return wounds and also grant rampage which as you are on your own will more often than not come into play, granting you additional attacks and damage.

However it is worth noting that for similar points you can take the Arlatax Battle Automata which is essentially a jump version of the Domitar. I will cover this beast in a separate post for you to make a comparison. The Domitar IS a good choice however, but either taken one as your paragon of metal or go big with these guys as bodyguard for a close combat Archmagos.