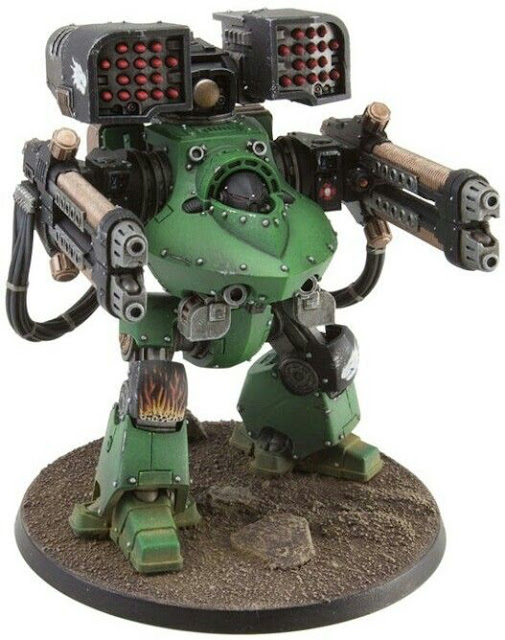 So today I am going to run through the muscled bulk that is the Deredeo Pattern Dreadnought. Muscley because its got big guns... Right?

The Deredeo comes with the followig statline:

The ballistic skill of 5 is a real boon here when you are equipped with so many guns! However 3 hull points on a 13:12:11 frame isn't exactly super robust for 185 points.

Overview - Very nicely set up for shooting but perhaps a tad frail for its cost right now.

A couple of special rules really add to the bang for your buck from this dread.

Helical Targeting Array - If the Deredeo chooses not to move then it gains interceptor and skyfire for an entire turn. Sweet indeed against a flyer heavy army. 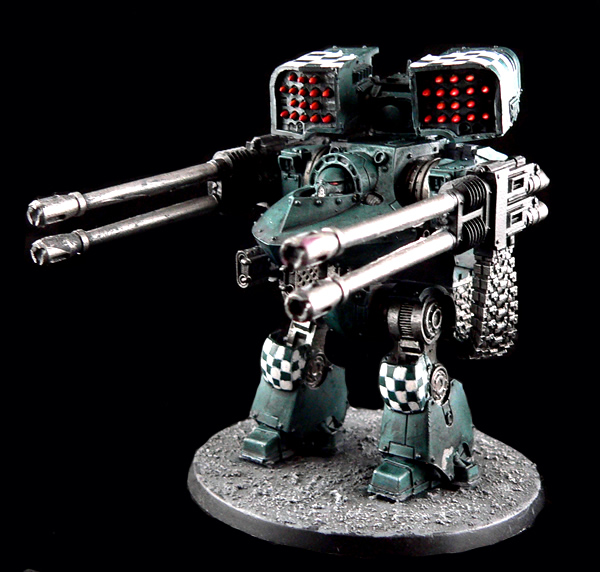 Some absolutely excellent choices are available for the Deredeo but the standard loadout is as below:

This gives you a decent amount of medium anti-tank as a basic loadout but with AP4 you can't expect too much from it beyond rate of fire. Its really designed as pretty decent long ranged anti-air, but again at AP4 you are reliant on full hull point stripping or immobilised results causing a crash and burn.

Twin linked torso mounted heavy bolters - Does what it says on the tin.

You also come with a searchlight. extra armour and smoke launchers a standard.

Overview - A decent standard loadout if you are looking for some fairly decent anti-armour/anti-flyer but not really excelling at either role.

So options! The main autocannon can be swapped with:

This has two firing profile which are sustained and maximal fire:

So you have a decrease in range and a small drop in strength compared to the autocannon but you gain AP2 and that is definitely worth it in my opinion. This makes it more difficult to get through armour with beefy flyers needing a 6 to pen but you do get the chance to explode it then. BUT you can also mince 2+ save troops now and the gets hot on maximal fire is mitigated by twin-linked I believe (not sure if the recent FAQ has rectified this?).

There is also the option to add one of two carapace mounted systems:

This adds some nice marine killing AP3 and a very long range on it. I like this upgrade. Independent tracking lets you shoot at separate targets as well.


Atomantic Pavaise - This adds +1 to the Deredeo's invulnerable to a 4++ versus shooting but has no effect in close combat. It also grants a +1 to the invulnerable save of friendly models within 3" or gives them a 6++ if not already in possession of 1. Also adds +D3" to the explosion size and is at S5.


The Deredeo can also swap its heavy bolters for heavy flamers and take armoured ceramite. 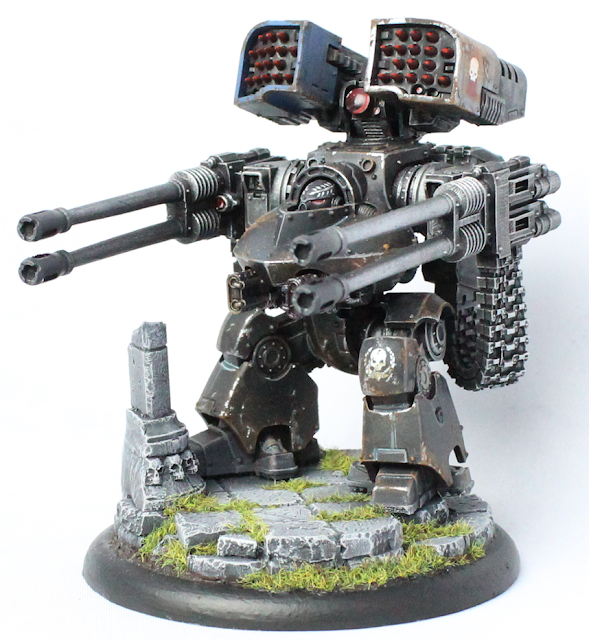 First thing to state is that if you take it stock you've got a fairly decent anti-air unit and anti-light tank as well for 185 points. The cheapest upgrade is +20 points, with the maximum number of upgrades taken totalling +105 points putting this at a staggering 290 points! So you have to be certain for why you are taking something and whether or not it is worth the cost.

If you want a backfield weapon then I would stick with the basic loadout and add either of the two carapace mounted options. The missile launcher will add some excellent additional fire that can target other units, but remember that these will also be skyfire if you want to shoot the autocannons into the sky. Alternatively if you take the Atomantic Pavaise then I would bubble wrap the Deredeo with a Devastator squad, this helps prevent the Deredeo being charged, which coupled with its now 4++ against melta should mitigate no armourec ceramite AND you now grant that squad a 6++ which is not too shabby, at all.

I feel that with the plasma cannonade you need to be more aggressive with the monster and I would take armoured ceramite and heavy flamers so coming in at just 205 points. With the large blast you can wipe out deep striking squads with your excellent BS5 and the heavy flamers should deter charges a little bit. Make sure you have a squad to back up the dread though.

Personally I'm not a fan of this model for its rules nor its aesthetic. I would rather spend the points on things which are VERY good at a particular job. The Deredeo is NOT a BAD unit at all, but I would rather take more specialised units in my opinion... But what do I know!?