The Darkness was near inviolate. The acrid chem-clouds that hung high in the sky obscured even the noon sun on Akenthon. The industri-world produced vital chemical reagents for the formulation of many of Mars’ more esoteric weapons; benign alone but combined in secret ritualistic manners became death incarnate.

The sprawling Hive Worlds distress call was a crackled Vox mess, short glitches spoke of terror and xenos, yet the space wolves of the Krakata Iron Fists with the company of the Ustroytov 182nd found nothing to indicate xenos activity. But neither did they find any life at all.

The tank column stirred the silence of the hive prime promenade, a grand expanse that led to the great shuttered Hive door. The rumble and grind of trends almost gentle in the whirling acid fumes.

Forward sentry Connovar Silverhand stalked the land; the forward line spread out moving with the feral cunning that only the emperor’s executioners possessed. The shattered columns and craters spoke of legionary warfare not foul xenos and they moved with extreme care, sensory runes flashing across visors.

Connovar’s head jolted upward! Dropping to a knee his left hand moved in a blur of astartes combat sign and a shattering silence fell as each legionary and auxilia expertly fell into place. Engines idled and the sentries took defensive position.

He smelt them before he saw them. As much an indication of the Space Wolves acute senses as it was of the poor visibility. Caudite and promethium, raw even through the filters of his helm. Retro-vectored afterburners.

Tearing across the sky, they split the clouds.

Hitting the Vox rune on his throat guard Connovar roared across the vox to the battle barge in orbit.
“Kraken’s Teeth!" - The circling Fenrisian Battle Barge,– "we have enemy contact, state your conditions”

Connovar swore a fanged oath “Waken honoured Andar! He is useless to you, we need his blooded fury!!”

The World Eaters slammed into the ground, white and blue blood mad super-human screams of blood lust rending the air in two; juxtaposed against the silent visage of the hydra that appeared from the spoil-mist; hidden even to the Wolves...

Traitors have first turn. Loyalists can seize on a 5+. (Accounts for the surprise of the traitor assault and the space wolves acute senses)

Turn 3 the side with the most kill points gains 1D3 orbital bombardments at S7 AP4 Lance Large Blast – Nuncio Vox’s can be used as line of sight. (This determines which side is winning the space faring battle)

Night fight is rolled for every turn on a 4+. Because the chem clouds constantly thicken to obscure the light of Akenthons’ star.

Loyalists loyalist gain stubborn in their own deployment zone.

Deployment was an interlocking L shape. 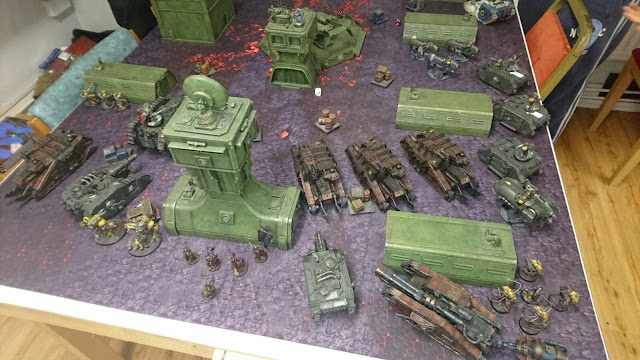 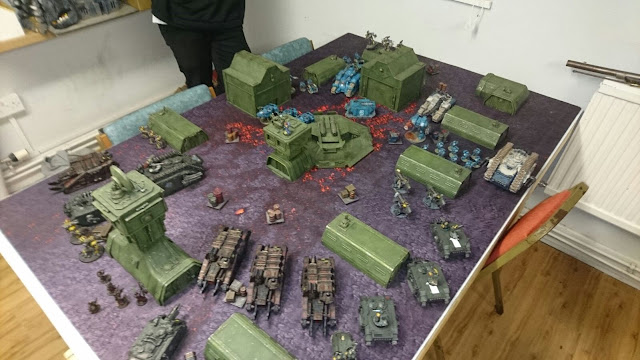 You can see from these two photos how close the lines are with this style of deployment. The interlocking L shaped deployment was pulled straight out of the Age of Sigmar General's Handbook for anyone who is interested.

The Auxilia and the Wolves presented one hell of an armoured line with 12 vehicles on the table totalling 47 hull points! Like the Alpha legion the Wolves also had a Leviathan though that was in bound in a drop pod. The World Eaters had a large 20 man squad dropping inside a Kharybdis that we would have to contend with as well.

In the far left corner of the Alpha Legion deployment they had a unit of Castellax equipped with Darkfire cannons as well to contend with. Kharn was sat in the World Eaters Spartan and he would be worth 4 points along with Armillus Dynat as the Traitors' Warlords. 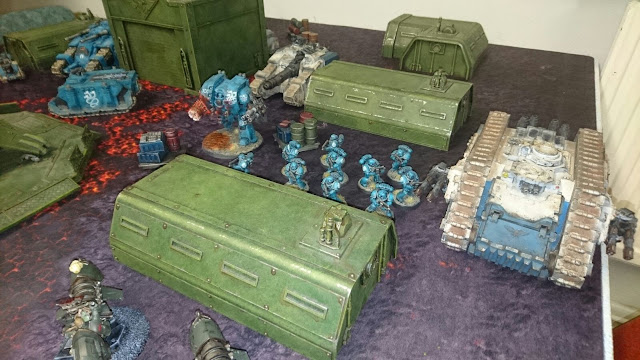 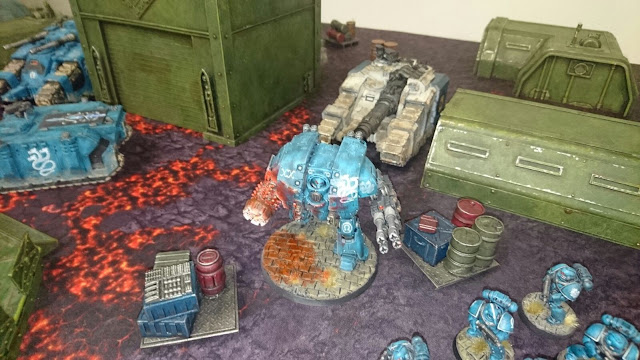 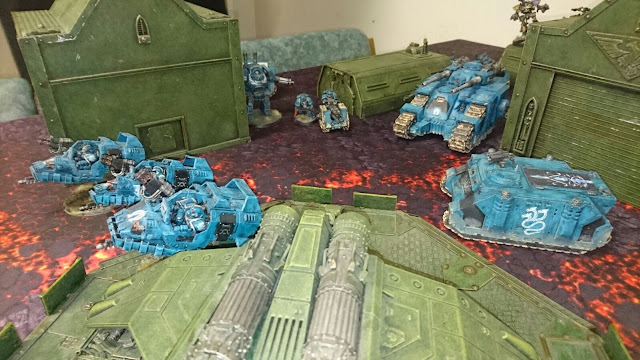 The hiding Kheres Contemptor here would prove to be quite the pain to the Wolves! 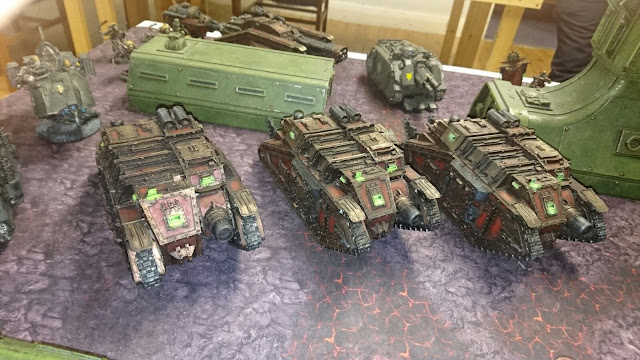 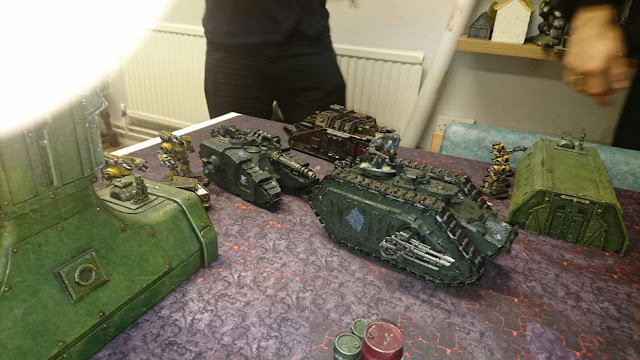 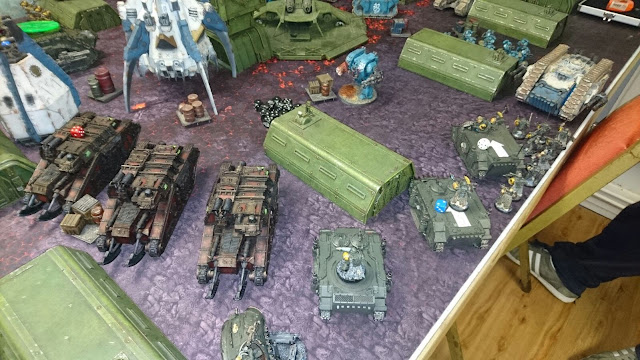 This is Turn 2 for the Traitors and you can see that the jetbikes didn't last long in such close proximity to a Leviathan! Equally the rhinos took a bit of a pounding with one wrecked and one down to a single hull point. One of the Dracosans also became immobilised which limited the ability to shift firepower around given the amount of armour on show! 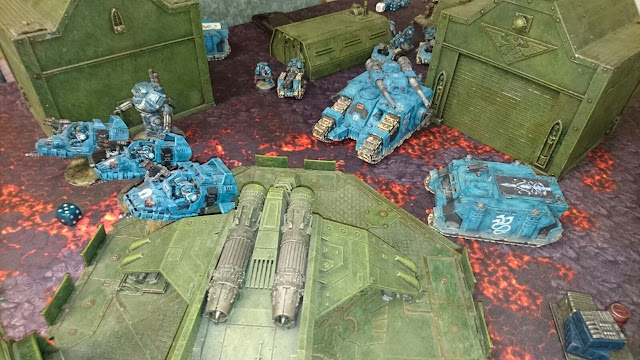 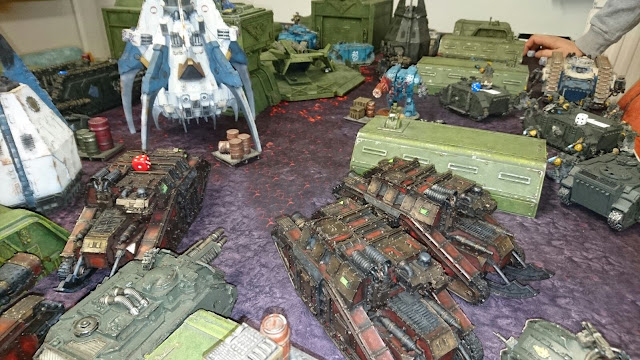 The Malcador in the bottom left pushes forward to get a bead on the distant Alpha Legion landspeeders whilst also clipping the Kharybdis and the contemptor. He was equipped with the S3 poisoned 2+ chem round BUT they are armourbane and he was a Tank Commander giving him Tank Hunter for a re-roll. 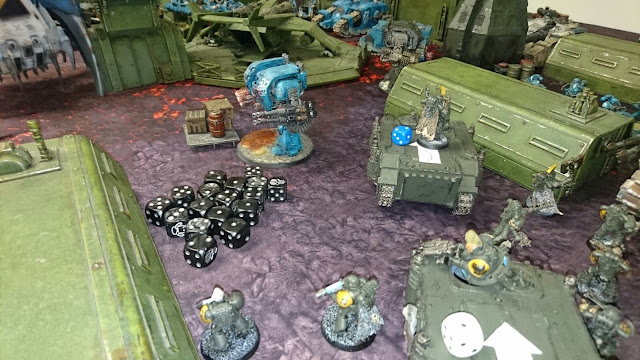 The Leviathans become as ships passing in the night.... 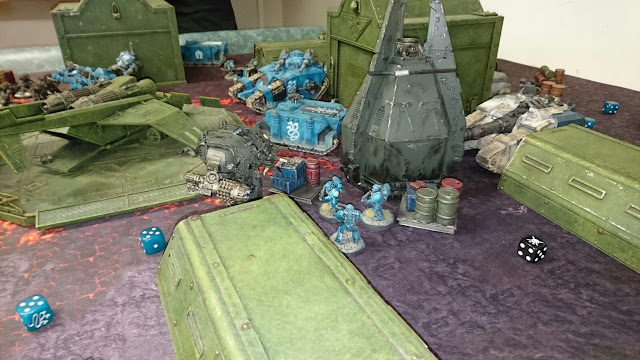 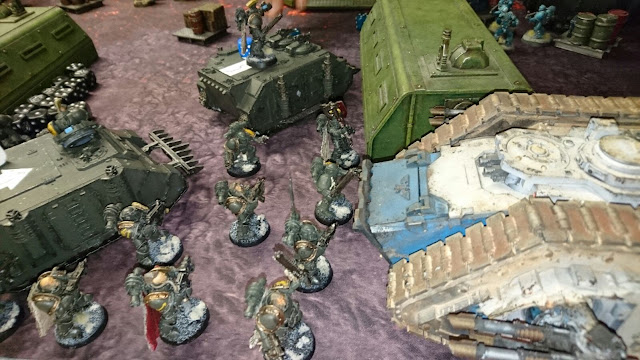 Some melta guns hem in the Spartan in an attempt to force it backwards. The World Eaters Commander was very reticent to do this in there Turn 3 (because he was being forced too!), a well played bit of Space Wolves reverse psychology against the stubborn butchers! 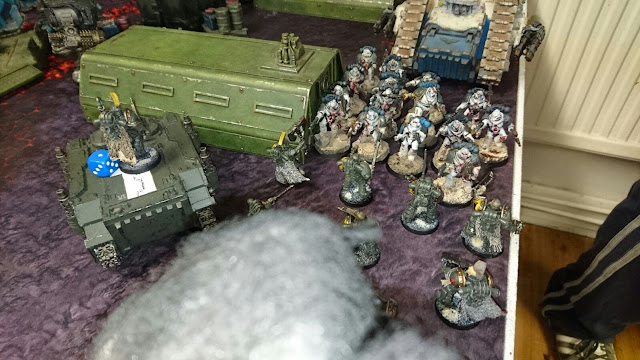 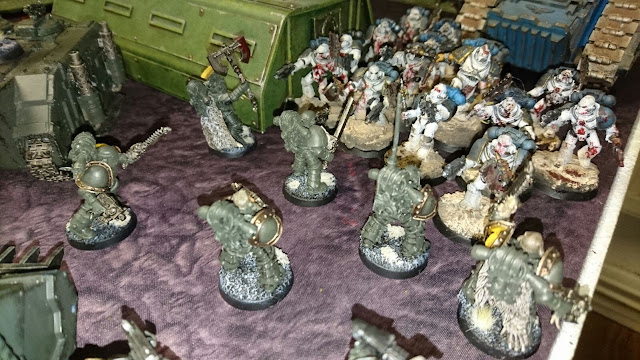 However you can see the Spartan did eventually reverse and Kharn and his unit (also accompanied by Gahlan Surlak an Apothecary character) minced the wolves with ease. 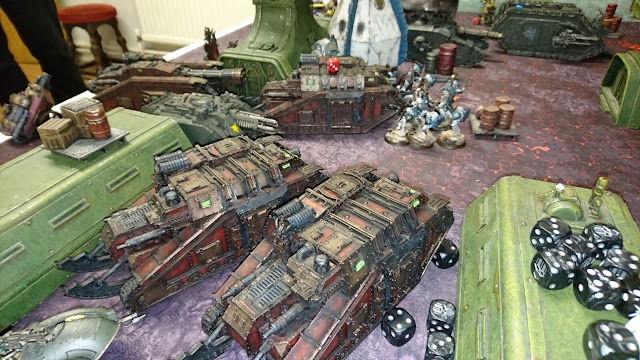 In the distance you can see the remnants of the Kharybdis squad attack the Dracosan. The Infernus managed to pen and roll a 6 with its S3 armourbane flamer against the flyer that could not jink... The remaining squad took the brunt of two demolisher shells as well as the explosion. However they made a magnificent number of saves where they had any. 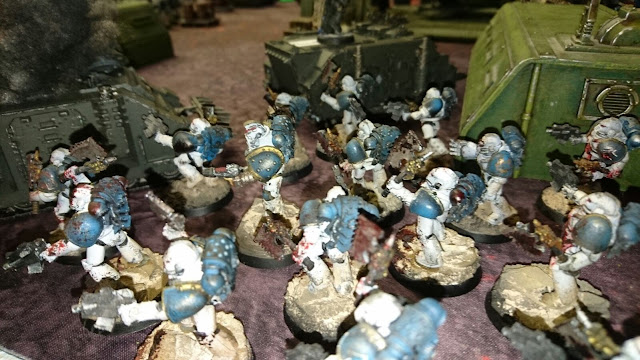 Despite being subjected to the Leviathan and the Malcador Infernus this squad would end the day with both Kharn and Surlak alive and untouched. The rest of the squad bar the sergeant however bit the dust. 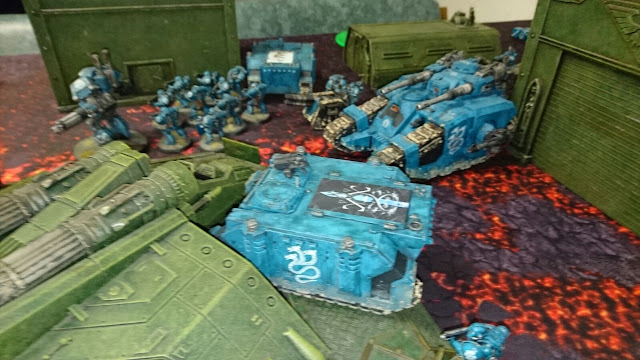 The Contemptor in the distance made good use of the landspeeders as a speed bump and the Space Wolves terminators that made it out of their Spartan to wreck all the landspeeders paid the price with a punishing rending volley of Kheres Death. The Death of the Wolves Warlord ultimately sealing a loss for the Loyalists forces. 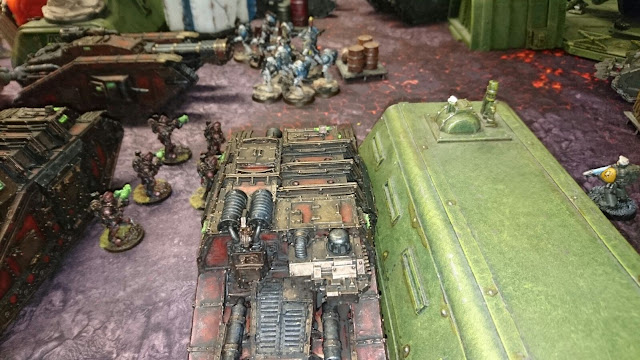 Despite multiple demolisher cannons and a weight of volkite weaponry the World Eaters would not die! 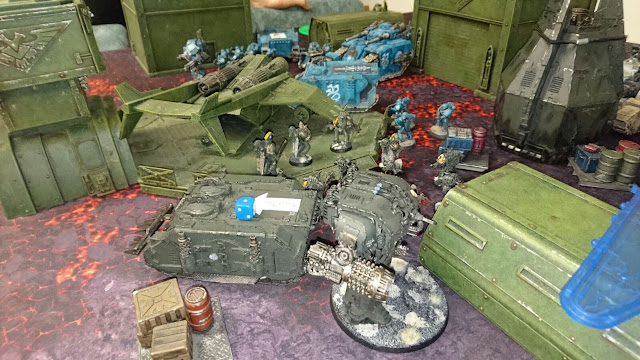 The remnants of the wolves push on deep into the enemy territory, but the loyalists simply could not cope with the onslaught of the World eaters and the brutality of the Alpha Legions sustained advance and long distance fire on the opposite flank...

The nails sung a discordant form of euphoria; sparking and crackling in the brain of the user. Always the nails; the Butchers Nails. Screaming. The Astartes appeared through the billowing chem fog residue, chest heaving with a dark gargle of blood and spit. He slowly stopped and looked to the ground, the fallen corpses of his brethren lay around him, near a full squad lay upon the blood soaked dirt, armoured ceramite broken and twisted.
Kharn looked toward the body at his feet. Agram lay there, the broad pale face surprisingly untouched by the acrid manner of death that had befallen him. But the nails, the nails sang loud and clear. Kharn screamed his fury and gorechild rose in a revving death cry; the impact into Agram’s face caused congealed blood, flesh and bone fragments to fly upwards and stain the blue and white armour of the XIIth.

“Calm yourself Kharn” Called a still voice from his rear. “You need not waste your fury”

Gahlan Surlak may have had a calm voice but it was still run through with that grating gravel tone of XIIth. Despite the cloud of poisonous chem fumes that had engulfed them Gahlan seemed completely unscathed, calmly stooping to retrieve the gene-seed of the fallen.
“Do not command me apothecary!” snarled Kharn.
The throbbing of the nails faded all of a sudden. They started their song slow, an agonizingly extended crescendo that peaked only with the shedding of blood. But when they fell silent, they became deaf with a crashing absence; and Kharn felt hollow.

“My apologies Gahlan” said Kharn with a slight incline of the head. His voice shifting from a bloody gurgled snarl to the calm clipped terran tone that had been tinted with Nucerian nuance and colloquialisms.

“Kharn - come in Kharn” crackled the vox on his collar. The rune glow decorated with encrypted code.

“This is Kharn – what is your status Dynat” came his leaden reply, a dull ferrous taste on his tongue.

“We have the wolves turning tails, howling at the moon you might say” came Dynat’s typically enigmatic reply. “We follow and hunt the hunters – I presume I can leave the humans to you?”

“Speak clearly you snake!” snapped Kharn “The humans are ours, take care of the wolves, out”.

Behind Dynat, all of the eerie shimmering astartes, even the great contemptor Honoured Alpharius, looked near translucent in the on and off again daylight of Akenthon. The shadows stretched out over their purple-green armour and only the red glow of the helmet visors remained constantly visible.

Indeed, within the shadows the Alpha Legion took on the appearance of a many headed creature, eyes always watching.
And just like that they were gone. Silent as the grave, the grave of the broken wolves whose brothers they now pursued.

This was a game I played around a month ago now, its just taken me some time to get my shit together and post it up! I hope you enjoyed the background fluff as well as how that was integrated into the rules for the game. Its a shame we didn't make it past three turns but it was excellent fun all the same!

We are intending on playing a follow on game towards the end of January so hopefully we'll see some more action in this segmentum of the galaxy :)