So much the same with my mechanicum I don't have a lot left to do with my Solar Auxilia to complete them as an army. In fact between the two armies I only have 4 units to paint! However that 4 units includes 3 super heavies! I have yet to complete the build on the Imperial Knight for my mechanicum, but the Stormblade and Malcador Infernus have been primed and ready to go for some time, and over the weekend I managed to get the most laborious part of the Malcador finished - the red basecoat. 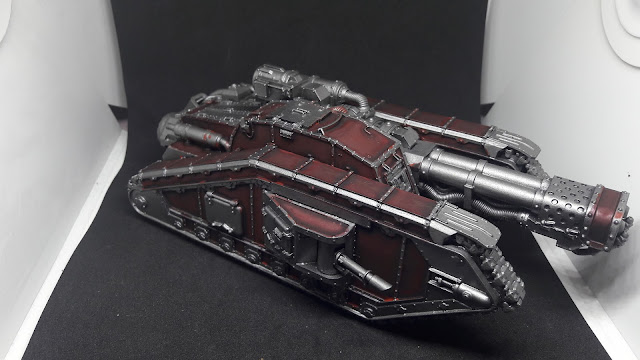 This is laborious because its achieved through a layer of bloodletter glaze followed by a layer of carrobourg crimson on top. Being as thin as they are, they respond very much to gravity, so each surface of the tank that needs the red has to be balanced flat for the glaze and allowed to completely dry before I add the crimson wash and allowed to completely dry, thus stopping pooling towards the bottom of the panels.

Lots of flipping the tank and leaving it alone, sometimes quite precariously balanced with blue tack support! Anyway, now this stage is done, when I have the time I should be able to (relatively) motor through the other base coats and finish it off. Then just the Stormblade to do which I am dreading!