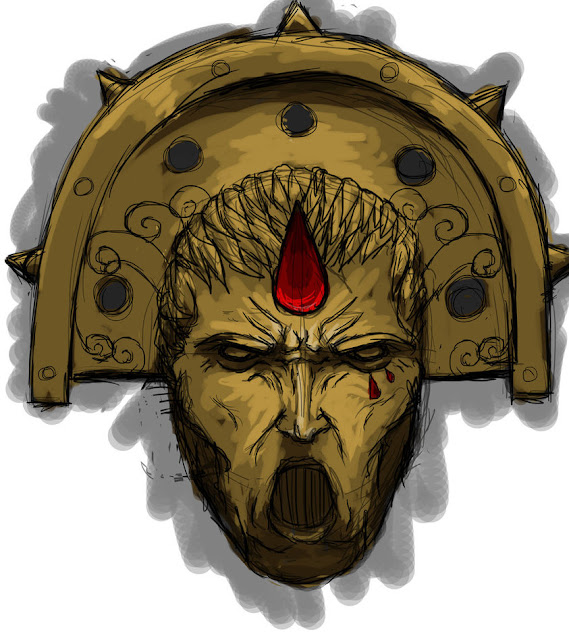 I have been reflecting tonight on how much my hobby productivity has increased in the few short months since I started blogging in April (which btw seems bloody ages ago!). It really is a motivating factor to have people help guide your hobby through advice and encouragement which makes the actual hobbying easier, particularly when sharing problems that everyone seems to come across; but also it has given me a drive to put content out there to try and entertain and inspire readers and hopefully develop a bit of a following.

In short, blogging is ace! And the community of bloggers that I have met so far, including all who comment on my blog and many whose blogs I comment on are bloody nice guys and gals to boot.

Anyhoo, today I have my first attempt at converting a Storm Cast Eternal Prosecutor (the flying ones...) into a sanguinary guard. This chap has been given the Blood Angel specific Terminator banner and a generic terminator power fist, along with a Sanguinary Guard death mask.

It was a bit of a bugger getting the pose to work so I have in the end just bent the scrolls he is floating on and it seems to have worked out. 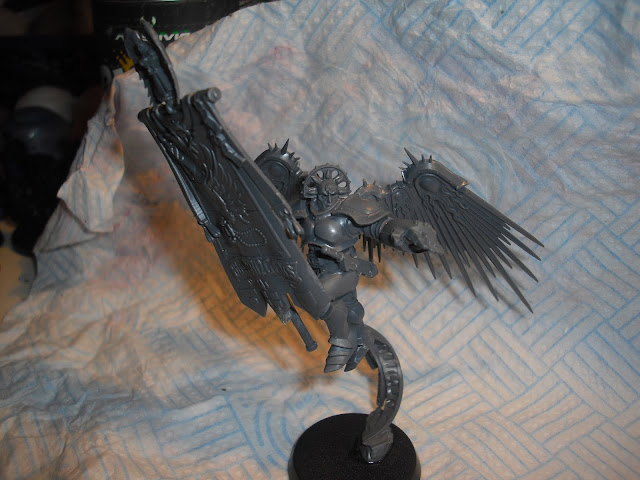 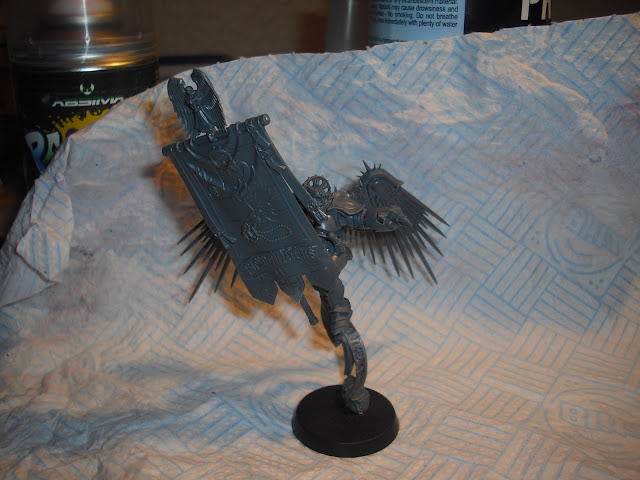 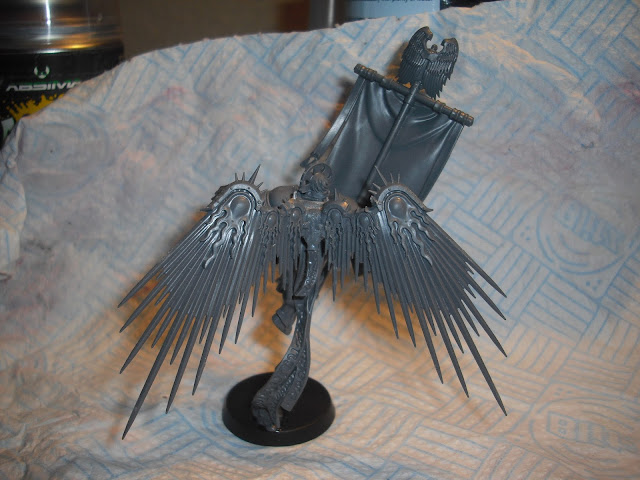 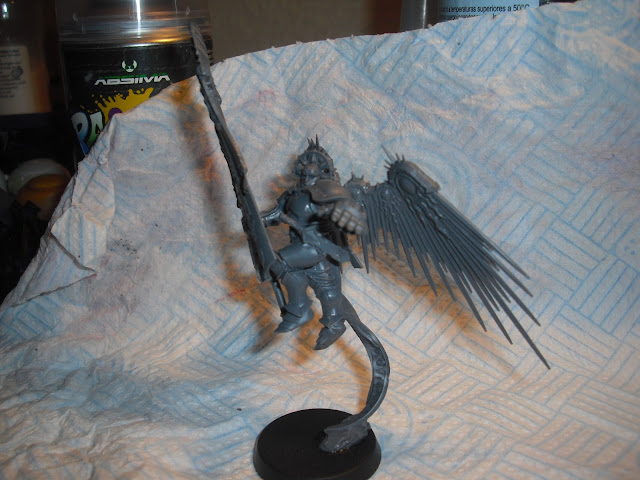 I made a few mistakes here and there and the wing were a bloody nightmare to glue together to be honest, wasn't a fan of the wee connection that joins them, but hopefully these will make the other 4 a lot less painful to put together.

I managed to remove all of the Sigmar specific makings except for the wing comet which will be painted as fireballs and a small hammer in the centre of the wings which got mangled enough from glue to not matter. Though I have an order of purity seals coming so a few of them will make it on to him and probably cover that up anyway.

In a further burst of activity tonight I have done all the basecoating for 10 Black Templar Neophytes that are now drying from a wash of Agrax as I type. 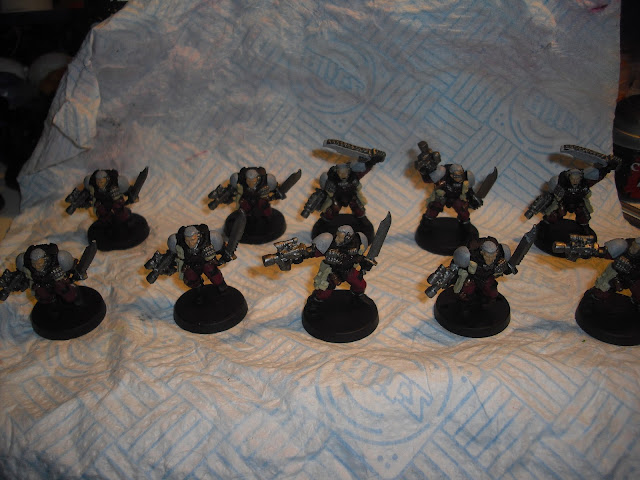 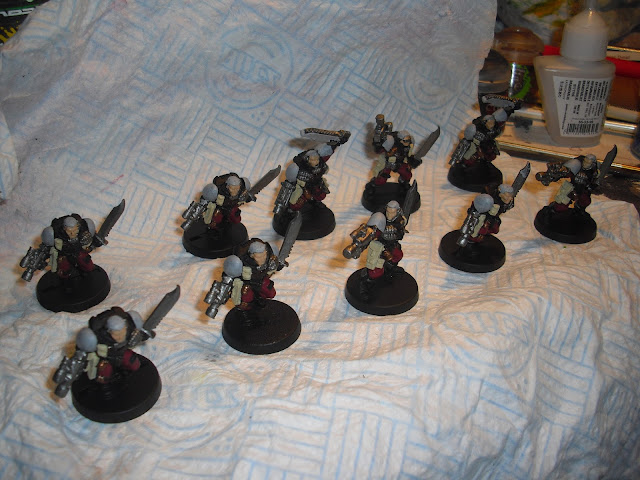 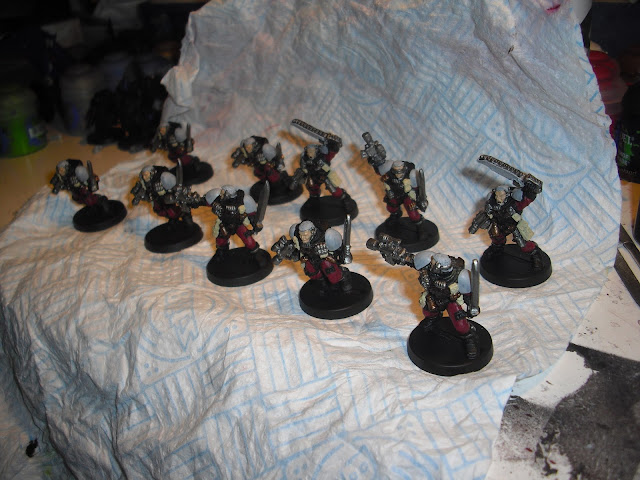 I am always surprised how much detail some of the older miniatures hold and these were no exception. The only bit to not be washed with agrax will be the hair which will get a nuln oil wash as it will be painted as white hair eventually.

I'm hoping to get these done by Sunday night and based ready for a game with them next week!

After these fine fellows are painted I will have 10 more to do and then 5 Vanguard Veterans and Grimaldus before all of my Black Templars are done!

I have no plans to buy anymore until at least one of my Blood Angels armies is complete.... Or I may start another army ahem...