This is the first half of my narrative game I had last Thursday. This comprised of two games running side by side but staggered for effect. The game which started first was a modified Kill team where we just used individual models and normal 40K rules to avoid anything too complicated as neither of us had experience with kill team and we were a bit time constrained to try something fully new out.

The game in the Tunnels would provide the winner (Last man standing) the opportunity to set off a large blast on the other table and give his army a boon in the fight above ground. This would be strength 9 AP2 large blast so potential for some serious havoc. BUT it would scatter twice and we were only playing on a 4 foot square board so hazardous!

The game in the tunnels was played using a special board the club has that we made up to 2 by 4 feet and the beginning deployment of our forces was as follows: 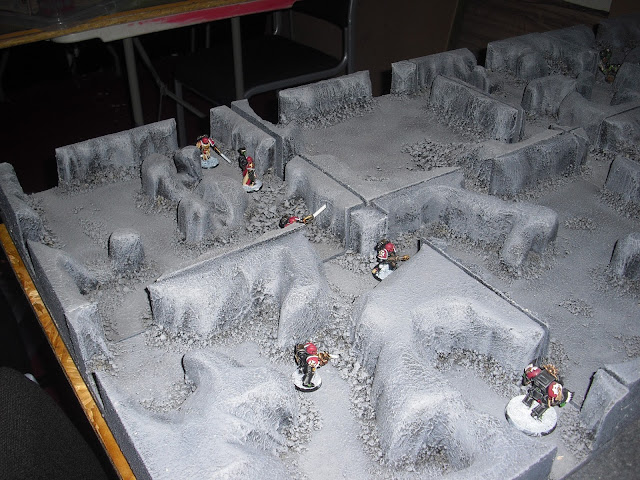 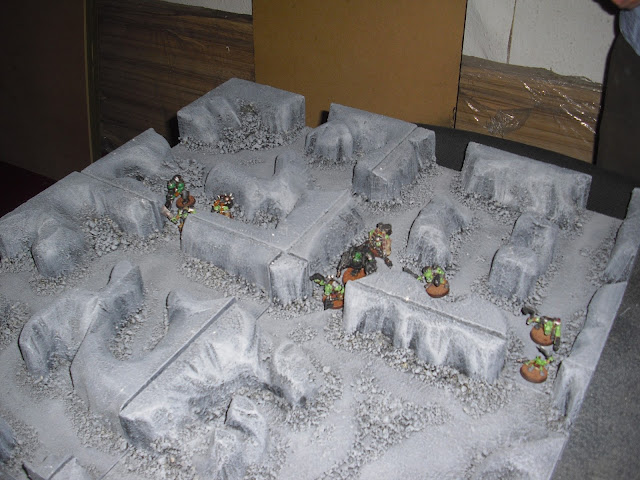 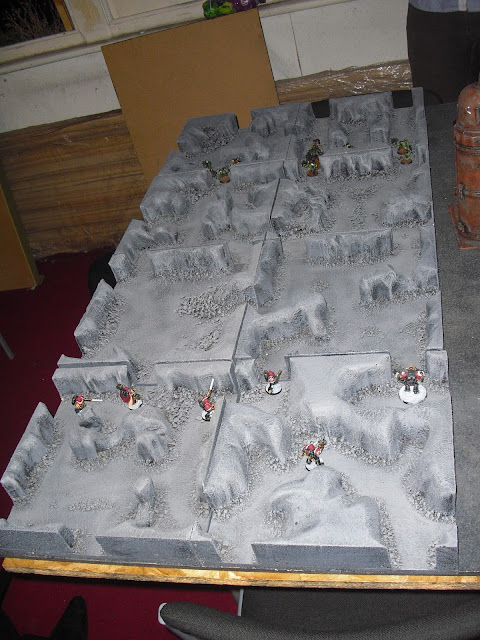 A really cool board! nice and modular with plenty of interesting hidey holes. We had a plethora of flamers between us, but I was numerically outnumbered and I didn't have any AP2 weaponry compared to his meganobz power klaw. Yikes!!! Lets see how we got on... 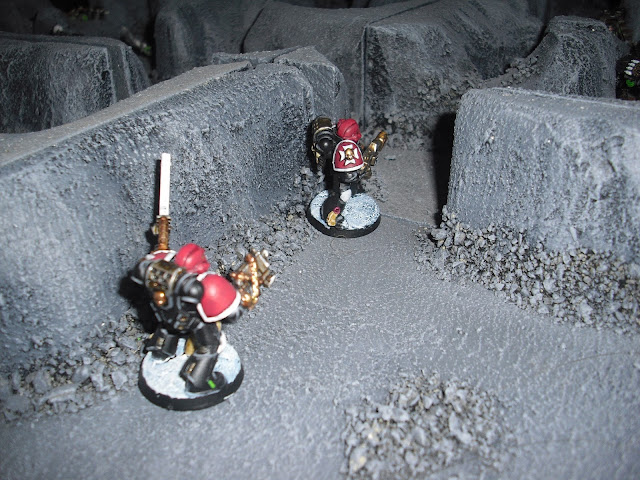 The first couple of turns consisted with both of us running headlong at each other with little thought other than getting stuck in and getting down and dirty! A few ranged attacks came to nought. 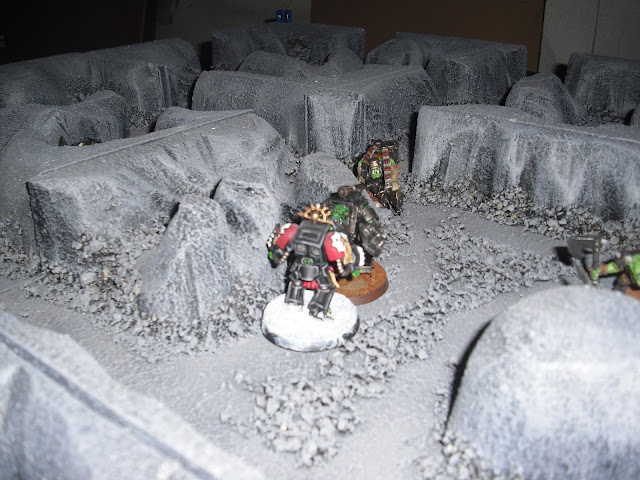 The prize fight between my Terminator Sergeant and his Meganob began in earnest! 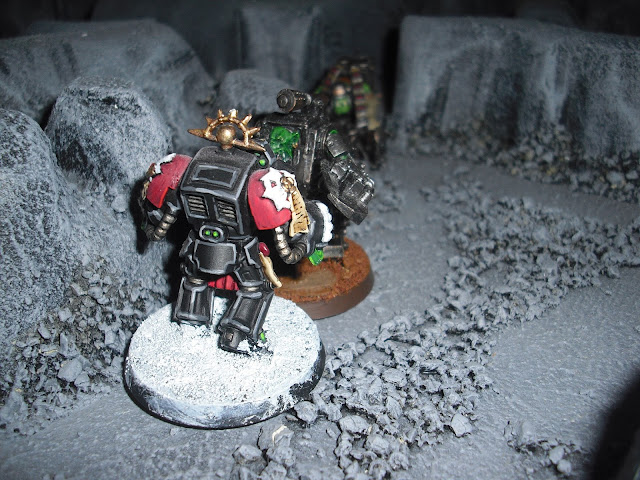 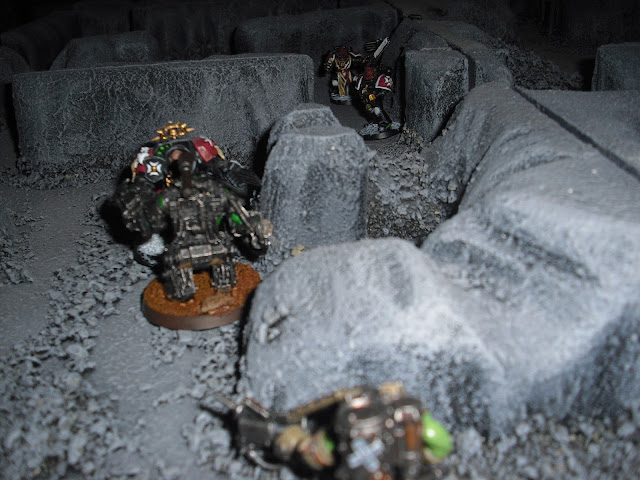 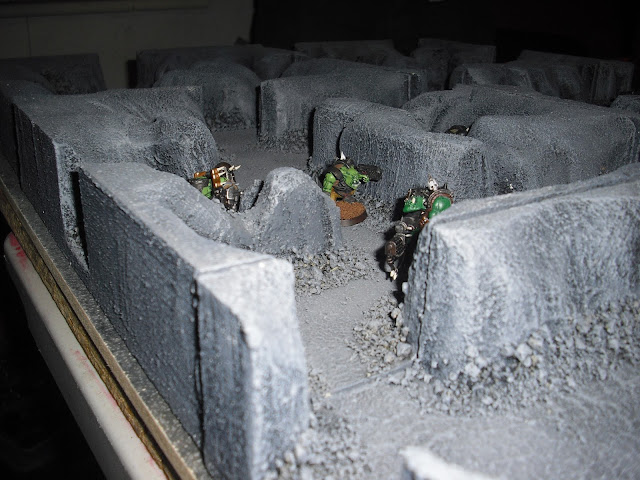 The Orks advance cautiously with a flamer taking cover and burning a Crusader to crisp! My inability to pass a 3+ save would become something of a theme through both games... Its worth nothing that we house ruled that the wall of flame would only do 1 hit if you charged a flamer. 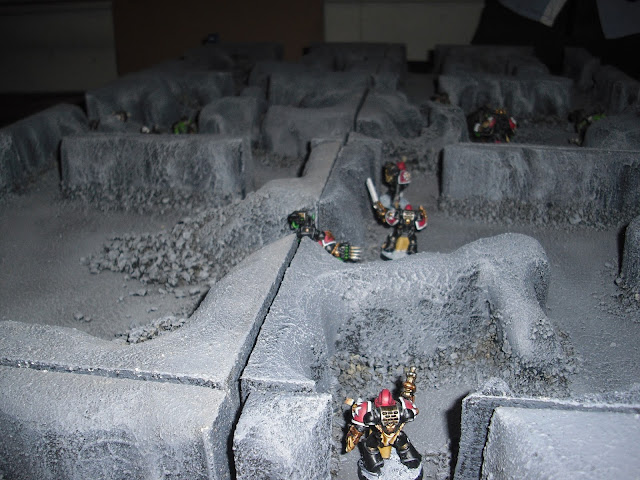 After seeing his subordinate become a charred lump of flesh the sword brother with twin lightning claws make a tactical withdrawal to the other side of the map to support the right flank and over run the Orks! 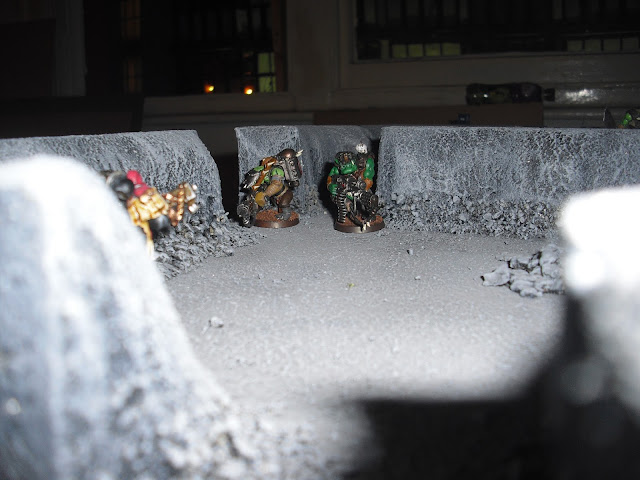 The sole crusader of the left flank is left to face two Burna Boyz! 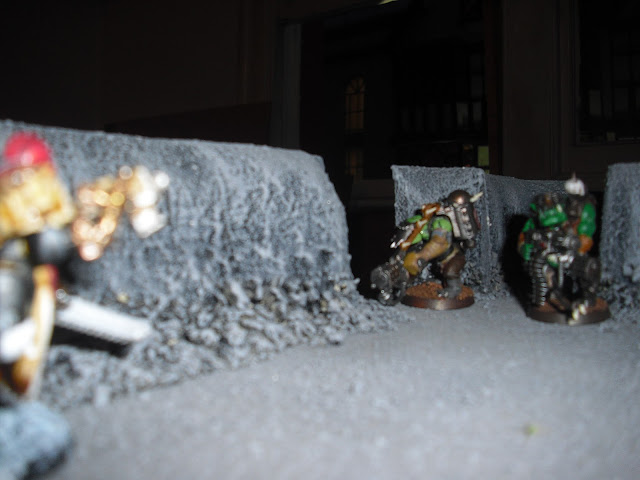 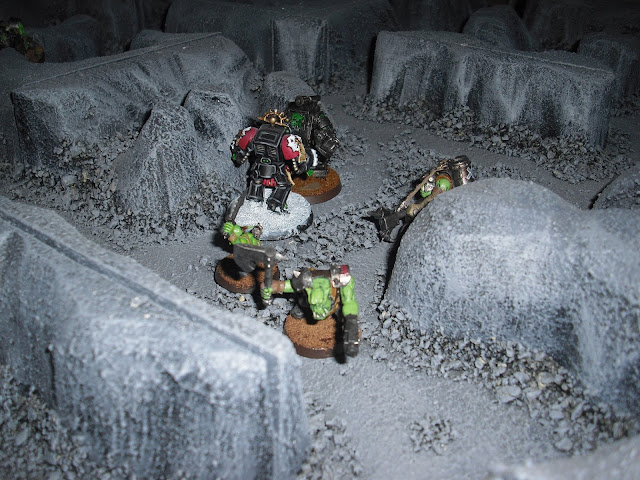 In a moment of shame, the flamer wielding crusader is taken down by a shot from a grot! I can only imagine a ricochet bounced around the cavern before plunging into the marines flame canister setting him ablaze! 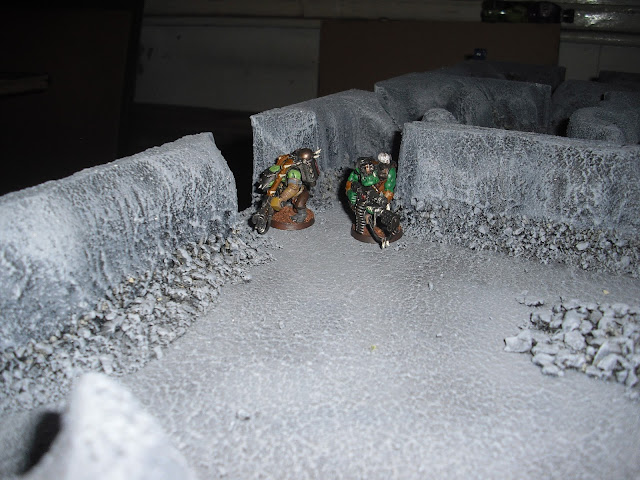 The left flank is now cleared by the burna boyz after a dramatic charge from the crusader ends in death... 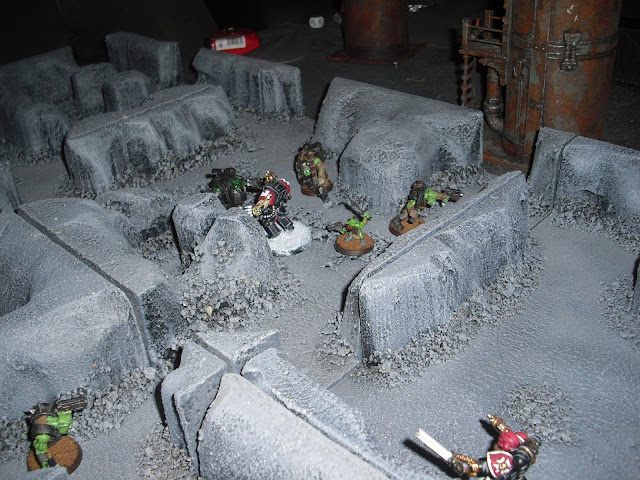 One Ork boy is taken down by bolt pistol fire but I have only a crusader, the terminator sergeant and the Sword Brother left and he has almost all his Orky buggers marauding through the tunnels! 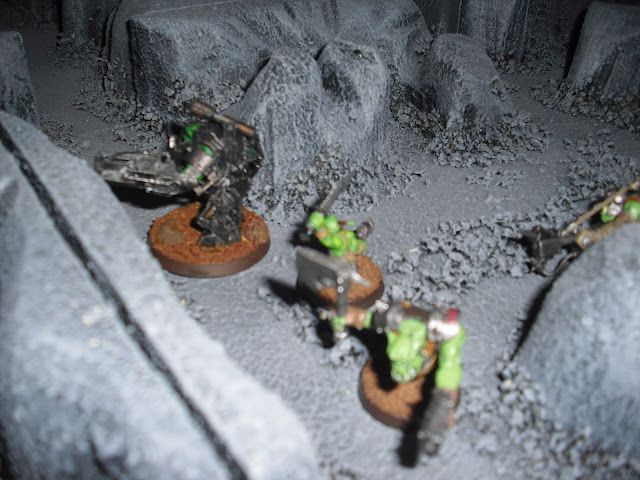 After 3 turns of the Meganob passing all his 2+ saves and being unable to land a blow, he finally rips the Sergeant limb from limb in frenzy of gore and saliva. The grot gets a second lucky shot and takes down the final crusader! 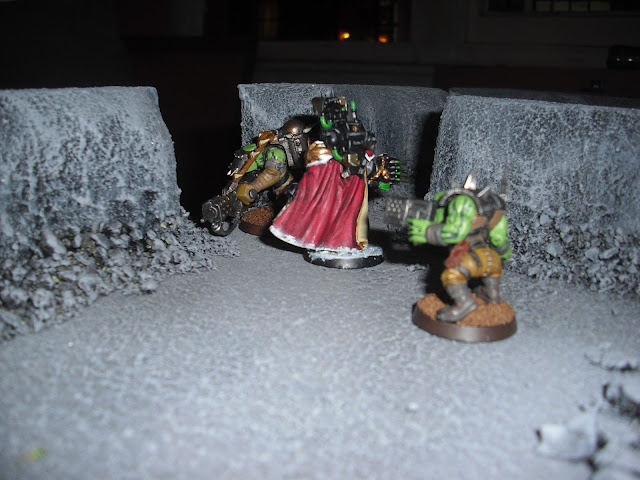 The sword brother, pursued by a boy, charges into a burna boy and takes him down in style! 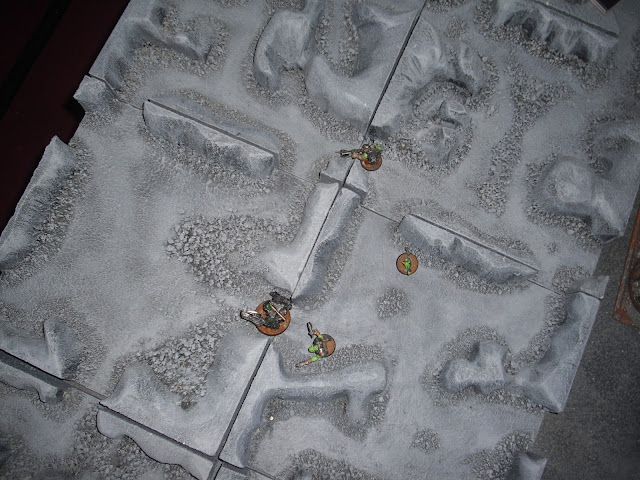 In the next turn, the sword brother charged by the final burna boy and normal boy slaughters them both. But alas to no avail as the Meganobz shooter punches through his armour from the back and the Orks stand triumphant in the tunnels. 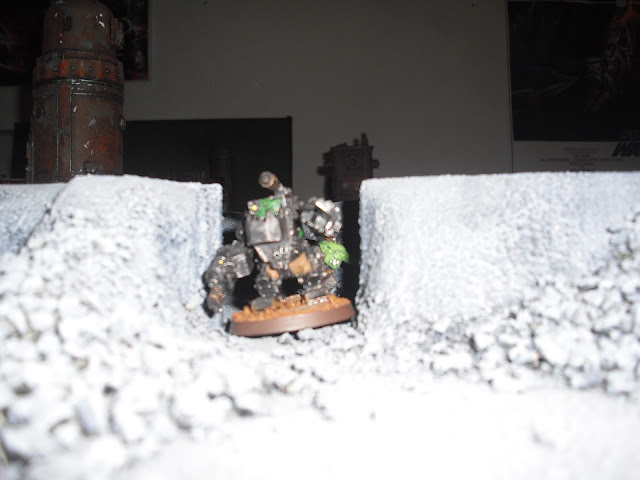 The menacing Meganob stands imposing in the tunnels halls as the begin to converge on a site to set of their bomb. Will it turn the tide of the battle above? Or will the battle already be won or lost for the greenskins?

I had an absolute blast with this little game and it was really a case of the odds going against me that turned the tide, I didn't pass a single 3+ save up until the Sword brother was in combat and the meganob passed about 6 2+ saves so he could have failed at least one!

It was nice and cinematic though and it was fun to fighting to have an effect on the battle on the other table which could really turn the tide with a good scatter (or no scatter rather!).

I hope you enjoyed this first half and turn in to see how the battle above ground went as the Black Templar forces attempt to defend a comms relay as they signal for help to surrounding imperial space to prevent this Ork incursion from becoming the end of this planet.