Today I am going to review the dreaded Spartan Assault Tank. I have faced off against these beasts many times and they are a devil to deal with, and that is before they have disgorged their contents! Incredibly resilient and ruthless in their delivery. Lets have a look see.

The Spartan is a land raider that has an armour and laser fetish... and weighs in at 295 points basic.

A whopping transport capacity of 25 models!! Obviously also an assault vehicle with 3 access points on the front and both sides making up the 3.

Overview - A resilient 5HP coupled with AV14 all round makes this a fearsome beast even before you throw any options on to it. And then you also have to contend with whatever sits in its belly...

Very few special rules to speak of, with Assault Vehicle already mentioned above.

Machine Spirit - Like the land raiders of 40k you have the aiding machine spirit to let you target a couple of units with your prodigious guns.

Overview - Not much to say here so lets move on to the enticing and exciting equipment section! 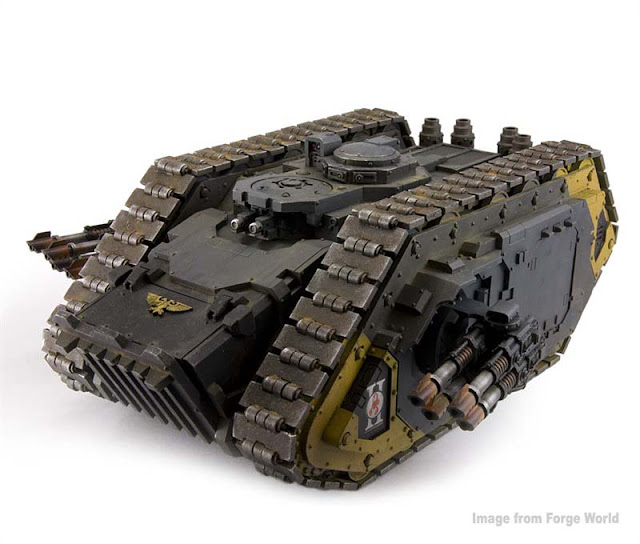 As standard the Spartan comes with the following:

With two of these pumping out 4 twin-linked lascannon shots the Spartan is a piece of armour that is very effective at taking out armour, the twin-linked nature of the shots gives you a decent spread of hits nearly every turn.

Overview - For your basic Spartan to pump out 4 x S9 AP2 shots and 3 x S5 AP4 shots ALL twin-linked is pretty brilliant, especially when you consider that this is in many ways secondary to its utility as a delivery vehicle. 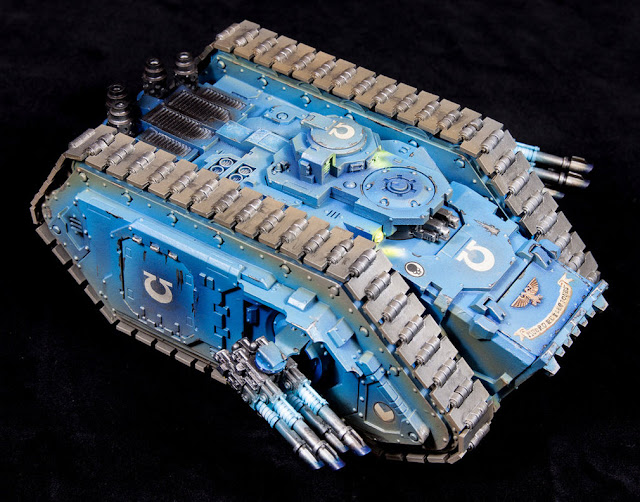 This is an option that you can swap your quad lascannons for with no additional points cost. You are giving up TWO S9 AP2 shots for a bump in AP to AP1 as well as the ability to roll two dice for armour penetration and take the highest. So you have an increased chance of both penning and blowing up a tank at the cost of both range and rate of fire.

Honestly I don't know if this would be worth it or not. I greatly suspect that this will be a meta dependent answer and depend on how much serious armour you face. As its free though, you can magnetise the options and it won't effect the overall price of the Spartan to field either or.


Hull mounted twin-linked heavy flamer - you can swap out the heavy bolter for this though I don't see any reason you would personally, the extra range on the heavy bolter is generally speaking going to let it be more effective.

You can also buy a pintle mounted weapon from a twin linked bolter, combi weapon, heavy flamer, havoc launcher, heavy bolter or a multi-melta. Unless you have the points to spare I don't really see the utility of adding extra weapons onto the spartan. You already have 3 weapons and the ability to fire one at another target. If you add weapons that match the heavy bolter for strength then you are going to be firing one of those weapons at tanks or on of the sponsons at infantry.

You could take a multi melta that can also target the same unit as the sponsons but the sponsons will outrange it by some way initially. I'd leave the pintle off personally. Hunter killer missile can also be taken and I would leave off for the same sort of reason, save those points for elsewhere.

Frag launchers cost you an extra 10 points. Take them as needed for the guys inside.

Flare Shield - The shield we love to hate! -1 strength to incoming shooting attacks in the front arc, -2 if a blast or template weapon. This increases the durability of the Spartan hugely, an absolutely worthwhile upgrade though not necessarily a must take.

Armoured Ceramite - prevents the additional D6 of damage caused by melta shots, though melta bombs are unaffected. Also very good at increasing durability. I would argue that you SHOULD take either the flare shield or armoured ceramite. If you can take both that is great. It all depends on how much you want to protect that payload...

Dozer Blade - standard re-roll of dangerous terrain, I would skip as for an extra 5 points you can get the auxiliary drive.

Auxiliary Drive - repairs an immobilised result on a 4+ though the hull points remains dropped. 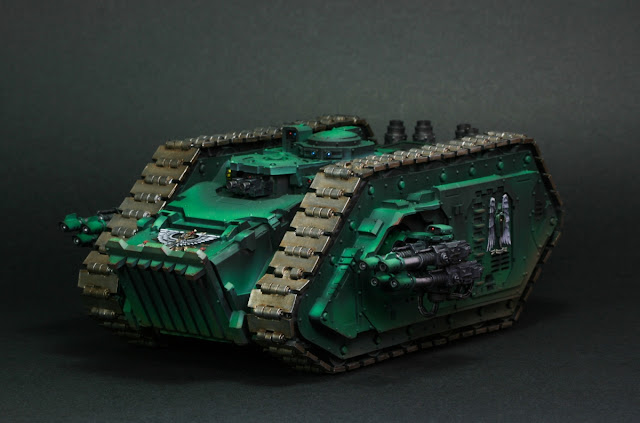 The Spartan is on of the simpler vehicles to utilise in the 31st millennium with a pretty much point and shoot playstyle. The games I have played where the Spartan has been ineffective has been games where they were played quite conservatively. The aim of a Spartan is to deliver a unit into the heart of the enemy, yes it costs 300+ points BUT don't be precious about it, it has a job to do and that will put it in harms way.

Ramming it into your opponents centre line and disgorging a 10-25 man unit of close combat beast will however make up for losing it next turn (thats if they can get past its armoured ceramite or flare shield!!!). If it does survive you now have an excellent mobile gun platform that can if needed pick units up and ferry them where they need to go.

Overall - These are popular for a reason. But there isn't any point taking them if you don't have an appropriate unit to deliver, so you have to make sure that the Spartan is going to be the best points investment for your army and your play style. But tooled up these things are very very hard to kill. With front facing lascannon shots only glancing them on a 6 if there is a flare shield equipped and no melta bonus with armoured ceramite. I have found assault the only dependable way to really bring these things down, and then you have to deal with the unit inside if it hasn't already alighted!