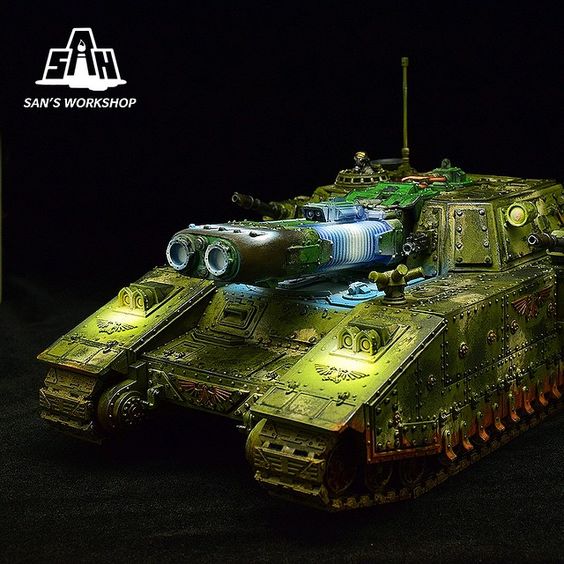 As you can see taken from San's Workshop

Today I'm going to go through one of the Lord of War choices for the Legiones Astartes that HAS NOT been changed in the recent rules update in the Crusade red book. So all the info is up to date and applicable. The Stormblade is obviously a variant of the Baneblade chassis that can be taken by the Legiones proper. Lets have a look see.

A monstrous 9 hull points for 455 points base is certainly nothing to be sniffed at. The standard BS3 with non-astartes crew is sub-par but doesn't actually matter too much if you go light on the upgrades I feel.

First of all, having the option of two firing modes is always a tactical boon that allows you to double down on a more relevant firing mode if need be. The range is ridiculously good, so only cover is going to be a saving grace for most models. S10 is perfect for doubling out those 2 wound T5 terminators you might encounter and the extra shot with the rapid format will do well against T4 and lower.

Primary weapon will be granting you 2D6 on damage rolls as well remember. This is one of the best Sub-D weapons you can get on a large chassis for my money.

You also have searchlights, smoke launchers, and a heavy bolter mounted on the hull for a little extra firepower.

Overall the Plasma Blast Gun is devilish both in the size of its blast but also the ability to increase the blast size at the expense of firing rate. The good thing about blast weapons as well is that you have a fair chance to hit directly regardless of BS as well. 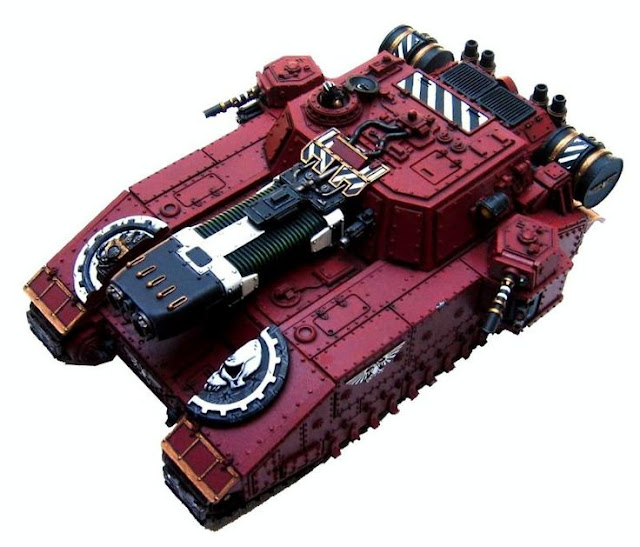 Offensively the Stormblade can really go crazy if you are so inclined.

For +50 points you can equip the Stormblade with a PAIR of sponsons. Each single sponson has a twin-linked heavy bolter and a lascannon, that can target separately from other vehicle weapons remember, being a super heavy. You can take TWO pairs of sponsons, so 4 in total. Though that'll cost you 100 points. The heavy bolters can be swapped for heavy flamers - not recommended as you should be hanging relatively far back with this and be ready for close encounters with distraction units.

Armoured Ceramite. Yep for the price of 20 points you can melta-proof your big daddy tank to increase its survivability even more. Highly recommended as always!

Finally you have the option to upgrade your tank to a command tank for +25 points and also give it a Space Marine crew for +15 points. The space marine crew gives you a simple +1 BS. If you are going heavy on extra guns then I would take this to make the most of them, if however, you are leaving the Stormblade stock for cheapness then I would happily cut this cost if you needed the points elsewhere. On such large blast template where you only affect the scatter by 1" its not the end of the world.

The command tank will cast out a 24" bubble around the tank that lets you re-roll failed morale checks. This could be invaluable as you aren't ATSKNF in 30k, but if you don't want to sit back by the tank then maybe give it a miss. 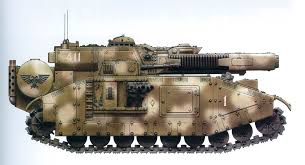 How much you upgrade the Stormblade will largely define how you play with. Upgrading the tank fully will make it such a heavy points investment that you then necessarily need to protect it as such. This means guarding against drop pod offensive armies and the like with careful deployment and the use of units as rear guard protection. The tank does well hanging back with its vast range so it would make sense to leave units around it that have equally competent range.

Heavy weapons like lascannons will do well here. Though remember that any force landing nearby will of course have to take the brunt of the retaliation from not only the defending squads but also the independently targeting sponsons as well. Another option, especially as they have dropped in cost, is to leave a 20 man tactical squad stood by the tank to offer both cover and the potential to fury of the legion any squads that get close enough.

I think I would go easy on the upgrades myself, with armoured ceramite being the only MUST take. If I was feeling fruity with spare points then the space marine crew would be next as a minimal points investment that gives a relatively big return. Then I would use the tank aggressively to make sure I have line of sight to the choicest targets each turn, and dissuade or inhibit the enemy from damaging the tanks by selectively engaging threats closest too OR the ones best at long range firepower.

Overall the Stormblade is an excellent points investment that marries large blasts with high strength, fire output AND primary weapon. Compare this to the Volcano cannons single shot S:D 5" blast and you are taking the stormblade to make sure you hit and you hit twice!