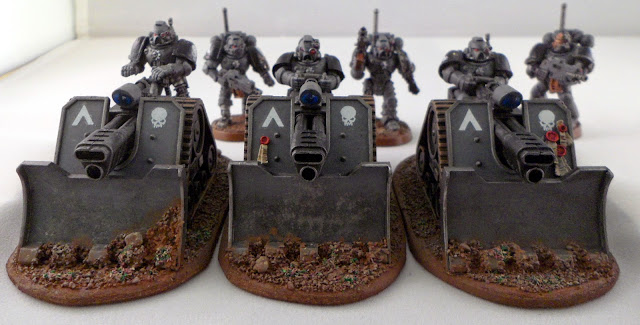 
Today I'm going to go through one of the Legiones Astartes option in 30k that doesn't really have an equivalent in 40k - The Legion Rapier Battery. I say really because there is the thunderfire cannon, but that unit does have much reduced options compared to their age old brothers. The Rapier can do a real number on your opponent, particularly if you make sure to complement the rest of your army efficiently. So onwards...

The Rapier is an artillery piece that comes with two space marine crew and follows all the basic rules for artillery found in the 40k rulebook. They clock in at 40 points per model and can be taken in units of up to 3.

Overview: The Rapier comes with all the standard artillery concepts that I would imagine most people reading this will be used to. This essentially boils down to the fact that you want to position your legiones crew in such a way that they sandwich the Rapier. Because as soon as you lose your crew or your artillery then its out of the game. Careful placement is key and remembering that the T7 will go a long way to aiding your durability. 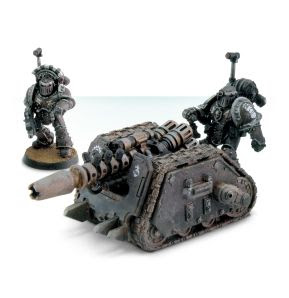 There are a couple of special rules that have little effect in game usually but for posterity here they are:

Legiones Astartes (Crew): Can regroup normally despite casualties - situational usually, only comes into play when you have squads of 3 of these really.

Extremely Bulky: As it says, not sure how you would transport these anyway, most people will be plonking them on the battlefield so has no real effect for most of us.

The Crew for the Rapier comes with bolt pistol and grenades as standard. The Rapier on the other hand comes with:

I understand the quad heavy bolter, but I think it has  limited efficacy in 30k. Against 4+ save Solar Auxilia and Mechanicum then it will do a tasty number with its high output; but this IS the Horus Heresy and the majority of your opponents will be Space Marines with a 3+. For a TAC list I would almost certainly upgrade these to one of its options.... speaking of which... 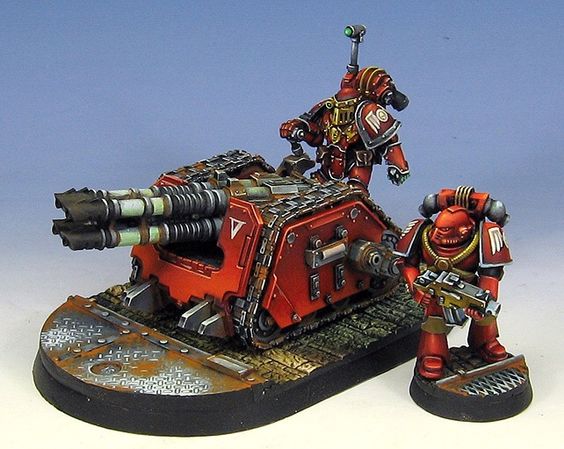 The Rapier comes with 3 possible options for the weapons system and all have their place:

Your standard Tank Destroyer coming it at +15 points a model. 55 points for a twin-linked lascannon that can roll 2D6 and pick the highest for armour pen is not to be sniffed at on a T7 frame. Masses of these will be lethal, but only if you use them correctly in your army. With this option I would be inclined to take 2 x squads of 3 personally making them tough to take out with distance between.

The Thud gun is very rightly one of the more popular builds coming at +20 points a model. The option for multiple firing modes is always a boon on any weapon. The Shatter shells will do an excellent number on light to mid vehicles, especially when in squads of 3 - pumping out 12 x S8 Sunder shots - tasty.

The Frag option is perhaps more understated but no less deadly, purely for its ability to negate 2+ cover saves through barrage and Shell Shock causes a -1 leadership the pinning test made which is also tasty. This is particularly deadly firing into multiple floored ruins.

The Graviton cannon is not 40k Grav. It does still wound differently, but in 30k this is a strength test. This is obviously less effective against even space marines, who only fail 1/3 of the time. However the Graviton Pulse rules means that the large blast is left in place and then become both difficult and dangerous terrain for the next turn.

This weapon is most effect against squadrons of vehicles or jetbikes, or even big blob squads. Providing a relatively easy way to slow them down. The Graviton cannon comes at a premium price point of +35 points a model. With that cost it isn't hard to see why the Thud gun is the most popular option of the 4 available to the Rapier. 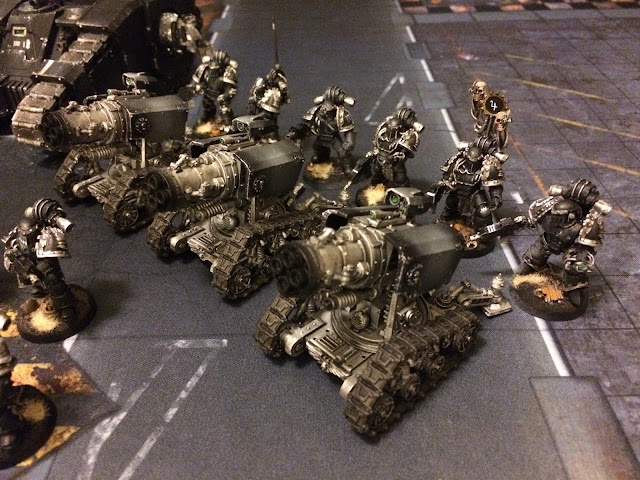 I'm not going to expound too much here as I think I have covered utilisation fairly well in the options sections of this review. I will however say that I really do think you need to take them in a squad of 3 or a couple of squads of 2 as a MINIMUM to get any decent effective unit. I regularly face off against a single thud gun and it does bugger all most games in all honestly (It helps when he remembers to fire it....You know who you are...).

At Double Trouble, Dave Weston and myself faced a list with 3 x Thud guns and they were a brutal long ranged threat with 12 barrage shots pummelling us.

My final thought relates to the Graviton Cannon. Whilst seeming a bit of a tricky customer to use at first glance, after much musing I think that it would be a fantastic addition to any SERIOUS close combat orientated army. The ability to slow your opponent down and increase the chance of you getting the charge off could be invaluable. This is more so with a Legion like the Emperor's Children as they have so many charge dependent bonuses. A thought anyway.