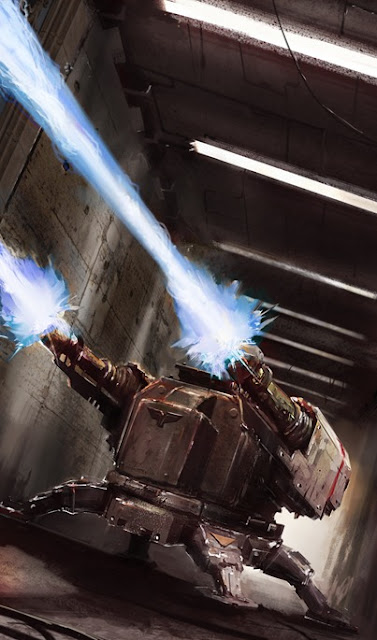 Today I'm going to go through the Tarantula Sentry Battery, and interesting option for the Legions that could cathc your opponent of guard if utilised well I feel.

The Tarantula is essentially an artillery piece that doesn't have a crew accompanying it, with the following profile.

Overview: The Tarantula is designed to be deployed independent of the legionaries and therefore act as a remote sentry, as it names suggest. You lose a pip in toughness compared to more standard artillery pieces but its still decently tough.

There are a couple of special rules that are crucial to understand so that you can get the best out of these buggers.

Firing Mode: You have to select the firing  mode of the sentry turrets at the start of the game, this cannot be changed during the game. Your two options are:

Point Defence Mode: Fires in a fixed 90 degree arc with a range of 36"

Automated Artillery: This rules relates to the targeted enemy units by the sentry. The weapon load out of the tarantula turrets will define what their preferred targets are. This is summarised below:

Lascannon/Multi-melta: Will target the nearest vehicle or monstrous creature

Two things that are explicitly stated are that in the case of the lascannon and multi-melta, it will still target an immobilised vehicle if it is the closest to the turret in its arc of fire. It also states that if you have mixed turret load outs; e.g. heavy bolter and lascannon, then they will target their respective preferred targets. Effectively granting split fire.

If preferred targets are not in range then you will just shoot the closest  enemy unit. 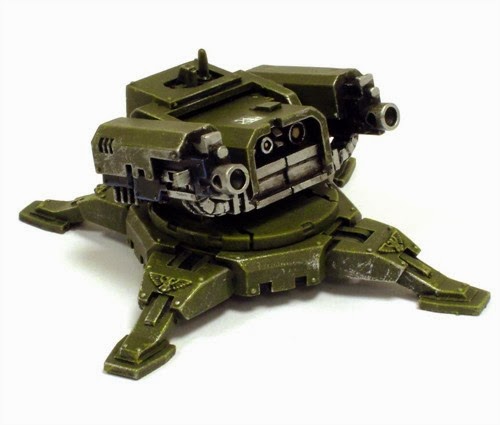 The standard load out of the tarantula:

As you might already have guessed, you get quite the choice of options for the Tarantula...

The Tarantula comes with several possible options for the weapons system and all have their place:

The above options you can mix and match in the unit. But you also have the option to switch out the entire units armaments for Hyperios Air Defence Missile Launchers:

Heat Seeker: Allows re-roll to hit and to pen

Additionally you can switch one of the Missile Launchers for a Hyperios Command Platform that grants the unit Split-fire. This is automatically engaged with no need for a Ld test.

Finally you also have the option of giving each unit of guns a single upgrade:

Forward Deployment: The unit has the scout special rule.

Concealment: The unit has the shrouded special rule until it first fires, then it loses it. 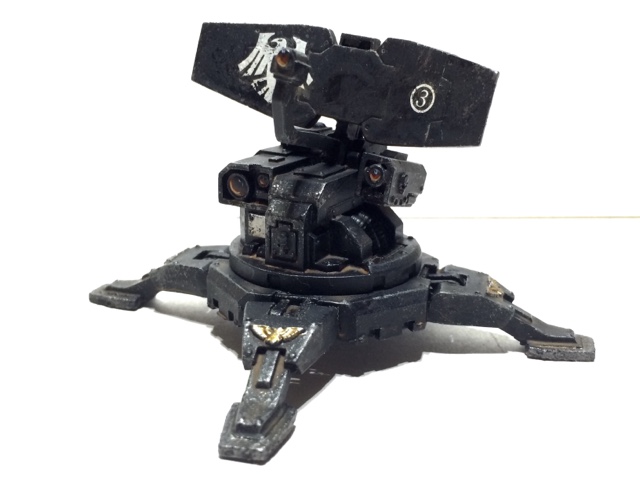 How you equip the tarantula will depend very much on what you are lacking in your army and also what your local meta is like. If you are lacking ranged anti-tank and face lots of vehicles then obviously lascannons are a good way to go.

The important thing to employ here is the firing mode mechanism and where you deploy your turrets. I think granting them scout is an excellent investment as it forces your opponent to second guess where the eventual position of the turrets will be.

Used correctly in conjunction with the available table terrain, you can use the turrets to funnel your opponents forces away from these lines of fire and this should condense the army into smaller firing lanes, or it will allow you to engage them in close combat with you getting the charge off as you have dictated the area of engagement.

Obviously you cannot rely on your opponent following this rationale so always have a back up plans should they either take your turrets out or just choose to weather the firing line.