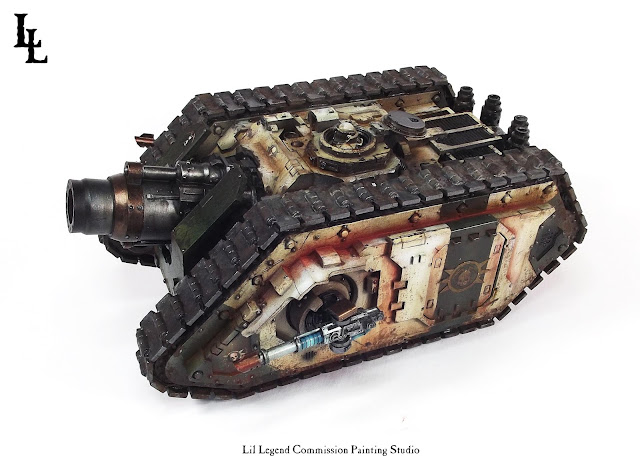 Today I delve in to the Lord of War Section of the legiones astartes and cover the Typhon Heavy Siege Tank. Brother to the Cerberus Destroyer that I have covered previously. Where the Destroyer is a master of focused laser power, the Typhon drops shells of death and destruction that can give anyone a headache and a very very bad day...


The Typhon rocks an unholy stats profile of:

A super-heavy vehicle with all the benefits that entails coupled with AV14 all round, it is going to take a supreme amount of dedicated firepower or close combat punching to take this monster down. And you are going to want to...

Overview - No more needs to be said. Begin fearing it...

Crushing weight - Add +1 to rolls on the Thunderblitz Table during a tank shock or ram move.

The Typhon comes with one important piece of equipment called the DREADHAMMER SIEGE CANNON!!

OK wow. Read that and cry tears of joy if you are fielding one, or bitter salty tears if you are facing one. No Cover Saves Allowed. A S10, 7" blast that ignores cover, rolls two dice for armour pen due to primary weapon and its AP1.

This will ruin any cover save dependent armies day, particularly if it relies heavily on aggression backed up by jinking! If they Typhon moves the range is only 24" but that is somewhat mitigated by the super heavy move of 12", effectively making it a 36" range. If it remains stationary you get the full 48" wallop.

Unlike the Cerberus the Typhon DOES NOT come with a flare shield so you are a little more susceptible to lascannon fire or better. You do come with searchlights and smoke launchers as standard though. Yay!

Overall the Typhon takes anything tightly packed down very well. Be that bunched vehicles or blobs of marines. Very important to keep your Alpha units out of line of sight. On a sparsely terrain populated board this vehicle will be disgusting. 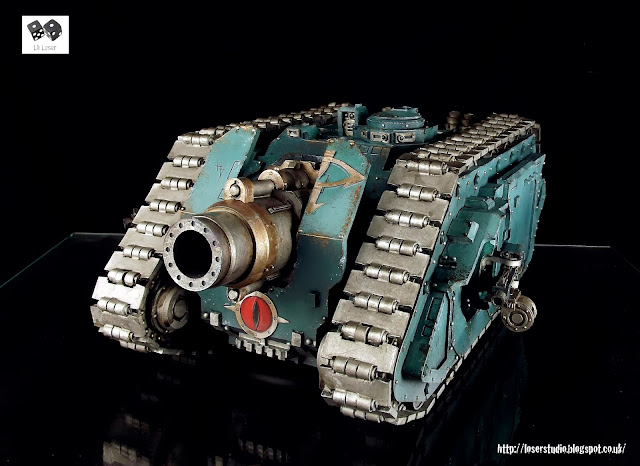 Offensively the Typhon can take a pair of sponsons that are either Heavy Bolters or Lascannons. The lacannons are the only real choice here for me, but they do add 40 points. You also have the option of pintle mounting a twin-linked bolter, combi-weapon, heavy flamer, heavy bolter or multi-melta. I'd probably save the points to give it sponsons and one other upgrade...

Armoured Ceramite. Yep for the price of 20 points you can melta-proof your big daddy tank to increase its survivability even more. Highly recommended! You can also take hunter killer missiles, but like the pintle mounted weapons I'd leave it off. 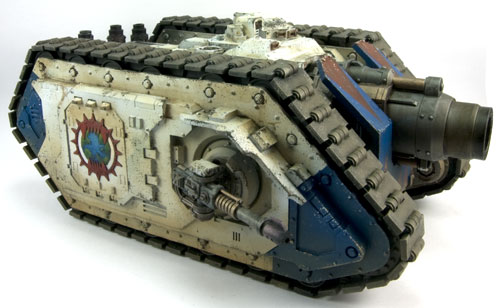 With Lascannons and armoured ceramite you are forking out 410 points! Or 370 if you just take the ceramite. This is a huge investment for something that at the end of the day does only have 6HP. but they will be oh so hard to take from it.

I think it is very easy to be overly confident with this beast and put yourself in harms way unnecessarily. Don't be so cock sure with it that it can take whatever your opponent can throw at it.

Don't be afraid to hide it a bit (as much as you can anyway). As with a 12" move you should be able to get key targets in that 24" range. From a tactical perspective I would pair this in an army with some long range firepower like lascannons. This will mean that if your opponent stays back you can batter their front lines with the Typhon and back lines (like a hiding scorpius or Knight) with the lascannons.

This forces your opponents hand and keeps them honest with multiple threats at range. An unpleasant prospect to deal with, particularly with anything T5 or below.

Overall the Typhon should do you proud and it really does force your opponent to make deployment decisions right from the get go, keeping squads spaced out as well ad deployed further back and out of line of sight. Coupled with long range fire power (lascannons, any decent barrage weapon) you can really capitalise on this. But don't be cocky!