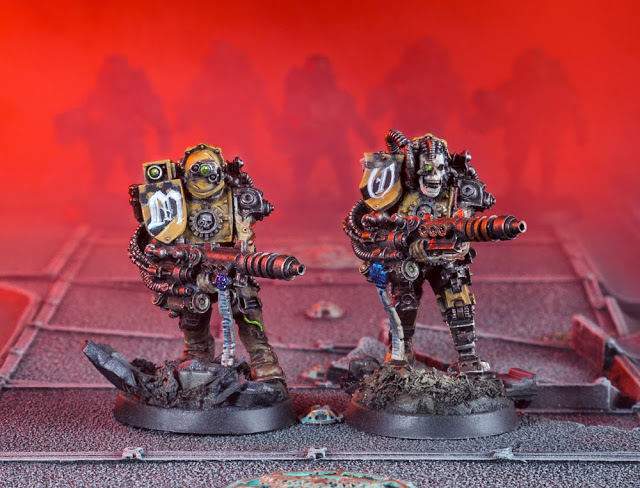 All credit to the esteemed Henry South


Today I return to the fold of the Taghmata Omnissiah briefly. The Adsecularis Covenant are conscious, memory bearing human subjects that have been cybernetically enhanced and overrun to form a tech thrall. These are above servitors in the hierarchy as their flesh is more than just a component part of a none-thinking machine/flesh hybrid, but to become a member of the Adsecularis Covenant is the fate of any citizen of a Forgeworld deemed to transgress against the will and law of the machine god.

As you  might expect for such a low ranking and penal servitude unit they have stats that are basic at best.

There is one special rule as standard with the Covenant:

Feel No Pain (6+): Handy for any strength 5 or lower weaponry just to negate a couple of wounds but not groundbreaking.

Standard weaponry of the Covenant is a Laslock:

35 points for 10 x S4 shots is nothing to be sniffed at! They do also come with a close combat weapon as well as their flak armour for the 5+ save in their profile. 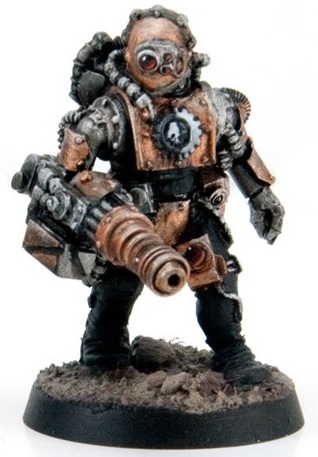 Adescularis Covenant have a surprising amount of upgrades available to them which makes them pretty customisable. Firstly you can upgrade the unit to have 10 more models at 3 points a pop, so 65 points for 20! This makes a massively cheap blob squad that you can repeat up to 6 times for 390 points for 120!! You can also give them a Triaros Conveyer as a dedicated transport but don't.

On the offensive front you have two different weapon upgrades with Mitralocks being the first:

This greatly increase the ability of your Covenant to wound the enemy but at massively reduced range. If you play your covenant aggressively then this may work for you, but as a general rule of thumb I would leave them be.

The second offensive upgrade is heavy chainblades. +1 strength as I recall (though it may be +2 now I think about it) and two-handed these can work very well on a squad of 20 just by sheer volume of attacks. Costing 20 points for the squad its not going to break your wallet either. I've never seen this build played but I think it would be worth a punt.

Finally the squad has the choice to take any of the following upgrade:

Frag Grenades - Does what it says on the tin - 5 points

Carapace Armour - a 4+ save for 20 points is brilliant and recommended.

Rite of Pure Thought - Burning out the emotion centres of the thralls gives them fearless but they may no longer overwatch or make sweeping advances. This works incredibly well with chainblades or frag grenades and carapace armour on a 20 man squad to produce the mother of all tar pits! 15 points.

The Adescularis Covenant are a brilliant blob squad that scores and tarpits in equal measure when set up correctly. A squad of 20 thralls with carapace armour and the rite of pure thought gives you a fearless, scoring squad that can tarpit low attack units very effectively and put out OK firepower. This will cost you a vast 100 points. 120 fearless thralls with a 4+ save and a 6+ FNP will cost you 600 points and fill your troop slot. This is not a bad decision!!

120 points would allow you to give a squad chainblades, at this point you would have to use them more aggressively to get the best out of them it must be said. Consider adding tech-priests from the elite slot or even a magos from the HQ slot to give the unit more punch as well as protect that character.