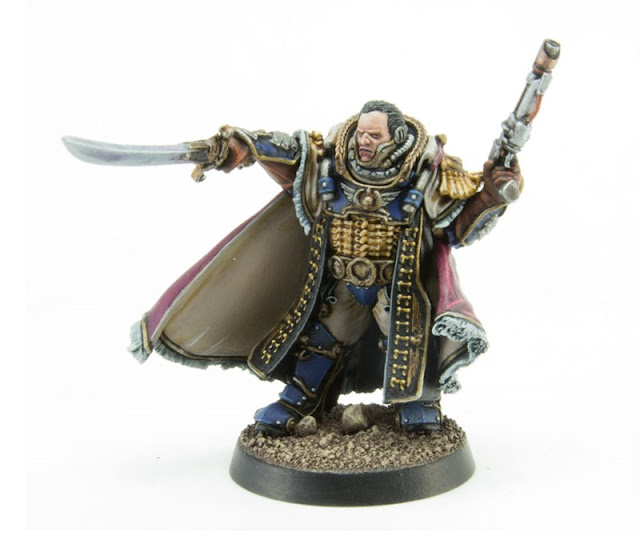 As usual, my inclination to review units from the wide pool of horus heresy units is often dictated by my current painting interests. At the moment I am feverishly (somewhat literally due to illness) painting my Solar Auxilia, so Solar Auxilia reviews ye shall receive! Today is the turn of the Legate Commander and his upgrade the Lord Marshal, the generals of the army, along with his trusty household retinue whom I will explain below...

The legate commander is your high ranking field officer that takes control of your human elite. They have a bunch of great rules and wargear to use and abuse... First, Stats!

So the Legate commander is your basic choice at 45 points. The Lord Marshal upgrade will nearly double that as a 35 points upgrade, which so far only give you a pip in I, A, and Ld. BUT the Lord Marshal grants you access to several rules and wargear that make it worth it if you want to go down that route. Clue, I do.

The basic equipment of both the Legate and Lord are the same and are as follows:

So far so not inspiring. Lets have a gander at their special rules before we peruse the many many options you can give these two. 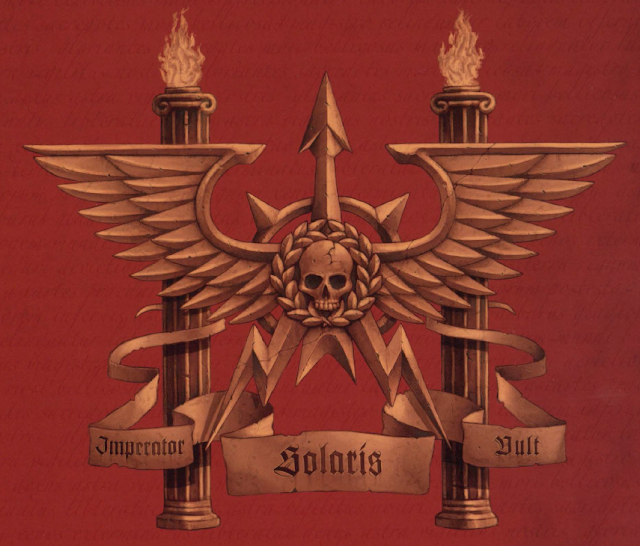 First I will detail the rules that both the Legate and Lord share:

Disciplined Fire - May overwatch at BS2 with pistol, assault and rapid fire weapons

High Command - Grants their leadership for morale and pinning tests to the entire force as long as they are on the table (in ground vehicle and fortifications counts) and not falling back or engaged in assault.

Disciplined Command - Defines who has to be the warlord with ranks going from Lord, Legate, Strategos, Tank commander

Forged in War - The Lord Marshall may select their warlord trait from ANY table they are eligible for. So all of the rulebook tables as well as the Auxilia traits.

Household Retinue - The Lord Marshall may take a Veletaris Storm Section as an Elite choice that gains WS4! They lose hold the line as a special rule BUT they gain preferred enemy (infantry) while the Lord is alive and on the table and not falling back. They may take a Dracosan or Arvus lighter as a transport.

So their is a veritable bucket of upgrades for these two esteemed leaders. I'm not going to run through every option but give you the low down on the best options and then in my summary I will proffer a couple of builds that represent high and low points investment in this category.

Artificer Armour - A 2+ armour save that is a must take for both HQ options.

Iron Halo/Cyber Familiar - The iron Halo grants a 4++ invulnerable and the cyber familiar can improve this to 3++ though this is still on a 3 wound toughness 3 squishable bugger.

Displacer field (Lord only) - This is a 3++ invulnerable that on the roll of a 1 immediately places your warlord in deep strike reserve. If they mishap when they re-enter play in your next turn they die immediately. Given that you can pin point precision deep strike with nuncio-voxs this is effectively a 2++ invulnerable statistically. It is only 15 points and a must take if you are going full Lord in my opinion.

Grav-Wave Generator (Lord Only) - Any charges made against the bearer suffer a D3" penalty (cumulative with the -2" for terrain) and cannot make hammer of wrath attacks. This is perfect for helping ensure you are the charger not the chargee! 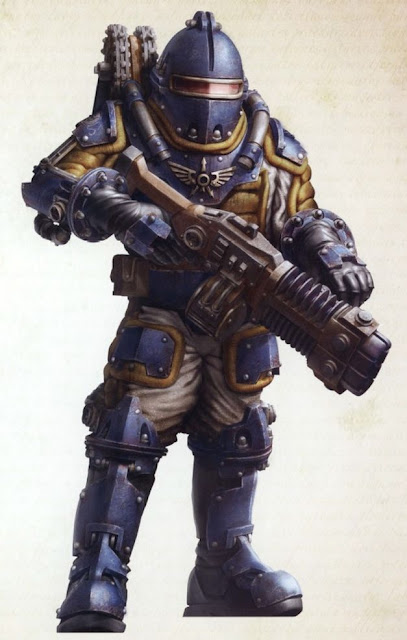 Digital Lasers - A cheap method of giving you an extra attack

Needle Pistol - A 12" pistol with 4+ poison and rending (AP5 normally) - not a bad option at all and cheap.

Power Fist - The standard S6 weapon of humans to have at least a wee chance of hurting marines. But you will strike last and stand to get smushed first!

Charnabal Sabre - +1 initiative in challenges and rending. This puts your legate commander up to I4 meaning they have a decent chance of striking against squad sergeants at least.

Paragon Blade (Lord Marshal Only) - we know it we love it and that instant death on a 6 will help your puny Lord make a dent.

Archaeotech Pistols (Lord Marshal Only) - AP3 pistol to help plink of marines where you can.

As I insinuated before there are broadly two paths you can go down with this HQ choice. The first is as a cheap force multiplier with minimal survivability upgrades and the second is as quite an expensive points sink that has much more flexibility and staying power. Below are a cheap and not-so-cheap options with reasoning.

This commander presents a Leadership 9 buff to all of the army, but only on the table and out of assault. It is therefore important to keep them protected by putting them in a transport like a Dracosan with a 10 man squad of Veletaris. Hide them there and pop out only to judicially use melta bombs where applicable. Name of the game is to survive!

Nearly DOUBLE the cost of the Legate. BUT you get to pick your warlord trait which includes a solar auxilia trait to give you eternal warrior! This makes the Lord very survivable indeed. Additionally if you stick them with a Household Retinue in a Dracosan you now have 10 x WS5 buddies (due to close formation fighting) that have a shroud bomb (leadership test needed to charge) and will lose D3" to their charge roll.

This makes the Lord and his unit hard to charge until you are very close and if the Lord pulls of the charge then he has 5 x Paragon Blade attacks at WS5 + 23 Power axe attacks at WS5 that also have preferred enemy. The Lord with his 2+/2++ (effectively) and eternal warrior, if selected, can tank wounds for them and then they can wreck face.