Good day to you!! 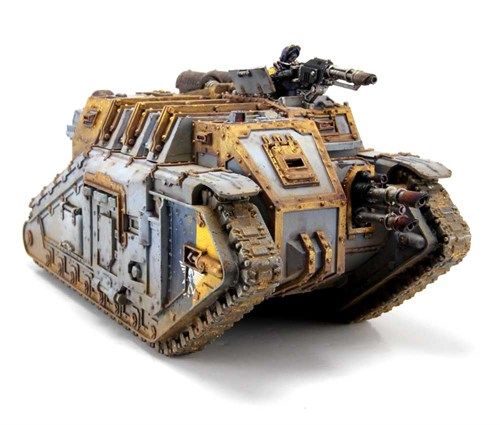 I've been piling in the hours to get my solar auxilia painted up recently. I was incredibly happy with how the Malcador Infernus turned out, so I dove right in with the regular transport for the Solar Auxilia - The Dracosan Armoured Transport. This is the only available transport for the Solar Auxilia outside of the Arvus Light Transporter and certain Lord of War choices like the Storm Lord.


The Dracosan rocks an immense profile for your troop transport and costs only 135 points base:

That is a 5 hull point vehicle with damn fine armour for the price. Oh, it also carries 20 models!! 20! Important to note it cannot transport bulky or bigger models (poor ogryns) and it is NOT an assault vehicle, with NO fire points. Access points are on both sides.

Overview - A human standard BS of 3 is more than made up for by more HPs than a land raider and decent armour. 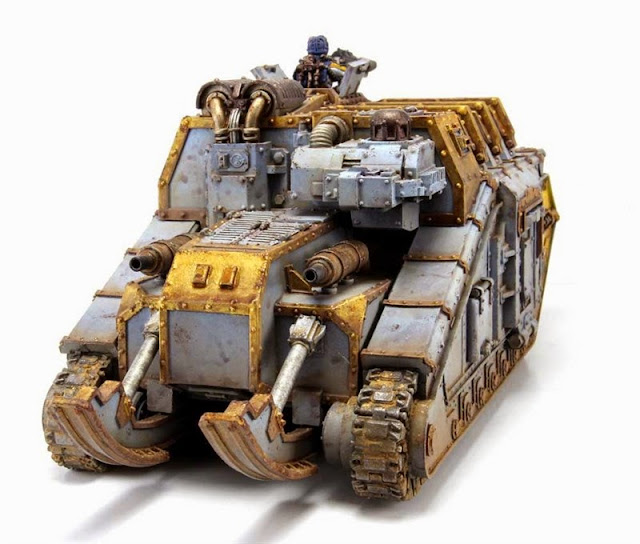 The Dracosan is a transport at base and so does not come with firepower in mind. That said it has great utility with its armaments all the same.

The lascannon we know and love, though being twin-linked it seriously mitigates your sub-par BS3 which is very handy indeed.

The Dracosan also comes with extra armour as standard along with smoke launchers and a searchlight.

Overall the Dracosan is a power house transport and so getting a twin-linked lascannon on such a durable frame is a really sweet bonus. Until you see what else you can take....

Offensive Upgrades (they swear too much):

Thats right! For the princely sum of 30 points you can upgrade your twin-linked lascannon for a demolisher cannon!!! That also cuts the transport capacity down to 10 mind though. But it still makes your transports into vindicators...

Defensive Upgrades (they always say it wasn't them):

Armoured Ceramite. Yep for the price of 20 points you can now melta proof your 5 HP transport! Whats more you can also give it a Flare Shield for 25 points making it effectively AV14 against all shots, or AV15 against blasts and templates on the front arc.

Bizarrely you have the option of paying for extra armour and dozer blade upgrades which you have already (dozer blade being a lesser version of explorator adaptation). You can also pay for an auxiliary drive for never ever getting stuck. 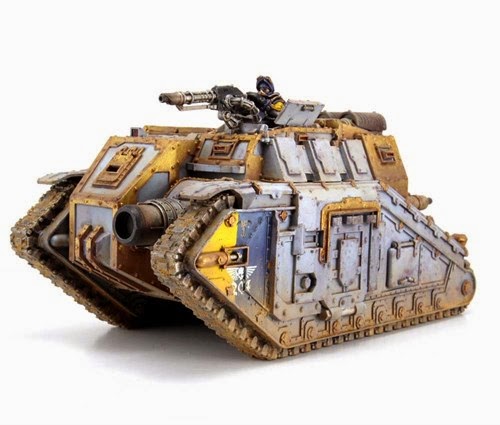 With a demolisher cannon, coupled with a flare shield and armoured ceramite you punch 210 points for your Dracosan Transport. BUT you aren't just getting a transport but a better armoured vindicator that can also carry 10 man squads into the enemy. With your short ranged weapon you will be naturally inclined to take them up the field which is where your short ranged weapons want to be.

I prefer this set up for veletaris squads that keep their volkite, allowing you to deploy and lay down a lot of fire on both an armoured target or 2_ save squad with the cannon as well as target squishy things with the volkite.

One of the issues with taking the demolisher however, is that you will be unable to add an independent character to your 10 man squads. So if you want to have a retinue squad to accompany your Legate commander you will have to settle for the twin-linked lascannon option. I use the word "settle" very loosely as it is still an excellent option.

Keeping the 20 man capacity and carrying las-section squads around might sound like a good idea, but given how bunched up your deployment will have to be, I don't recommend it. It is asking for you to be rinsed with templates the turn after and poof you are gone. The smaller squads have a greater degree of flexibility, indeed you can fill Dracosans with 10 man flamer squads yourself and burn baby burn!

Overall the Dracosn, like any none super heavy, can go boom with one lucky dice, however apart from a vulnerable rear armour you are looking at an incredibly resilient transport that can pack a hell of a punch. Plus, my god they look bitchingly good.