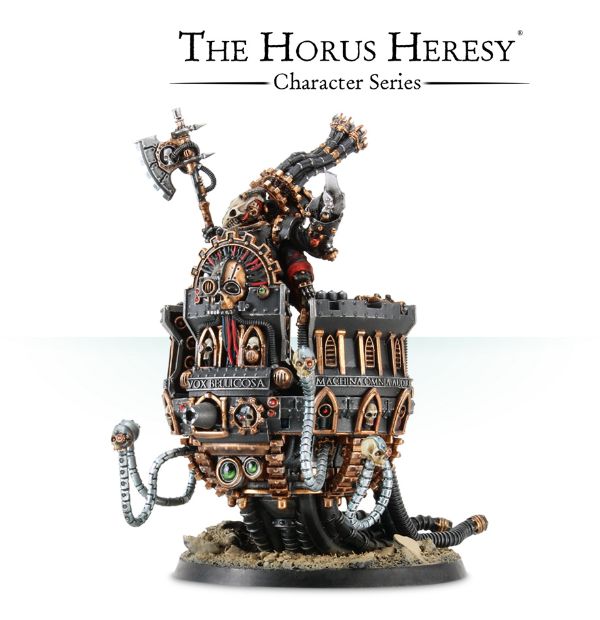 Today I'm going to review one of the special characters from the Taghmata Omnissiah that actually has a model - SHOCK - HORROR - I know right. And a bitching model it is too! An unknown figure for the most part before the heresy, Draykavac rose to prominence as a member of the dark mechanicum leading the traitors from mars under Horus' Banner and committed many an atrocity to soak his name in the blood and oil of history.

Draykavac is a very solid special character with excellent stats all round to compare to most Praetor level characters.

Overall - While good, the statline doesn't quite justify his base cost of 240 points but his rules and wargear go a long way to making that up.


Like other mechanicum special characters you generally get a good bang for your buck in terms of special rules. He has the following USR to his name.

Causing fear can really help in 30k when ATSKNF is not a thing. In addition he also has 3 additional special rules.

Warlord Trait - Death of the Flesh - This is Draykavac mandatory warlord trait and grants preferred enemy (infantry all types) to all units in the detachment when they are within 3" of an objective. Situational for some games, but in objective based games it is a brilliant boon against many many armies.

Liquefractor - A brutal, brutal special rule. Draykavac may swap all his attacks for one liquefractor attack at initiative step 1. This attack hits automatically and can only hit a model in base to base contact and IMPORTANTLY it hits that model specifically. Roll a 2D6 and compare this to the targets toughness value, for every point over the targets toughness value is they take a wound, so a roll of 12 on a T4 model would inflict 8 wounds!! Against targets with AV you half the armour for the comparison - so a landraider would have a value of 7, for every point over that value the vehicle suffers a penetrating hit, so a roll of 12 would grant you 5 penetrating hits! These are resolved at AP2... But only against targets with a toughness value.

High Techno Arcana - Stataraga - Walkers, monstrous creatures and super-heavy walkers are granted +1" to their charge and sweeping advance rolls. The charge is brilliant, but as a lot of units in the mechanicum can't sweeping advance that is less beneficial.

This guy has oodles of good stuff to throw around.


Draykavac has a machinator array (toughness is already included in profile) with an inbuilt melta gun and servo harness. Importantly it also grants +2 attacks at I1 in ADDITION to his other attacks so you can liquefractor and use this.

A mechanicum protectiva grants him a 4++, though he can't boost this in anyway.

A paragon blade gives you an at initiative combat option though for the most part you're better off with his special attack.

Draykavac also has a cortex controller which helps if you are taking cybernetica constructs with control radius, but he doesn't have the ability to enahance them with cybertheurgy.

A graviton gun grants you a decent bit of firepower with haywire taking on vehicles and the blast marker making it difficult for your opponent as it becomes difficult and dangerous terrain.

Draykavac can take an abeyant for +25 points. Take one, stupid not too.

Finally he has a Djinn-skein which is brilliant! Coupled with cyber occulari which he can take 4 of for 15 points each, the Djinn-skein allows barrage units to take line of fire from the occulari. It also allows the warlord to grant himself or any unit of the primary detachment within 6" +1BS, because you can BS5 easily with mechanicum on Castellax for example you can make them BS6. This also allows deep striking units a no scatter radius of 6" around Draykavac.

Draykavac can only be taken in a traitor detachment, but he can be a HQ of a Taghmata Omnissiah detachment (not reductor or cybernetica) OR he can be the warlord of a Questoris Knight army (+1" to charges remember!). In a Questoris knight army Castellax become none compulsory troop choices and vorax become fast attack choices.

I honestly think running him in a knight army is the most competitive way to run him, with a 3-5 man squad of dark fire castellax running around with him, yes their guns get hot, but you can mitigate this by giving them BS6 for a re-roll! Give them some close combat upgrades and they become a tasty unit with +1" to their charges too. You can't join him to the squad as he doesn't have Patris Cybernetica but you can bubble wrap him with them.

But for most people that will not take him in a dirty list like that but in a normal Taghmata list, I would still stick him around a Castellax squad and then use Thanatars in cover for precision barrage shots with the cyber occulari. This will work best with a Magos Dominus in the backfield to buff the thanatars with cybertheurgy.

Alternative units that go well with him would be Scyllax or a large fearless meatshield of Adsecularis Covenant, but make sure you have a unit within 6" that can really benefit from that

Thallax will also do very well deep striking, though it is best to remember that this guy is not the fastest fella in the field. He needs a bodyguard to really excel and take some hits. His lack of eternal warrior does mean a paragon blade will make you cry so try to steer him clear of characters or units with those instant death capabilities and remember to shoot the shit out of him.