The Loyal IIIrd Alone Vs The Burning Horizon... Or Are They?

Evening travellers of the Nuo-sphere, 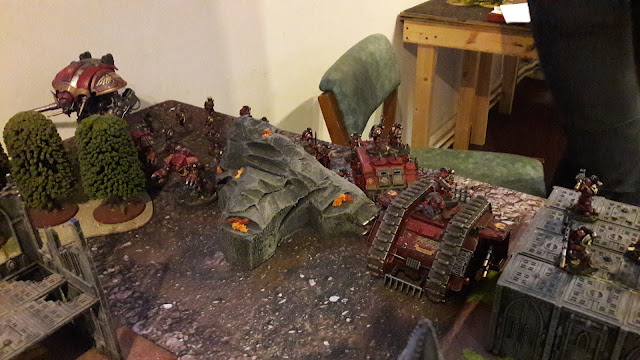 The Burning Horizon, vexed at their failure to protect their Lord Praetor during the ambush of the Loyal IIIrd legionaries have mobilised their full force to hand. Honoured ancient Land Raiders twisted dark my Lorgar's madness rumble into the desolate burnt avenues of a city offered up to the primordial gods. A once honoured Knight, strides resplendent in the words of Lorgar, each Colchisian rune a burning brand of insanity of the Knightly pilot within. Three brothers that bear the words, interred in tombs of ceramite, clad in contemptor armour stride the field; had they been free of these bonds would they have so easily fallen? None shall no, but they stride to war nonetheless. 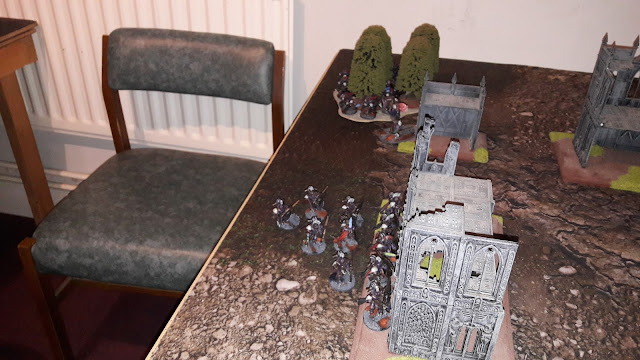 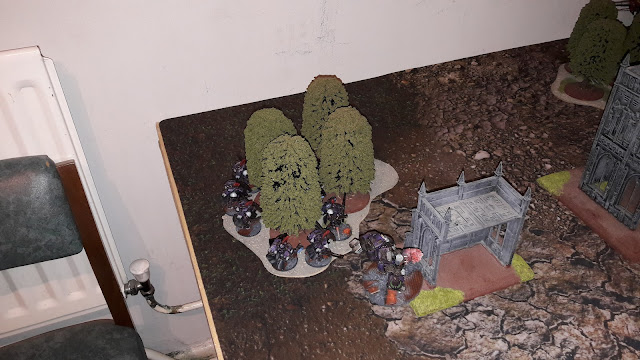 Saul Tarvitz stands firm with the survivors of the Ambush. The noble Palatine blades and their Legion Champion; the few of their number to remain loyal amongst the higher echelons of the IIIrd's elite; had not survived the fight through the maddening crowd to slay the erstwhile traitors Praetor.

However now, backs against the wall, they stand, their beacon for aid in a land of foes unanswered. Each binaric cry into the void echoing back in solitude. Here the mighty few would fall, not in dignity or in brotherhood, but in honour.

The fallen Praetor of The Burning Horizon strode into view, his sickly pale flesh spoke only of death, but he moved with grace anew and burned with an aura that spoke only of foulness and decay. 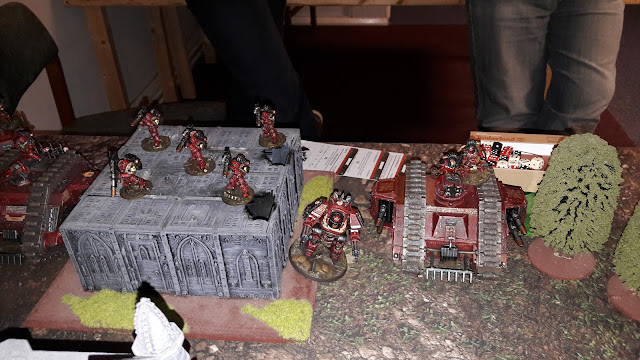 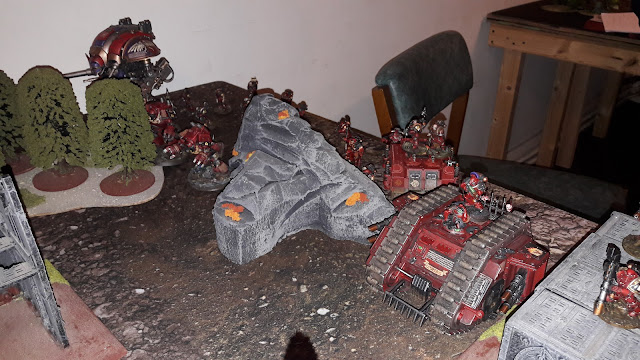 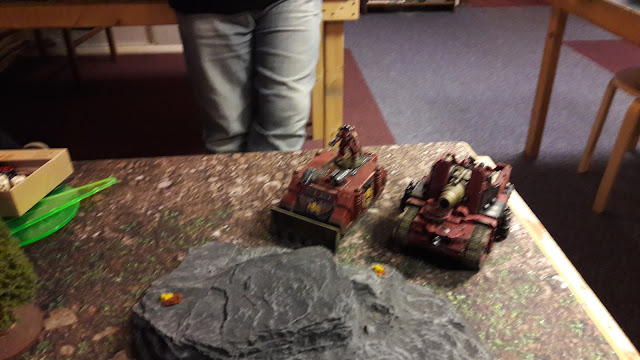 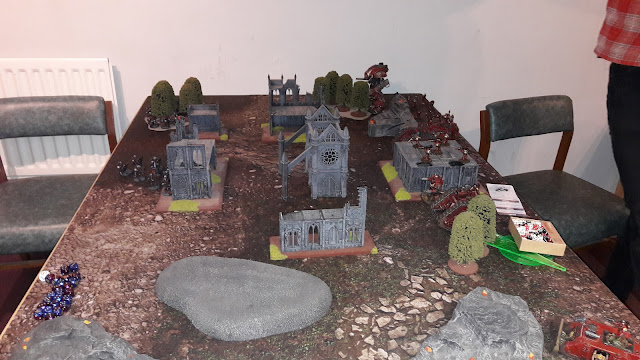 The advancing forces, cowards such as they were, were cautious in their approach, having learnt the sting of over confidence at the hands of cloak and dagger before. The knight however made his presence known with a boom of his cannon. Wood shrapnel exploded as trunk splintered into mulch overhead, great falling boughs crushed marines beneath them just as secondary shells detonated others into meaty fragments of flesh that lived mere nanoseconds before. 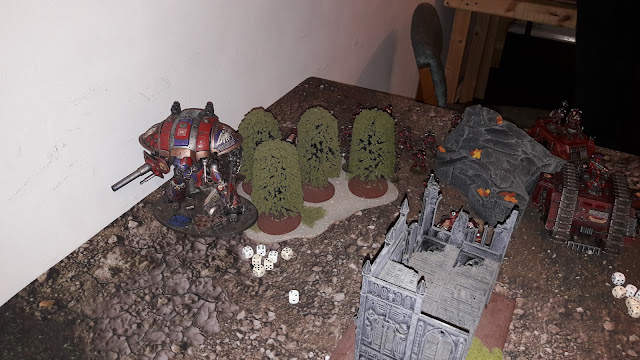 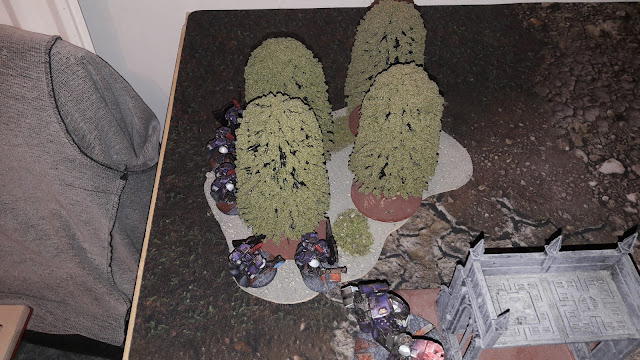 Grinding gears softly embalmed in a chant of distant machine code clatter, grew loud in the ears of the battlefield. Striding over the hill and rumbling on tracks of blessed adamantine making, a call came whistling down; a call of fealty, loyalty and death. Fealty to the honoured, loyalty to the Emperor... and DEATH to the traitors! 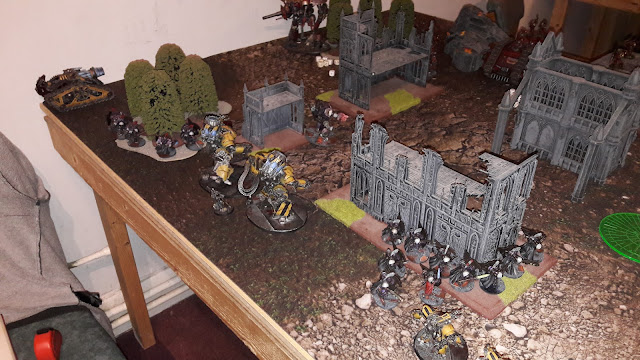 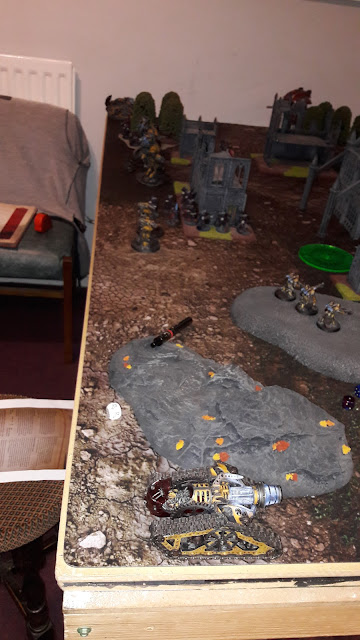 The whip crack of arced lightning and hot fizz of perfect plasma cut the air in two.The venator's clear aim sent the fury of the Emperor's chosen into the armoured side of the approaching Medusa. A clear hit fizzled through the hull to a dull clank, followed by the ignition of stored shells and the vox screams of the damned and the dying as its fusillade in waiting surely did make the Horizon Burn if but for the briefest moment. 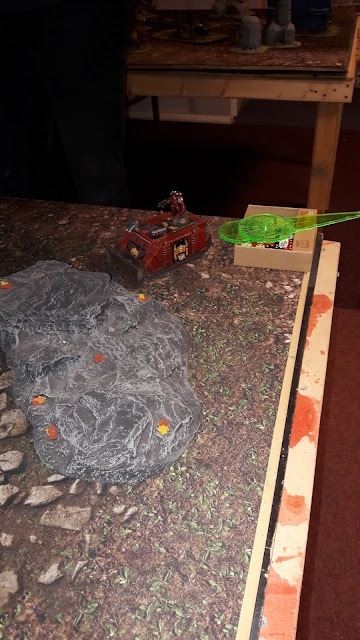 The Traitor Legion's daemonic master held his ground with his fanatic horde as the armoured spear tip rumbled onward under his watchful maleficent glare. 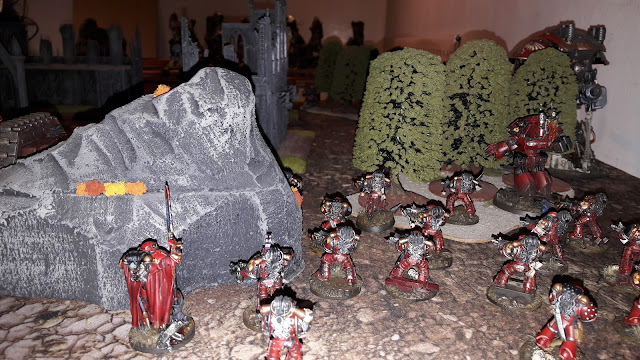 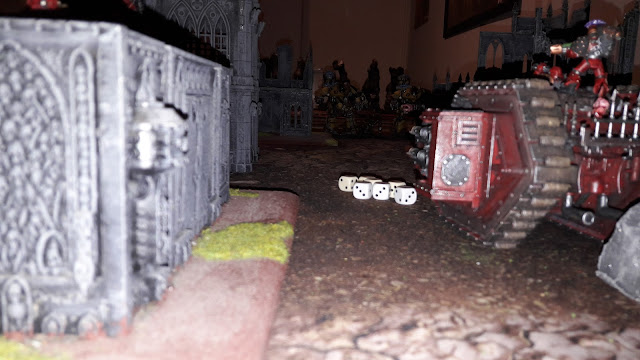 The firepower returned was full of flame and fury, a single assault marine from the IIIrd now stood. All around him brothers lay slain by brothers of old, their corpses a burning rage deep within his gut, shame rolling down his face as his gauntlet clad hand wiped blood of his blood from his outer visor.

Captain Tarvitz and his Breachers made headway up the centre of the field till traversing fire from Land Raiders and Contemptor alike spat death and fury at them cutting two of the brave souls down. Taking cover at the base of the central cathedral Tarvitz cried out "Oath to the Emperor!" as the fallen form of a Death Guard Captain lay within, unmoving. The defensive points set up within the building that Saul could see indicated he had made this his place of choosing and preparation. This would make entering the cathedral under fire impossible, but that must be their aim should he still yet live.

The crackling dark cannons of the Mechanicum, as advanced and capable as they could be, fell foul of the mechanicum's own hand as it fizzled harmlessly into black crater pock marks in the traitor Proteus' hull. The red tide grew closer. 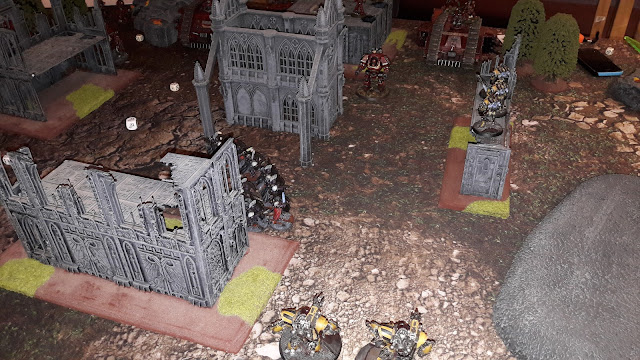 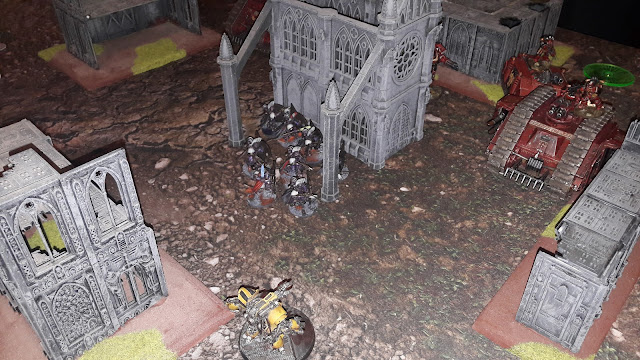 With a roar of defiance, the sacrifice of an honoured Domitar and the field of battles major firepower, the loyal IIIrd grand old servant Rylanor ran with full fury and detonated the fields of the Knight, overloading its ion reactors in a cataclysmic explosion that rent the sky brighter than under its home sun for a full minute, seemingly its expanse of sound and light brought silence to the battle, despite the continuing fire of all guns, they could simply not compete with the wrought furnace of destruction that this brought. 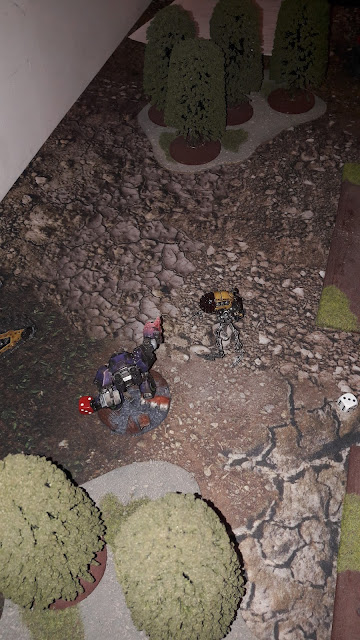 Sensing a shift in the tempo of battle The Burning Horizon screamed cries of loyalty to gods long thought dead and gunned engines breathing the fumes of tainted spirits into life. Crashing and wheeling through the fallen debris and bodies of previous battle they careered to the cathedral, perhaps unknowing of its contents, perhaps wise and full of blood lust for the fallen Death Company Captain as much as IIIrd. The Breachers made no secret of the hatred and dashed forward to meet the enemies with blunt of their shields as all the weapon they had if necessary. 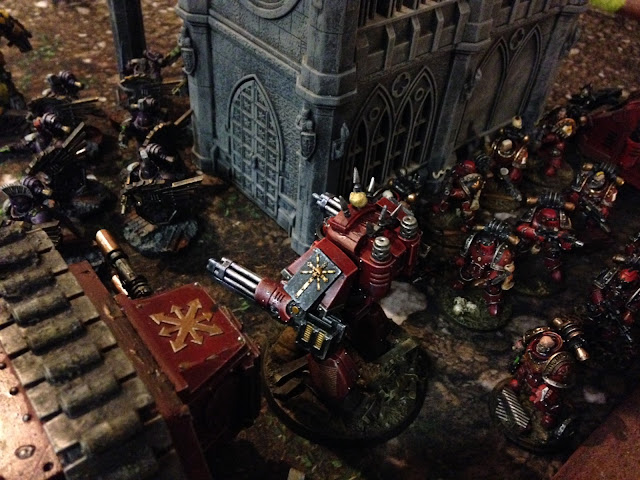 Machine cant zeroing in co-ordinates to support the Breachers charge rang out in the back lines of the loyalists field. The dominus roared binaric commands of fervour into the towering colossus that was the Thanatar next to him and 3 great balls of blue lightning plasma flew skywards. 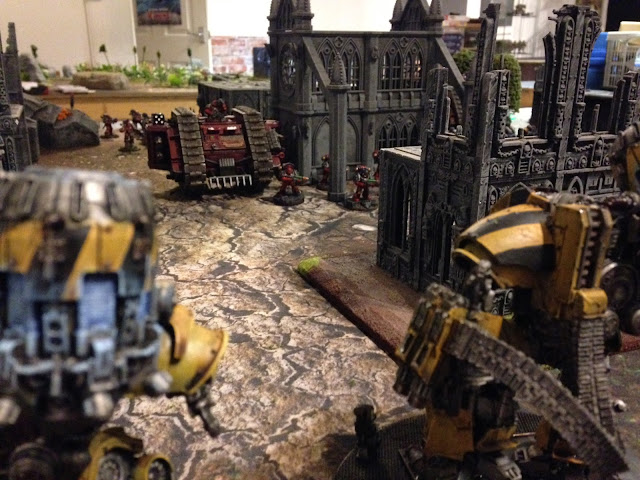 The Traitor Praetor, contemptuous and moving slowly as if through a vat of prometheum, simply flicked his gaze at the falling balls of plasma. The first and the second crashed harmlessly wide, diverted by a purple halo of screams and hands clawing from the immaterium itself. The warp made flesh, made real and terrible. With a piercing look that the Dominus felt through the solid walls of the broken city, that shook him to his metallic knees and cut his binary to a halt, the Traitor flicked his eyes down and the third ball of melting plasma death flew onwards and down to the breachers... 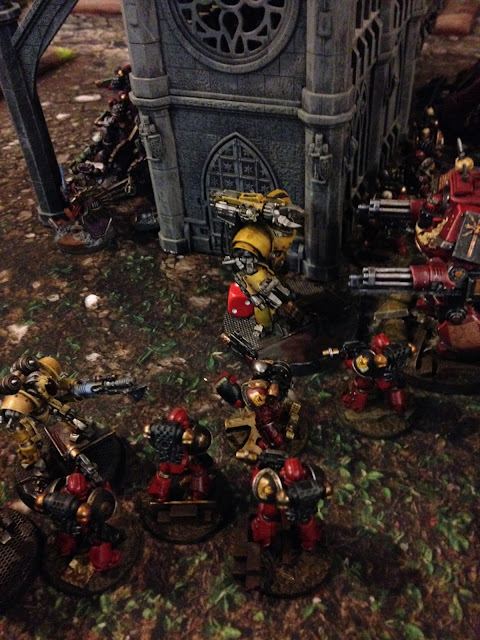 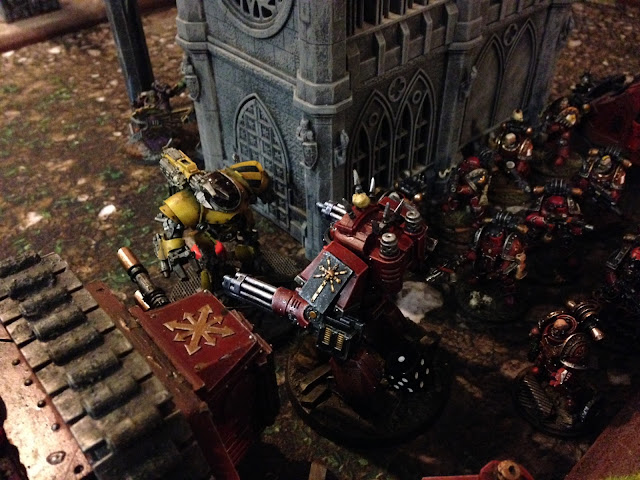 An enraged Castellax, apparently aware of some deceit undertaken ran screaming machine code in short screeching bursts that repeated over and over, hammering the Mortis to the ground before being pulled down by weight of small arms fire. Bolt round detonating leg joints, cracking power cables, yet still the screeching continued. Until the centurion calmly placed a plasma pistol to the clear dome with swirling red pearlescent liquid beneath and pulled the trigger. The screeching stopped all too suddenly, the absence of its noise almost as sudden a pain as its start. 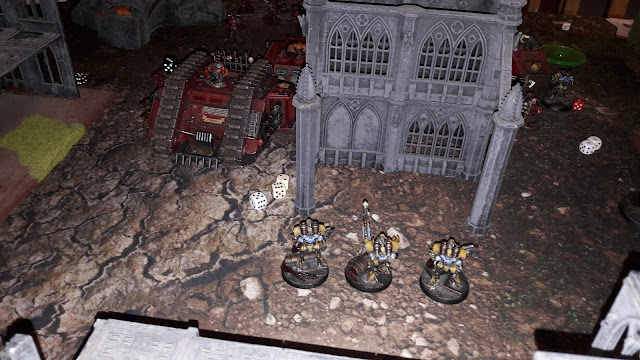 Mind slaved thallaxi responded to the call of their brethren, their lightning guns slaying the remaining traitor legionaries as they jumped wildly on burst of jet fuelled propulsion, metallic hoofed feet punching them off masonry which showered to the ground over crumpled bodies of the fallen breachers; eager to do their masters bidding. 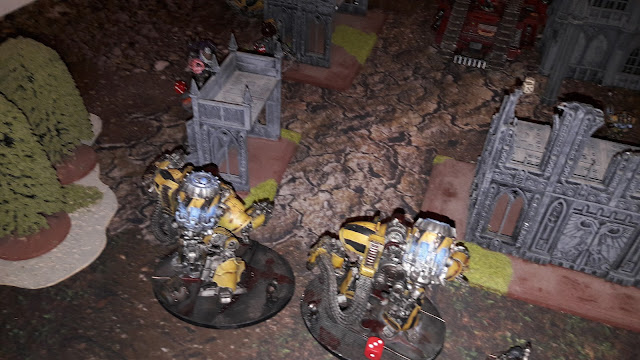 The Dominus would not be cowed again. As the honoured Rylanor extricated himself from the pit of glass fused ground that marked the death of the Knight, the skies lit up again as the strange deadly beauty of plasma rain blistered down on the traitors. The traitor praetors smile was short lived as his first sergeant threw himself in the path of the arced lightning that flew from the flanking Venator. His coldness and pride and left him open... His attention taken by the lightning death incoming, the plasma fell and the centre of the field exploded in blistering light...

The Burning Horizon retreated from the field as the plasma rain fell. Each Thanatar exhorted to fire again and again until their neuro-circuited bio-organics burnt from the inside, the flesh is weak and could not work to the maxim of the Magos Dominus. The piercing eyes of the Praetor had reminded him of his own mortal organic weakness; the flesh that was chilled by his gaze spoke openly of that. But this creatures flesh was flesh that had been broken? What power kept the weakness of flesh at bay...

Rylanor's great hulking frame knelt slowly. His giant power fist cycled to inactive, the gore all but evaporated by the corposavantic energies, and reached down slowly to the pile of breachers that had died so ingloriously. Rising to his feet he held the broken body of Captain Tarvitz of the Loyal IIIrd in his grasp, far more gentle than any one Astartes might have guessed possible by such a brutal metallic frame. "Saul" said Rylanor, not softly as no voice amplified as such could ever be, but also without the boom and authority of the norm.

A long silent half terran minute passed before Saul Tarvitz coughed and whispered "The Death Guard... they live"

I hoped you enjoyed the more prosaic form of this battle report, please let me know if you did or didn't as these take a lot longer to write! Ed is the owner of The Burning Horizon and he has written some wonderful background prose for them! I will be sharing that on here with pictures of his beautiful army so you have that too look forward to :)

He might also be hooked into a side project I am starting, but more on that in the new year...