8th Edition would have Improved 30k - My View

So we know that for the foreseeable future, the Horus Heresy aka 30k will be sticking with 7th edition 40k, albeit in a slightly modified manner. There are strong arguments on either side of the debate regarding whether this is a good move or a bad move.

I am firmly in the camp that says 8th edition would have improved 30k.

I am well aware that 30k and 40k operated differently under 7th edition, however I think there is a degree of blindness on some players that think that 30k is perfect under 7th edition, and doesn't have problems. The chasm of problems that 7th edition suffered in 40k were very much down to rules additions rather than the main game mechanics true. By which of course, I am talking about formations and the in balance between codices.

However, the foibles of 7th edition are the Universal Special Rules (USR) within the core mechanic. When a unit was designed in 7th edition, in order to represent what that unit can do in game, rather than writing a rule for that unit, a certain amount of jury rigging was performed with the currently available USR to fit that role.

This has led to certain mechanics working better than others. This in turn has led to a broad homegenisation of Astartes armies in 30k. Who hasn't seen the army made up of a flare shielded spartan, quad mortars, a leviathan, tactical vets with sniper and then caterphractii terminators?

8th edition was a ripe opportunity to add value to the lesser used units of the games, of which there are many, such as destroyers and recon marines, breachers and tartaros terminators. How many people ignore legion astartes specific units because they simply don't compete on a price point with your standard Pride of the Legion built force?

I am still holding out hope for the move to 8th edition in a year or so, to allow that ground up re-balance which I think 30k DOES need. Yes it is nowhere near the imbalance of 40k in 7th, but I think that comparison hides an imbalance nonetheless.

With regards to the books, the black books very often become out of date anyway due to re-pointing and rules changes appearing in the red books, I don't think anyone buys them purely for rules. And the red books could easily be released as 1 or 2 indices as we've seen how many they can fit into a book for 40k.

Finally, the redesign of rules for almost all of the vehicles will have already been done for 8th edition, as evidenced by the on release availability of chaos and imperial indices for forgeworld units. These would have been simple to port over for 8th edition 30k. Indeed the primary statline of marines, the bulk of 30k units, would also have been easy to port over, given how unchanging the marine statline is over the interceding 10'000 years.

I am not a doomsayer and I will continue to have fun with modified 7th, but 8th would have addressed the issues with 30k that ARE there. To say its a perfectly balanced ruleset where all choices are equally viable is to ignore the vast evidence from events and the lists represented, that this is simply not true. People are often averse to change, but if we as hobbyists were that resistant to change, we wouldn't all be stuck in this swirling maelstrom of a past time for the time that we have been.

Apologies for the rant :)

Here, have a picture of Serena and mines cat: 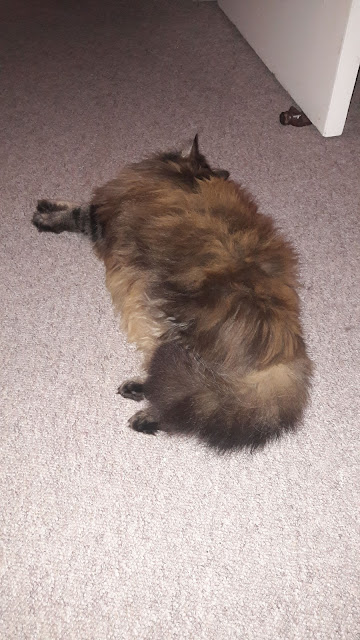