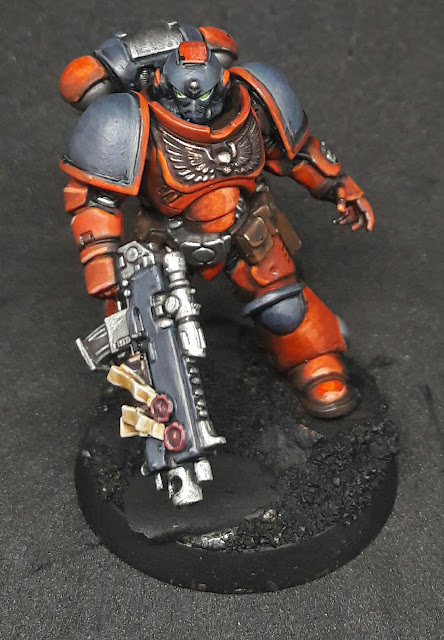 Today I thought I'd write out some points from a discussion I had with one of my regular gaming pals Dan. We had a 2000pt game of space wolves, versus Deathwing and Primaris Marines. The Primaris components of the list were:

These are all I have partially built and based for the moment, and whilst I normally don't play with unfinished models, I was itching to see how they would play out. The game turned out to be a win for the Primaris/Deathwing combo, though with savage brutality and casualties on both sides. Dan was running Space Wolves as it happened, and I'll have a little note on them at the end.

After the game finished, Dan made a point about the Primaris being 'easy to play'. And after some back and forth with myself playing Devils Advocate, I have mulled this idea over and I have come to agree with it. I'm going to breakdown my thoughts per unit below:

The Captain in Gravis armour didn't manage to get into combat, so his utility beyond re-rolls of 1 wasn't really realised in this game. However, that ability to re-roll 1's with the Hellblaster squad was invaluable! The hellblasters have a 6 inch move and 3 inch range, effectively putting 5 shots out at 36 inches, or 10 shots out at 21 inches (6 inch move and 15 inch rapid fire/double tap range).

Being able to overcharge to S8 and 2 damage means that these guys posed a threat to anything on the board, including a leviathan dreadnought. The captain in Gravis armour meant that overcharging was somewhat mitigated as you could re-roll those 1's and potentially avoid losing a model.

The potency of this combination, in addition to the enhanced ranged of the guns over traditional plasma really does make this pairing relatively easy to use. Double wounds on the Primaris marines also gives the squad good survivability, especially in cover, from any deep striking nonesense that tries to take them out.

The intercessors main bonus, other than the 2 wounds, is that extra 6 inches of range. It seems relatively trivial, but particularly when paired against an opposing astartes force using regular bolters, that 6 inches allows you to stay out of effective range of small arms fire and still go for juicy targets like tactical squads with gay abandon.

This in turn means that alternative resources must then be diverted to take the Intercessors out, this can result in overkill of the unit, even with its 2 wounds apiece, but crucially they are taking fire from bigger targets OR they are simply ignored for those targets. Ignoring them is probably the best decision a lot of the time I'd wager, but they are a potent thorn in your opponents side because of the range and the enhanced AP of -1 over a regular bolter.

The real stars of the show. And how! Not only do the Inceptors have enhanced toughness (5) and a 10 inch move, they also put out a staggering 6 shots each at 18 inch range! These shots are at S5 and Ap-1, so mini assault heavy bolters. Being assault means they can also advance for extra range and still fire those weapons, albeit at a -1 to hit. A squad of 3 puts out a frankly incredible 18 shots, that will wound anything shy of toughness 10 on 5s. AND as they have the fly key word, they can also fall back out of combat and still shoot.

Coupled with the ability to deepstrike, these chaps can virtually guarantee being in range of the targets they want to obliterate, and short of storm shields, they can put serious hurt on any 2+ armour save as well by reducing it to a 3+.

Now these guys come in at over 200 points a squad, and I'm not saying they are invincible by any means. But they have a lot going for them that make them incredibly versatile.

I think that Primaris marines are easy to play. Note however that I do not think that this equals over powered. The relative costs of each of these units is I think fair, particularly in the case of the Inceptors. When I describe them as easy to play, I mean that there are obvious uses for each of the component units that we currently have on release.

Why is this? Well simply put, if you want to attract people to a game, you don't want an overtly complicated faction as your main draw, and I think the Primaris marines fill this ideal admirably.

I have no doubt, that you can beat Primaris marines with all manner of lists and armies, however, the relative tactical acumen and knowledge of your units abilities is higher for those armies when compared to the 'entry level' Primaris marines.

They are not an auto win army, but they lack a lot of the more convoluted nuances that say T'au or Tyranids have, who have to take great account of markerlights and synpase respectively.

Do you agree? Disagree? Either way, polite and pleasant in the comments if you please :)