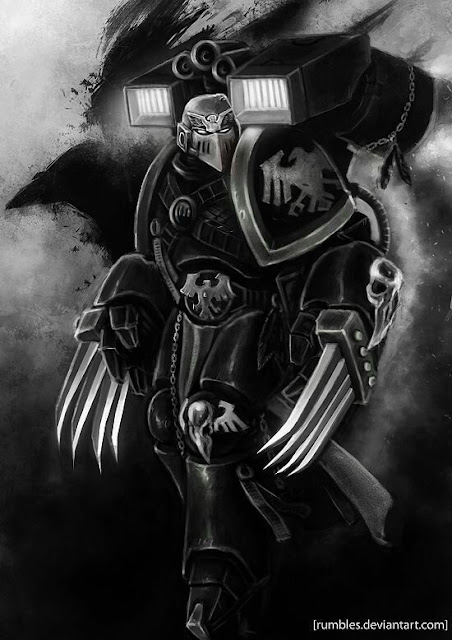 After finding a leak of the new Raven Guard rules that are being released by GW I though I'd go over them here as they are very very interesting, and any Raven Guard player should surely be very happy indeed, particularly after the lack lustre showing they got in the recently updated Astartes Codex.

Strike From The Shadows - Any Raven Guard unit that does not begin the game in a transport gains shrouded for the first game turn, in addition a Raven Guard player can add +1 to the roll to see if night fighting is in effect.

This is fantastic, giving a good chance of a 4+ cover save in the open if night fighting is in effect on a 3+, add in any cover the units are in and this makes even your basic marines very durable to any fire that doesn't ignore cover. Raven guard bike units? Jinking on a 2+ as standard even without night fighting!

Winged Deliverance - Raven Guard jump units can use their jump packs in both the movement and assault phase AND can re-roll failed to wound rolls for their hammer of wrath attacks.

Finally, something that really emphasis a jump pack orientated Raven Guard army. Extreme mobility and punch when combined with the Strike from the Shadow special rule make them an auto include, AS THEY BLOODY SHOULD BE!

1 - Vanish into Gloom - When the warlord and his unit are targeted they can immediately move D6 inches away receiving +1 to their cover save if they end up in cover. A once per turn ability.

Wow - can you say warp spiders?

2 - Concentrated Attack - At the start of the charge phase you can nominate a unit in the warlords line of sight and any unit can re-roll failed charges against this unit.

Strike as one! Brilliant if you need to make that charge

3 - Master of Shadows - Once per game you can bring night fighting into effect as long as your warlord is on the battlefield.

Combines superbly with strike from the shadows again.

4 - Silent Stalker - Enemy units must pass a leadership test to overwatch the warlords unit. Subtract 2 from the units leadership if the warlord is charging through cover.

Nice, but situational I would say, but not awful at all.

5 - Exit Strategy - If your warlord is on the battlefield you can add or subtract 1 for the die roll to end the game.

WOW! This is amazing in both eternal war and maelstrom. More so in eternal war but still, if you can force the end of the game when you have the lead or carry it on if you need that extra turn this is a game winning warlord trait.

6 - Swift and Deadly - Once per game the warlord and his unit can charge even if they ran.

This is bloody good too if, again, you really need to get that charge to either kill a unit or contest and objective.

These are all very good apart from number 4, but number 5 Exit Strategy is the jewel in the crown. My goodness it is brilliant.

Other things to come...

I am currently digesting all the formations that also are now available to the Raven Guard and some of them are fantastic, really forcing the point that Raven Guard are jump orientated as well as speed orientated, making truly fluffy Raven Guard lists all that more viable.

There are also a whole set of relics for the Raven Guard that are going to be available, a quick glance of these reveals nothing to amazing but I will go through them diligently in due course.

I cannot recommend that if you play Raven Guard you purchase this campaign supplement with these rules in, YES it rankles that these weren't included in the Astartes Codex, but, honestly it seems like its better to have this individual attention given to you than not at all.

I haven't looked at the White Scars rules yet, but I will be interested to see how they handle them in the wake of the powerful Ravenwing rules, but White Scars have never held a great deal of interest for me I'm afraid so I won't cover them on here.

Do check back in the coming days for a run down on all of the other goodies the Raven Guard will be getting.