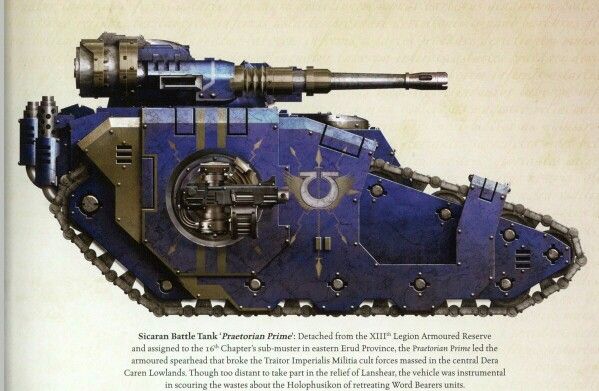 Today I thought I would jump back into the Legiones Astartes after so much Mechanicum based posting and review a very popular tank in both 30k and 40k. The Sicaran Battle Tank and its Venator Cousin. The review will take the same shape as all the others, which I hope you now know and love. I will point out now that the Battle tank comes in at 55 points cheaper than the Venator so you can apply that logic to choices you might make with the upgrades that I list below.

This nifty little tank only has 3HP on a 13:12:12 chassis so its not as durable as many of the other "big" tanks out there in 30k land, but with a rear AV12 it still has a decent level of resistance to penetration (I say). Along with a marine standard ballistic skill of 4 it can certainly put out some hurt. Additionally the Sicaran chassis is a fast vehicle giving it greater range on its weapons and the ability to fire more weapons on a short move.

If taking these vehicles in 40k, these are Relics! So you can only have 1 unless you have a techmarine for loyal Astartes and a warpsmith/forge fiend for the Traitors.

Venator only rule - Dangerous Reactor Core - any penetrating hits against the Venator variant may re-roll a roll of a 1 on the damage table and any explodes result adds D3 inches to the explosion radius.

Overview the Sicarian has good armour and speed for its price range in my opinion and I think AV12 can be very undervalued sometimes. When you are hitting with a S8 weapon and only glancing on a 4, I always feel I come off worse, and that is its weakest armour. No Spartan, but it doesn't cost the same either... 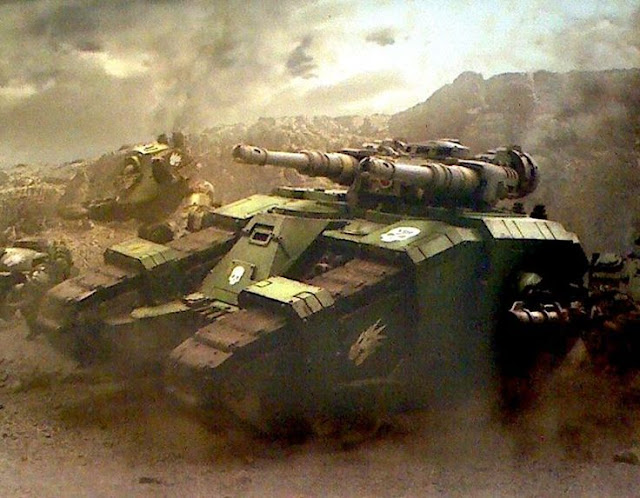 The two different variants of the Sicarian - the Battle Tank - and the Venator come with two different stock weapons, but their other upgrade options remain the same essentially. So to begin with I will just go through their "big gun" armaments.

Rapid Tracking - This essentially ignores jink saves. Specifically jink saves, NOT cover saves. This makes this gun the perfect killer of flyers and bikers or anything else that can jink, particularly when it has direct line of sight. The rending on it ensures that it can threaten anything with a 2+ save as well.

Shock Pulse is the bees knees much like its big brother the Cerberus Destroyer. Any vehicle suffering a penetrating hit from this weapon will be forced to fire snap shots for the next turn. This includes super heavies! So if you are facing any disgusting super heavy that fires template weapons, then 1 shot from this can render it impotent for an entire turn!

In addition to their main armaments both of the Sicaran variants come with heavy bolters. However the Battle tank has a hull mounted version and the Venator has a pintle mounted variant. Other stock equipment includes a searchlight, smoke launchers AND extra armour. The extra armour is an excellent defence against having your main weapon being made less efficient or redundant respectively. However in the case of the battle tank it might as well then just shoot at flyers!

Other options include a hunter killer missile, a dozer blade, an auxiliary drive and armoured ceramite. Armoured ceramite is the only one worth taking here but again with the Venator variant it makes it very expensive, so I would probably recommend you take this or sponsons as you're now pushing points that would afford you something better anyway!

Overall the Battle Tank is much more multi-purpose, with lascannon sponsons and armoured ceramite you are only 5 points more than the stock venator and you can threaten pretty much anything with your rate of fire, rending and then the high strength, low AP of the lascannons. The Venator is there to destroy big things, specifically tanks, and I would personally keep it stock. 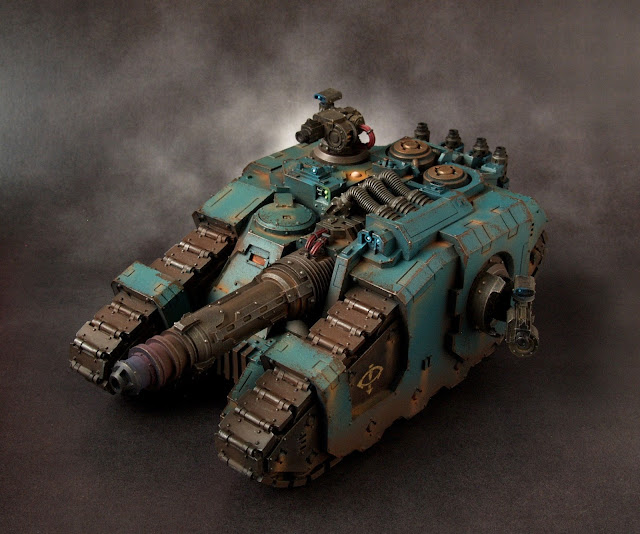 This variant is very very good at blowing up tanks. But I wish it had an extra 12 inches on its range. 36" means you will most likely have to move forward and then leave yourself open to being destroyed more as you get closer to assaulting units as well as melta-range. I love how this tank looks, but it is not the competitive choice.

Positioning is key, ensuring that you have a good line of sight to different parts of the battlefield, and areas that it can't see, make sure you present your other anti-tank threats there. that forces your opponent to put tanks where you can hit them. But if this is forced to snapshoot, has its main weapon destroyed, OR you face a horde opponent with lots of small gribblies and T6 big beasties, then you will have an expensive distraction sadly.

This variant is very very good at most anything really. The Accelerator Autocannon will help you punch bikes and flyers out of the sky with impunity, its twin-linked nature making hitting on a 6 against flyers sting that bit less. The addition of lascannons make this a monster of duality taking on hordes with 6 main weapon shots, 2 lascannons and 3 heavy bolter shot. Taking on even heavy tanks with the lascannons AND rending shots from the accelerator, and similarly punishing elite troops like terminators.

If you want the competitive choice then look no further. The range of this beast allows you to sit back a lot more, but still fire multiple weapons on the move as a fast vehicle. Plus as mentioned with armoured ceramite thrown in for extra durability you still cost less than 200 points.