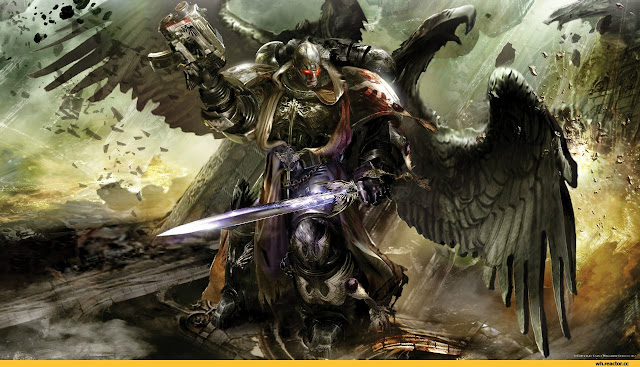 
Today I will be discussing my new Dark Angels purchase and how I am thinking of allying them with my Blood Angels. I won't be making any concrete decisions here but I'll be typing out loud and taking any feedback into consideration as well. In the coming weeks I will review some select parts of the Dark Angels codex that have a direct link to how I will personally play them, rather than reviewing all sections of the books, as that has been done very well elsewhere such as St Andrews Wargaming Blog.

This will also be talked about in the context of competitive gaming. I hope that the general impression from my blog is one of fun and narrative gaming that has quite a strong fluff bias in my Blood Angels and Black Templars forces. However I am very keen to start attending tournaments on a regular basis, aiming to get up to 5 or 6 a year and make sure some of these are the big competitive ones like Caledonia Uprising here in the UK.

My local tournament which is 70-100 people has a competitive edge to it that will be perfect for this, it allows full forgeworld armies but awards "soft" points for variety in the list rather than banning a spam list out right, so it strikes a nice balance for me. This tournament is in April most years so I have till then to get my full Dark Angel/Blood Angel army up to snuff.

Today I wanted to start of fairly heavy and talk about the Demi-company. I have all the mandatory units for the demi company bar a squad of devastators. These will be purchased next month and will be rocking grav cannons in a drop pod. They will be my hard counter to high armour save monster deathstars and things like the dreaded Wraithknight. These are not perfect and they have many weaknesses and can be suicidal but I am aware of this and hope that my list will contain both duality and redundancy to counter these.

Currently I have the the following set up in the Demi-company:

Now I also have the option of some veterans that came with my buy, but these aren't Dark Angel specific models (but they are very cool and pictures will be coming of all these models) so I won't be using them in this force and actually plan to build some Dark Angel veterans using a mixture of third party bits and the soon to be released forgeworld Dark Angel upgrade.

For those that don't know, the benefits of this formation are absolutely enormous. Firstly, any model that has the grim resolve special rule and isn't jinking (i.e. everything in the above list) will resolve its overwatch at ballistic skill 3. That is hitting on a 4+ people. That is huge. And it also reinforces that Dark Angels want to be charged not to charge themselves, there special rules are very geared to strong fire support play style.

Secondly, all the units in the formation have objective secured. So that is assault marines and devastators, veterans and the company master as well. In the world of Maelstrom this is ideal. Especially with the mobility of the assault squad, but also it means that when you drop in those devastators with their drop pod, it means you can deny maelstrom points with them, meaning that both the squad and the drop pod, potentially, have to be dealt with immediately. This can provide valuable distraction from the rest of your army. In my case this would be the advancing Blood Angels.

The Demi-company allows a strong fire base with a mobile element, and I plan to add a razorback for the plasma gun squad for extra mobility, and this fire base should be able cover the arrival of my death company. This would include a ten man squad of Death Company, Cassor the damned drop podding in and Raphen's Death Company. Taken as a Combined arms detachment this would add another 2 objective secured units into the fray (Cassor can't take a transport so the drop pod is fast attack).

This is currently my rough plan for how to synergise these two armies BUT I am open to suggestions and will be discussing other ideas over the coming days. I also have a Nephelim Dark Talon, 5 Ravenwing bikers plus a ravenwing attack bike and the big boss Sammael that came in my purchase (Sammael was sold by the same guy and fits into the custom foam of the KR multicase so I snapped him up for 18 pounds!). So I could go double mobile? But right now the enhanced overwatch and objective secured seem strongest to me.

Back on to normal fare!!

I have nearly completed another 5 death company and have begun painting 5 more. I have also received so eBay bought items that will allow me to build 20 more Death company. 10 of these will be built with some vintage metal death company bodies that have turned out some remarkably dynamic poses!

Anyway, see below for the nearly completed squad (just jump pack glow and base to do), the just begun squad and then the vintage death company assembled so far! 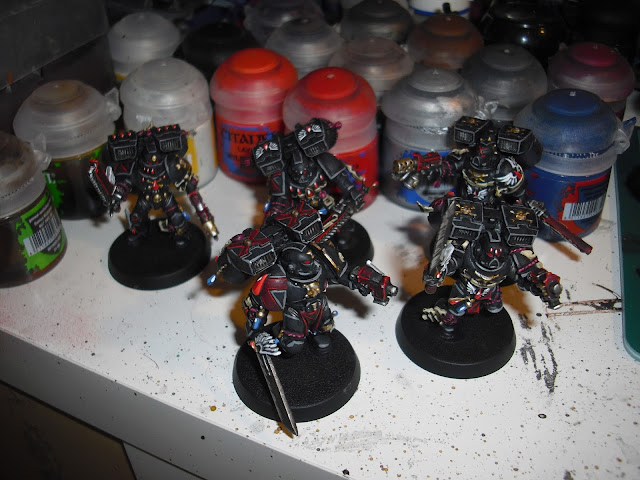 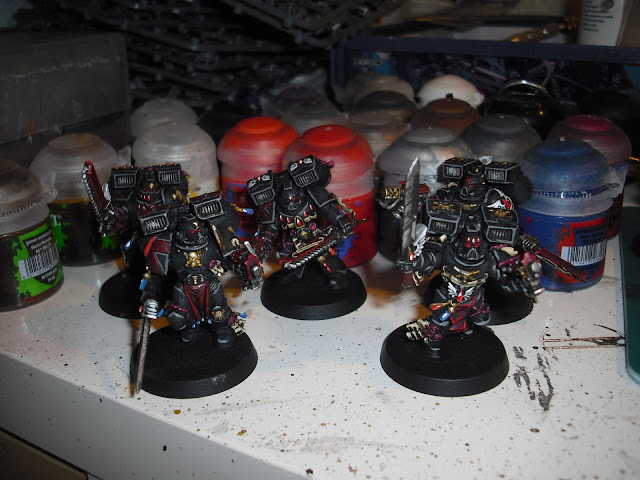 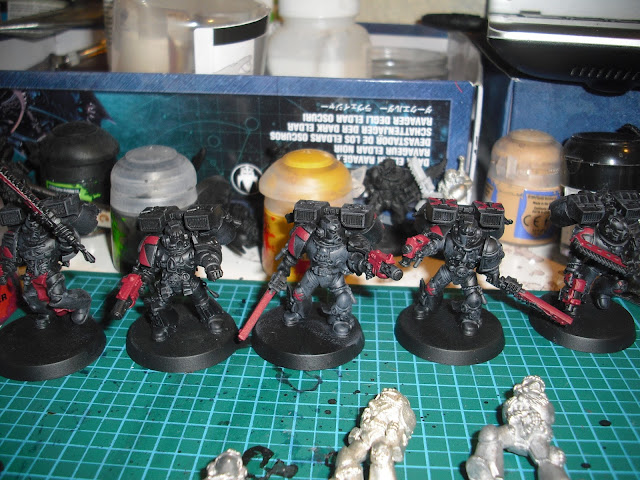 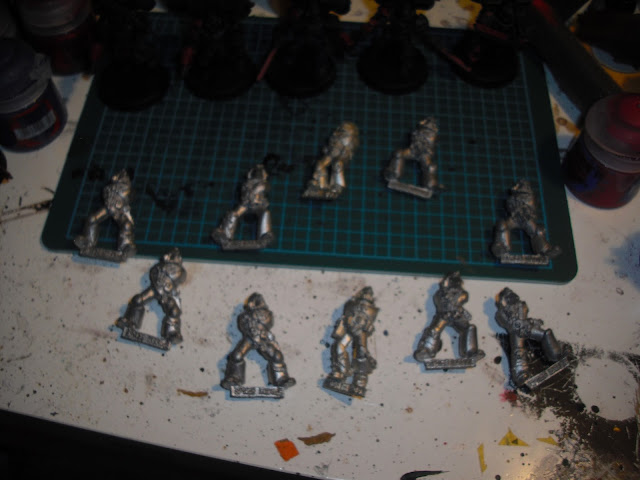 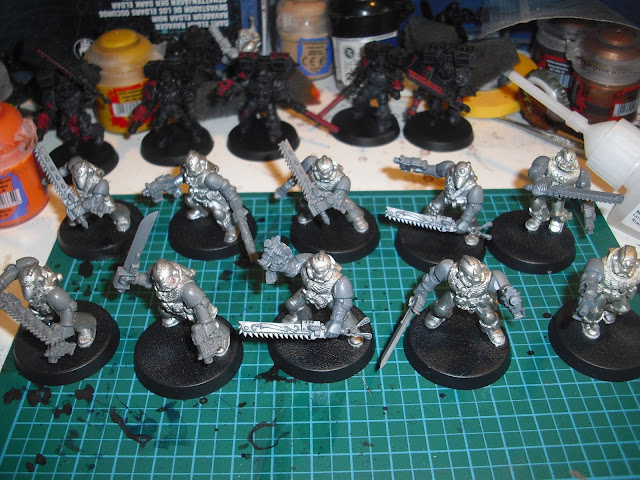 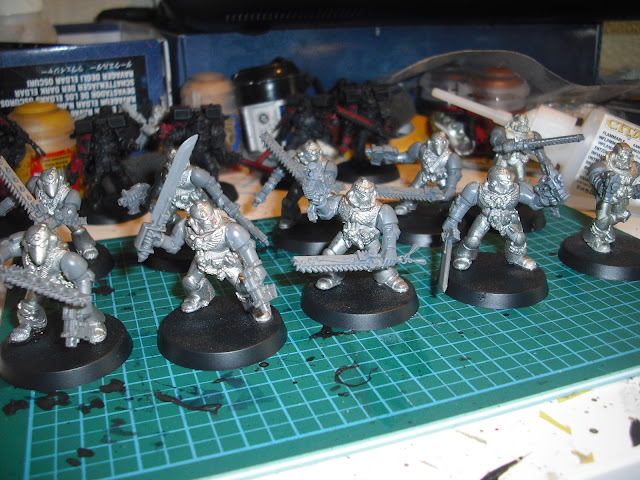 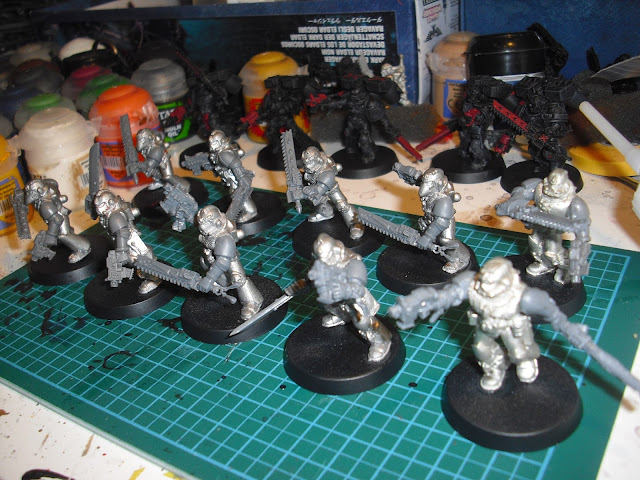 Anyway, till next time.