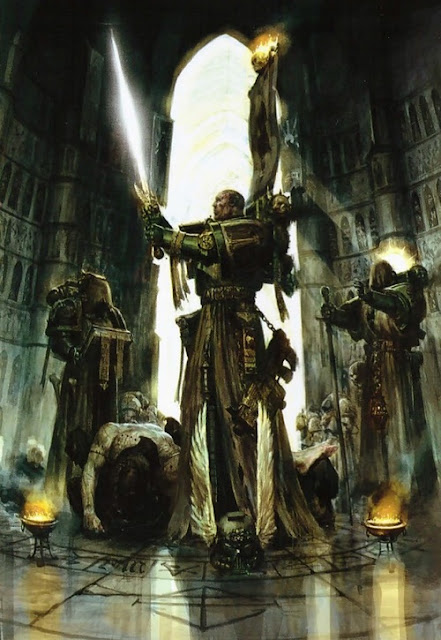 I've been a bit of a cheeky chap recently and splurged on all the things needed to build my entire Dark Angels force (mostly). I tell myself I'll buy these things when the other are complete but I can't help but habitually browse eBay when I have spare time at work and when you see a bargain you know you have to have it! I'm sure most readers of the blog can empathise with that.

So I recently purchased a Dark Angels Veterans Squad that was going for £16 inc. postage on eBay and these guys will be magnetised but their initial set up will probably be with grav guns and a standard to be the command squad. My previous veterans converted with axes and storm shields can either be a second command squad or just a basic veterans squad if need be, or I could just magnetise something else for them!

Secondly I bought some fixed bionic arms from Anvil Industry (the previous batch were multi part opposable ones - brilliant btw). In order to make the most use out of these I'm going to retcon my own fluff slightly. In the fluff I specified that during the "Rite of Unshackling" during induction to the secrets of the Dark Angels and the Black Hands Specific chapter secret, the aspirant veterans cut off their right arm. I'm now going to switch that to just an arm, so I can model both left and right bionics. Just cuts down on cost really!

Thirdly I also purchased a few pieces to convert 4 grav cannons out of, which I will detail in a next pose, but these parts only cost me £13 including postage, which compares to the £7-9 people are selling a single grav cannon for from the actual devastators kit!!

And finally, I picked up a Dark Angels Devastator squad which looks like it has utilised some of the Dark Angel Veteran parts as well 2 heavy bolters and 2 plasma cannons! I'm not sure what I'm going to do with this, possibly it will just be pulled apart and used for spare parts. I'm certainly acquiring a nice pool of bits to work off. Hopefully in the next 6 months, both the Black Templar army and Blood Angel army will be fully painted up with all models done. I certainly don't have plans to buy any more which makes this a bit more realistic than when I have said it in the past when I was basically... lying!

I like to think that after this haul and the order from Wayland games (arrives any day now I hear....humph), I should be all bought up for my Dark Angels with the exception of a single biker which will come from Scibor, and this will complete my Librarius Conclave formation.

Hopefully I should have some of this stuff flying onto the blog ASAP for you lovely people to peruse and comment upon.

Time for another arbitrary milestone in my blog. When I got my first couple of months views back I set myself the aim of 3000 views by Christmas. And some point last Sunday evening I hit 10K views and had 300 views in one day for the first time. I still find these things stupidly exciting! Hopefully you are not too sick of seeing me pop up on your blog feed or email or however you follow me! As I said not too long ago the blog is going to be a hive of activity as I put out more and hopefully better content, with more than a few jedi blog masters giving me words of wisdom along the way. Till next time.