Dragutin - Commander of the Black - Fluff 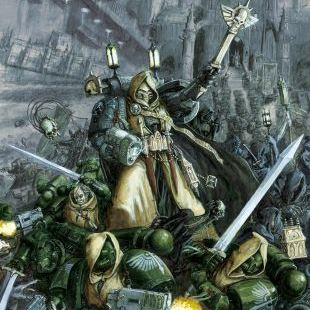 Just a little fluff for you today on my Black Hands of Caliban Company Master - Dragutin...

Dragutin had made his name as a Captain of the First, his promotion had been part necessity following the untimely death of his superior Captain Triontis. The Captain had led a final charge into a gigantic conglomeration of a daemonic horde, the very corpses of the fallen dragged together to create an unholy amalgamation of rotted and fresh remains animated by the Great Unclean one. His heroics had bought them enough time to retreat, but the image if Triontis held in the great maw of that beast, its acidic drool carving the armour and flesh from his bones had been burned into the mind of Dragutin, and it had lit up his life with a fever. And this fever burned deep.

Teleporting aboard the flagship Diastales, the command for Exterminatus rang out. The clarion calls that ran through the vox network crackled down the 3 miles of the Gothic age cruiser to the weapon systems battery. Minutes passed before the serfs in command of the hyperphasic plasma core returned call, the vox reduced their voices, which had not the boom of a space marine, to a mere haunted whisper, like a person lost in the nodes of the network. The crackle made it almost inaudible, but the key word floated through the air and had more power than any other. Non-operational.

In the exchange of fire that had preceded the deep strike assault on Loradan V, the Black Hands had survived almost unscathed compared the foul chaos frigate that they had sent plummeting to the planet surface, its detonation lighting up a full third of the surface and causing planetary crust to bloom into the cold reaches of space. However it transpires they had not escaped unharmed. The hyperphasic cores main transmission line, a plasteel wrapped core of superconductive fluid diamontium had been perforated and the fluid had become flotsam in the space beyond. This they could not repair.

The darkness swirled, a dense thick night through the fallen hive. An irradiated sun bounced around the curvature of the planet striking the two moons high in the sky casting glittered light down overhead. The broken architecture of the Hive however, served to shield them from its cold illuminating light. Inside, it was the shadows that ruled and these were not ordinary shadows...

The sensory circuits of his helmet would pierce any normal gloom, but no vid-capture nor cogitator analyser of any human made variety would make sense of the foulness that had bred in the depths of Hive Exvillion. Dragutin knelt to one knee and placed his hand to the floor, even through the ancient and sacred Black Lion Armour that he wore, he felt it. And it felt him.

"The only recourse is to attack". The stunned crew of the Diastales looked to the blood smeared giant Astartes who stood by the view port, his dark eyes brooding on Loradan V below. About him, the dark eyed sombre marines of the Black Hands joined in their thoughts, the fever of denial, of loyalty through action, of exorcism of the sins of the father, all these raced through them like a current in the blood, an electric shock to the system.

The transformation was intense. Where these few souls had but moments before been battered from combat and taken to within an inch of defeat, they were now heaving at the chest, sweat dripping down their cheek to given an eerie sheen, a maddening twitch coursed through them all, none more so than Dragutin. But not a single person took this for weakness, as these few Astartes now looked so god like in their belief and power as to be able to tear the arms from The Despoiler himself.

Hitting the ground running, the Astartes of the first company and the blood of the first legion appeared at the points of the compass around the dread beast, tactical dreadnought armour, so lumbering in normality appeared now to weigh less than air as they leapt and danced beyond the reach of the beast. The noose closed as they advanced, 2, 3 ,4 of their number were caught in quick succession, but still they advanced with dread eyes and cold blood.

Rising from his knee to face the darkness, he repeated his order to hold clear through his vox communicator and gave the affirming code "Emperor's Judgement". Should he not return his command would be fulfilled and none would leave here alive, if they had ever lived to begin with.

His hands, clad in the grey of a faded midnight, a darkness touched by light, wrapped around the shaft of Entelia the Deliverer. This was a weapon that had fought the Darkness for over three standard millenia, passed from each bearer to a successor of his choosing. No position gave you the right to wield this, it was by merit alone that it ever graced your touch.

With the slightest of movement, it blade, resting at the end of a 4 foot hilt, crackled into an electrifying orange light, magic to the uninitiated, power to those he knew. Dragutin had a frame of primordial power, he towered over even his brother marines, some whispered words of heresy about it dramatically transformed size following implantation of the 19 organs. Some whispered of Attias...

The Great Unclean One thrashed as they climbed its bulk and hacked at it limbs to expose the core of its power. Dragutin's sword flashed through the air in a spark of light and cleft a great wound to its centre, entrails erupting from its innards, a vast fountain of pestilent gore. Enraged the demonic beast howled and gurgled and smashed Dragutin from his hold crushing him into the floor.

Half his helm and been torn clean through, a sharpened humerus from the beast had punctured his right lung and he felt such pain as he never had before. The creature rounded on him, alone at last as his brethren had fallen to a man in brave servitude of the Emperor. Its form, smaller for their work festered over to him, the great wound in its stomach continued to empty bile and and acid and part digested consumption to the floor, it washed up to Dragutins feet as he struggled upward, the pain in his chest impeding his movement, several bones appeared crushed though his muscles bunched up in response holding them stable like a cast.

In this darkest of hours, he felt for the first and last time, a crack in his faith, a crack in his shield of hope. But then, his eye was caught, Entelia! Captain Triontis's sword, a relic of the black hands imbued with ancient power and been swept from the beasts guts within reach. Steeling himself, Dragutin leapt fully waist deep into the beast miasmic ooze and swept Entelia with both hands into the Unclean Ones wound, to its very core.

When he awoke, Dragutin, was no longer a Sergeant, but Commander of the Black, Captain of the First Company of the Black Hands of Caliban. And so his story began.

The darkness moved. And the blade of Entelia swept up to meet. Mad eyes stared at the incorporeal, a scream of fury and pride, pain and denial rent the air as he advanced. Hack, slash, parry and lunge, over and over Dragutin advanced on the beast till with a gust of wind from the warp it withdrew and light returned around him.

His dark eyes remained fixed on their bearing, the course had not changed. The darkness had simply grown tired of its toying and drawn into itself its whole being with which to strike down with its full fury. A rustled breeze came out from the final shadow, a snapping of hard bone sounded from beyond, with clawed scraping across a fallen plasteel  plate.

Looming from the darkness came the great winged beast, its blue hue shot with sickly glow of the warp and its giant hooked beak a polished bone white snapping at the air. The keeper of secrets whispered no words in it hate, but its eyes glowed a crimson furious red before a sharp change to a still green like the view of a sea in a storm from the calm of space.

Keeper of secrets? The first legion knew of secrets. And it feared only one.

Entelia flashed through the air, a spear of light and hope that cut deep into the wing of the monster, Dragutin advanced cutting left and right, running the blade from south to north in a deadly upward strike. The screams of the beast alone would have twisted the fabric of reality for lesser mortals even some Astartes would have been vexed and confounded, but Dragutin was more than a man and more than a normal Astartes, he was the redeemer, the personification of atonement for the hate and betrayal that had given birth to all that they knew. And he would win.

Trudging through the hive, he gave little care for the lost. For they were dead and free to be at one with the Emperor, whilst he still lived and still burned with the shame of his progenitor, not single day would cure of him this ill, but perhaps a lifetime of days would.

Stepping out into the cold dual moonlight, he looked at his men and nodded. There was work to do.

I hoped you enjoyed the dual story layout of this post. I think the grammar probably is quite poor but its not a strong point! As long as you enjoyed then that's OK by me!