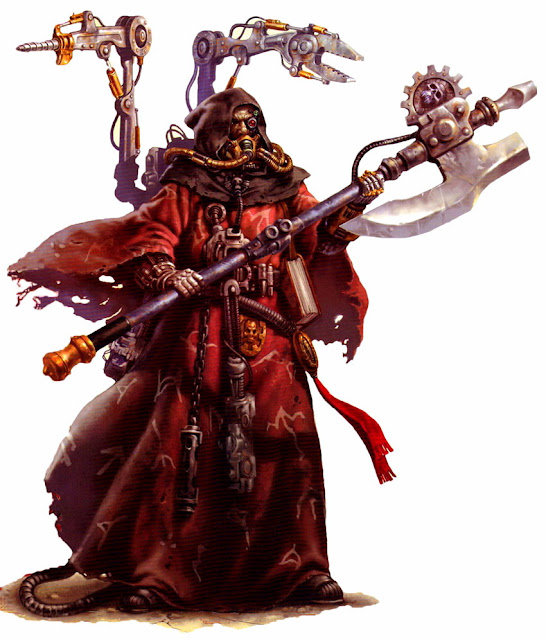 Taking a break from the more heretical sides of the Mechanicum, today I will elucidate the rules of Caleb Decima. Shot down in a furious fireball to the surface of Isstvan III, Caleb Decima survived and fought back, some might say he even flourished. The Traitor Mechanicum rightly feared his power of mind and body.

Caleb Decima is a member of the Ordo Reductor and destruction lies in his wake.

Decima doesn't have the most impressive stats to be honest, but his rules and other upgrades do make him a good choice in the end. His base stats are as below:

So decent strength and toughness, though his toughness does include his machinator array in the profile so it actually sits at 4 but as the machinator array is none optional its basically 5. The 3+ save will hurt but he does have a few boons up his sleeve to help negate that a little. 3 wounds puts him in the mid tier HQ choice at this point.

Overall - Not a bad statline but nor exceptional in any way. For 175 points you might be expecting more...

Like many of the mechanicum characters, Decima comes choc full of special rules. Below are the generic rules you can find in the 40k rulebook.

A good list to be sure. With Stubborn and LD10 you aren't going to be failing often at all and battlesmith plus the machinator array means you will repair on a 3+. Precision shot helps with the Melta gun that is built into his machinator array as well for sniping any power fist sergeants you meet.

As well as these rules he has several unique rules that are pretty damn awesome.

Bodyguard - Decima can be accompanied by a unit of Tech priest Auxilia (with the Reductor arcana a mandatory selection) or a unit of Scyllax Guardians. Neither of these will take up a slot in the force org table and count as the same HQ unit.

Master of Destruction - All of Caleb Decima's attacks (doesn't specify close combat or shooting so BOTH) have the Sunder special rule for extra iron breaking goodness. Additionally any roll made my himself on the damage table is modified by +1 which IS cumulative with AP bonuses and for open topped. So with a melta gun you can blow an open topped vehicle on a 3! The best part of this though is that he can confer this rule on ANY heavy or ordnance weapon on a friendly vehicle or unit within 6". This includes a transport he is embarked upon.

So you can grant sunder and +1 to damage rolls to the ordnance 4 gun of a Krios Venator if it is within 6". Very tasty.

Walker in Ruin - A really nice an flavoured rule to represent the warfare fought on Isstvan III. He and any unit he joins are immune to pinning and ignore any penalties from terrain if it is rubble, ruins, trenchworks and minefields. Situational but tasty if you are on that sort of board.

Warlord Trait - Battlefield Analysis - Allows you to nominate a piece of terrain and lower its cover save by -1 which along with other cover save reducing shenanigans in the Mechanicum will serve you very well. Cover is always important so this is always good.

Curse of the Omnissiah - This rule will cause cries of foul play and terror in the depths of the enemy armoured line... This is Caleb Decima's final gambit that puts himself at risk as much as anyone else... He can elect to forgo all his shooting attacks and instead unleash a storm of electromagnetic death on the enemy with the following profile:

Thats right ladies and gents, you can DESTROY pretty much anything below titans in one volley with this beast if the stars align. You will on average pump out 7 shots and hit with 4-5 of them. This also benefits from his Master of Destruction rule so if you roll a pen you can explode! Obviously you could put a snake eyes down and then miss with both, but this is an excellent f**k you in the bag.

OK so Decima has pretty standard equipment that I will just rattle through here. You've got a bolt pistol and power axe that are both master crafted which is fine, you also get a 5++ from a refractor field which is pretty meh, and finally he has melta bombs and who doesn't love those.

Nothing to write home about, but he does have a couple of upgrades up his sleeve that can help. Firstly he can take a cyber familiar for 15 points that pushes that invuln save up to a 4++, I would heartily recommend you do this if you are taking him as your main HQ in lower (<2000 points) games. Secondly he can take Servo Automata to accompany him, but there are better things for him to be accompanying so these can bugger off for the cost of 12 points each.

Thirdly and finally he has the upgrade Decima Invictus. This upgrade represents the battle hardened and bitter Decima following Isstvan III, his body and mind warped in a maelstrom of war and hatred. This upgrade is three times the cost of the cyber familiar and taken together Caleb Decima will cost you a hefty 235 points. BUT this does grant you the Relentless special rule and the Eternal Warrior special rule. He now also counts as an Archmagos and he must be your warlord


Oh he can also take a Macroarid Explorator as a dedicated transport!

Caleb Decima is a truly solid HQ choice that can be taken for either an Ordo Reductor or a Taghmata Omnissiah force, not a Legio Cybernetica Cohort. He brings a lot of buffs to the force which gel incredibly well with the Ordo Reductor specific detachment. I don't really see why you would take him without taking an Ordo Reductor detachment as the buffs stack very nicely.

Without his Decima Invictus upgrade I would only ever take him in small scale games or as a support HQ in a big points game. If you want him to stand as your main HQ then take the Invictus upgrade as not only does this make him more survivable but it also guarantees that he can fire his curse of the omnissiah on the move as IT IS a heavy weapon and he does not have relentless as standard. Plus if he can grant master of destruction to any of the large ordnance tank weapons the Reductors can bring then your opponent will have a very bad day.

I don't look at Caleb Decima and go wow, BUT I think if you play your army with him in mind and design it the same way then he is an excellent HQ that doesn't have a win button unless you have a good tactical mind to go with him. He definitely need a bodyguard and I would be tempted with some Myrmidons of either variety in a vehicle, nice saves and toughness with multiple wounds and a hell of a punch.