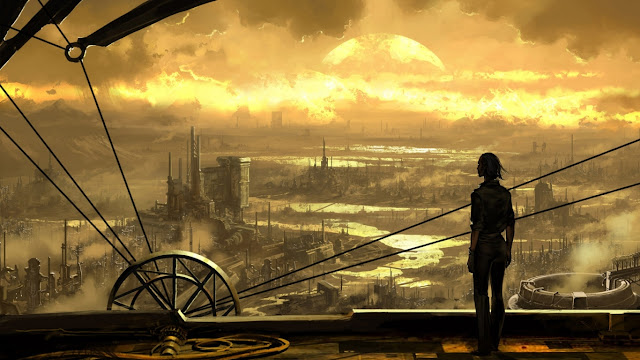 In a little break from 40k I thought I would share a sci-fi short story I entered into a competition some time ago, I didn't win but received commendation. Hope you enjoy!

The dull dust stirred underfoot as I dragged my failing limb through the streets. The dark amber glow through the heavy clouds glinted off the stones’ spires. The intense heat had blasted their surfaces to glass and the soft light made them look wreathed in flame once more; the shifting clouds overhead were reflected as strange leaping shadows of fire across their faces. A haunted scream of the ancient dead.

As I passed between the narrow berths of these colossi the dim whirr and click of my failing leg peddled a melancholy tune. I hummed along, as I had grown used to its dying sing-song and sorely wanted to commit its rhythm to memory. I imagined I could fondly recall its service once it was necessarily cast aside through the hum hum humming I practised.

Sitting myself down upon the wayside (for to still call it a roadside would be supremely generous) I removed my trusted fork and flicked open the chrome-etched fascia of my calf. The three little prongs were apparently ideal for eating cake, though they served exceptionally well as a key to my inner workings. I continued to happily hum along as I cleaned the grit and ash from the mechanisms in an effort to slow the decay. Briefly, as always, I wondered what percentage of this nuisance dirt used to be people. My humming stopped upon that sad thought and I stared deeply into the tiny little maze of rotary metal that kept me limping on.

Tears did not form, as they never could. I had of course seen the videos in my youth of tear-stained cheeks soaked in forlorn love, pain or anger. They had fascinated me then, as they still did now, but I no longer had anyone to share that fascination with. There had been others, but they had chosen to forget and to sleep the long sleep. Those custodians had felt no desire to remain manifest in the world of grey and shadowed flames and so had put themselves deep into the ground free from the clogging dirt and erosion of time.

Raising myself from the wayside, the whine from my intricate innards brought a facsimile of a grimace to my face. Spare cogitators had been far easier to obtain in the early days. Not all custodians had survived and as much as the act of cannibalism felt inherently anathema, that grim task was faced with a resigned air of necessity spurred by my faith in the creators’ design for new life. High on the hill beyond the limits of the spires I had buried those dismantled wretches, each marked with the multi-coloured orb of the creators, a symbol of all we strove to return to the world.

As I reached my journey’s end my ocular motors slowly focused on the shelter that was my home with a mixture of pride and sadness. The semi-cylindrical poly-tunnel had taken months to construct. My arms had not originally been envisaged to bend rods of metal and it had proved challenging to provide a consistent curvature; though this difficulty had paled in comparison to removing the rods themselves from the rigid glassified rockrete in the first instance.

Plastex sheets formed a fine dome over the wrought framework, intensifying the light that entered through the dying sky to illuminate the cathedral of my world. The door to the tunnel with its glittering multi-coloured glass window always felt out of place on the front facing end, and in hindsight the columns that flanked it may have been a bit much, but then I was always prone to the ostentatious. But I could not resist laying such grandiose designs at the door to the new world from which the sweet breath of life would exit and cool this burnt land.

Continuing my lurch through the door, the fruits of my labour greeted me and pride at my persistence rose in a strange binary flutter. The sickly green and yellow leaves didn't dishearten me in the slightest. I was the life bringer to these ash wastes, rekindling the cycle of carbon and oxygen that had once dominated this world. One day greater life would return, though I would not be there to greet it.

Bitterness rose in my chest then, a hardened anger at those ageless, lifeless hulks in their living tombs beneath the ground. The custodians had been the last great gift to the planet and yet they had refused their calling, and had adopted the selfish, self-destructive cycle of the past. Immersed in selfish, destructive apathy they had been content to let the world die and do nought but hope for a miracle.
I was the miracle. I was the cure. I was God to a godless world and yet they, not I, would reap the fruits of my Eden when it finally arose. When all my cogs had long since ceased to turn and even my micro-fusion reactor had failed they would rise and they would not remember me! I had done my duty and brought this world back from the brink.

Sitting down on my polished chromium sleep-well, I sighed a sigh that moved not at all my empty chest and traced the etched words across its front, each precise line returning calm to me as I intoned the letters of my name out loud: