So today I am going to do a quick pass through the Scyllax Unit, as I have just acquired one and its always nice to cement in your own mind the sort of things you want that unit to do when they are on the tabletop. They are a funny troops choice for the Mechanicum but they do have a role to play in army selection.

Scyllax are NOT battle automata as they like a cybernetica cortex. This means that like Thallax they are scoring troops for a mechanicum army which is nice!

So very much a mixed bag here. We have decent resilience with T5 which will prevent being doubled out by anything short of S10. But other than that we don't have anything exemplary and only a LD of 7. These guys come in units of 4 for 155 points base. Thats 20 points more than Thallax for 1 more models but net 1 less wound. You also lose 6+ FNP, Stubborn at LD8 and also S5.

You can however take an additional TWELVE if you want too. These cost 35 points each a pop.

Overall -  In terms of their basic stats, the Scyllax don't compare favourably to Thallax except for their increase in number of bodies.

GAPS means that if the unit is withing 24" of any model with either the cybertheurgy or battlesmith rule (so HQs or Tech priest auxilia pretty much) then they are fearless. If they are out of range they must take a LD test, a fail means they have to stay still but can shoot, being in combat means they fight as normal.

The GAPS goes a long way to buff the LD7 Scyllax by making them fearless, which can be excellent for tying up a unit that might struggle to get past T5 with regularity. Move through cover and relentless. as we'll see are also extremely handy.

Scyllax have 4 standard pieces of equipment. These are carapace armour for your 4+ save and then a Scyllax bolter, a Rad Furnace and finally a Mechadendrite Combat Array.

At S4 and AP5 with 2 attacks base, there isn't much to write home about with these guys, plus they will only be hitting on 4's pretty much all the time. However Maelstrom means any to hit roll of a 6 immediately generates an additional attack roll for the Scyllax model. This as standard cannot generate additional attacks. This will buff your number of hits slightly but nothing to write home about.

Dismemberment however, allows you to swap all your attacks for a single attack with the following profile:

This puts your attacks up to S7! So close combat plasma. This becomes important when you take into account their Rad Furnace equipment.


The Rad Furnace represents the power source for the Scyllax and its leaking deathly radiation that spills out in battle as they vent it from their reactor core. This means that any models locked in combat with the Scyllax (including friendlies) have -1 to their toughness. This now puts marines at T3 and therefore a S7 attack will INSTA-KILL them. Very tasty.

Additionally, the Scyallax are immune to the rad furnace effect and poison or fleshbane weapons only ever wound them on a to wound roll of a 6. Tasty.

Decent range, strength and even AP for a basic weapon. But as a unit that appears to be setting itself up for close combat the rapid fire aspect renders it near useless when within charge distance. EDIT - Relentless means you can charge after rapid fire - courtesy of Mr Short in the comments :)

The Scyllax have quite a few upgrade options available to them and many are worth consideration. Any number of Scyllax can replace their Scyllax bolter with either a Rotor Cannon, a Flamer, a Volkite Charger, or indeed an Enhanced Array. The Enhanced Array simply grants +1 attack.

They all pump out low strength high volume attacks. The volkite charger is my favourite because it can cause additional hits with deflagrate. The rotor cannon has high rate of fire but only at S3, these are better on Vorax so steer clear. Flamers are flamers and will do well against cover.

One in 4 Scyllax can replace their bolter with a Melta Gun, a Graviton Gun, an Rad-Cleanser or a Plasma Gun. Though you pay a premium of 20 points for the last two of those.

Personally I would only ever get a rad cleanser, but mostly would avoid the 1/4 upgrades as you start putting to many points into the unit of 4+ save guys then!

The whole unit can take frag grenades for a mere 10 points and then finally, the unit of Scyllax can also take a Triaros Armoured Conveyor as a dedicated transport. I will deal with this in its own review post. 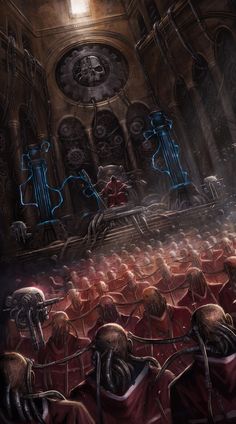 Scyllax are an odd unit but one that I think can do well when used right. Out and out I think Thallax are generally better. This comes due to their increased strength and ability to take upgrades such as rending close combat assault and tank hunter for fixed costs regardless of the unit size.

However, with a basic unit of Scyllax, you will on average with a dismemberment attack kill 2 marines regardless of their wounds, unless they have an invulnerable (likely as probably have terminator armour) or eternal warrior. The problem comes with striking at I1 and not being particularly tough to start with.

I think to take Scyllax I would take a fairly large unit. 8 will cost 295 points before upgrades. BUT that will put out 24 attacks on the charge that will on average generate an additional 4 attacks. 28 attacks hitting on 4's wounding on 4's resulting in 7 wound average. Plus the option to make 8 S7 AP2 wounds that are effectively instant death to anything T4.

8 Thallax will cost you 335 points and put out the same number of wounds on the charge more or less but no ability to guarantee AP2 if you need it.

The Scyllax come in to their own when you give them some protection like a Triaros conveyor and Volkite Chargers. Yes you will be spending a lot of points but these guys will SHIT out wounds on your opponent in both the shooting and combat phase. This sort of unit will only really work in large points games as it comes in at about 500 points for an 8 man unit in Conveyor with volkite chargers. But any blob squads of marines SHOULD be afraid of the damage output these guys can do. Plus you also have one of the best dedicated transports for troops in the game in my opinion.

A tricky unit that I think comes on par with Thallax but whether or not you take them will depend very much on how you like their aesthetic and how you like to play. The Thallax give you a little more manoeuvrability but without upgrades they can really suck with such low shot weaponry and less effective combat.

I'll leave you guys to decide :)